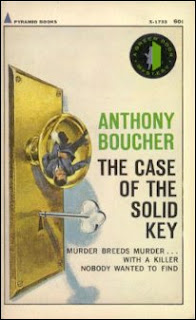 Californian science-fiction writer, anthologist, reviewer and author of seven detective novels and numerous short stories William Anthony Parker White, known better under his penname Anthony Boucher (which rhymes with voucher), was one of the most important figures in the genre, perhaps only second to Fredric Dannay, whose critique and insightful comments on the works of his fellow composers in crime were especially significant – and which are still heavily consulted today by readers and historians alike.
He also appears to have been an admirable and multiple talented human being, who, despite lifelong health problems culminating in an early death, enjoyed life to the fullest and only had something bad to say about Mickey Spillane (LOL!) – and what better way to squeeze as much enjoyment out of life as humanly possible than by plotting and writing detective stories?
There's definitely a lot to enjoy about The Case of the Solid Key (1941), which features his redheaded shamus, Fergus O'Breen, who was created as a West Coast version of Ellery Queen, however, he's much closer to your typical gumshoe than the brilliant amateur reasoners of Ellery's ilk.
The majority of the plot focuses on what goes on at Carruthers Little Theater, a small theatrical company dedicated solely to selling contracts of young and upcoming actors and writers to Hollywood agents, but the opening act takes place in a restaurant where Norman Harker, an aspiring playwright, saves one of their actresses, with whom he promptly falls in love, from an embarrassing situation by paying her bill. One thing leads to another and the next thing he knows he's neck-deep in the muck and none of it seems to stick.
There's no discernible reason why Rupert Carruthers, the manager director of the place, should produce an awfully bad play, entitled The Soul Has Two Garments, by one Lewis Jordan, a shabby old man with a turbulent past, or why a detective from homicide is poking him about a 13-year-old murder case and why Fergus O'Breen is snooping around the place in the guise of a wishful actor. Of course, with a detective in the middle of it all it doesn't take very long for the inevitable corpse to rear its ugly and badly burned head – found inside a workshop with all doors and windows securely locked from the inside.
It's a very readable story that offers the reader a picture of Hollywood of the 1940s, and the struggle of young talent to make a name for themselves in this world, as well as an interesting problem in which the clues are, perhaps, a bit thinly spread around, but they're enough for the observant reader the piece together most of the solution before Boucher produces a neat little twist on an old trick – resulting in an ending that you can both "solve" and still be surprised at. No mean feat!
The solution to the locked room problem, on the other hand, has an overly simplistic solution, but the reason why the key had to have a solid handle was quite clever and one feels it could've contributed to the book being more well known, especially among locked room fan boys like myself, if the trick had a bit more imagination and originality to it.
All in all, a solid effort by a writer who was better known and praised for his critical work than his writing, but showed some true craftsmanship by springing a surprise or two on the reader with a relatively simple plot.
And on a side note: after my enthusiastic start on this blog my output will probably trickle down a bit in the weeks to come, but please continue checking back here regularly for updates and I will try to vary the subjects of my posts in the near future (i.e. not just reviews).
Geplaatst door TomCat on 2/27/2011