"Experience is the cane of the blind"

"I've reversed the old adage about the land of the blind where the one-eyed man was king. I've become king in a land of two-eyed detectives, none of whom know how to see as well as I do."
- Captain Duncan Maclain, The Last Express.

Baynard Kendrick's second detective novel, The Last Express (1937), is the first entry in what was once a very popular series chronicling the extraordinary adventures of Captain Duncan Maclain, a private investigator who lost his eyesight during the First World War, but through rigorous training he sharpened his remaining senses – turning a defect into virtue and conquering his darkened world by successfully applying his newly garnered skills for detective work. This makes him a rather unusual combination of the traditional detective and a pulp hero.
He can astonish skeptics of his abilities with dazzling, almost Holmesian, deduction, as he does with his client in the opening chapter of this book, but he also has an office studded with high-tech recording equipment and has a subbasement, four floors below street level, where he practice blind target shooting with his business partner and friend, Spud Savage. It's therefore not difficult to see (no pun intended) why Stan Lee saw (no pun intended here, either) in him the potential for a superhero and used him as a model for Matt Murdock – a blind defense attorney who strikes fear into the hearts of the criminal elements of Hell's Kitchen as his masked alter ego, DareDevil. 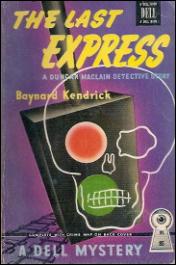 The Last Express opens with the arrival of Evelyn Zarinka, a young and not un-attractive woman, at Maclain's office. Her brother, who's a District Attorney, is crossing swords with a big time gangster and she fears he's deeper involved than is healthy for him, but before the sightless detective can even as much as lift a finger to help her dispel the dangers facing them, her brother meets an untimely demise when an unknown assailant throws a hand grenade into his car – and the only clues the police and Maclain have to go one are the victims cryptic dying words and mangled cage containing a couple of dead mice.
The investigation that follows provides a knotty problem for Maclain's sensitive fingers to unsnarl, but is also fraught with many dangers as the book continuously skips from moments of rational detective work to thrilling scenes of suspense. There is, for example, a second murder, committed in front of witnesses at a nightclub, which takes some considerable thinking on Maclain's part to figure out and a remorseless hit man puts Maclain and Spud in a tough and perilous situation. But my favorite parts of the story deal with a treasure-hunt-like search and exploration of the labyrinthine tunnels, underneath the streets of New York, to locate a disused and sealed tunnel that holds, according to urban city legends, an old wood-burning locomotive and the end station of their dangerous journey for the truth.
It's a good and fast-paced read, with some frantic and harrowing moments, that throws a couple of fairly interesting puzzles into the mix. However, it's this hodgepodge of styles that inevitable dulls the detection part of the novel and leaves the reader a bit dissatisfied with the overall experience. The method employed at the nightclub, to temporarily obscure the murder, and the reason for the D.A. to carry around a bunch of mice were adequately and satisfyingly explained, but the interpretation of the dying message and the identity of the guilty party felt like a letdown.
I can recommend this one to readers already familiar with Baynard Kendrick and Duncan Maclain, but if you're new to them a better starting point would probably be The Whistling Hangman – a novel of detection without the trappings of the thriller and suspense story.
Geplaatst door TomCat on 3/02/2011