"Is all that we see or seem, but a dream within a dream?"

There's not much that can be said about Sydney Hobson Courtier, since the only biographical details available online are rather summary – confining to the rudimentary facts that he was an Australian teacher who authored twenty-six detective novels. Most of them featured either inspector Ambrose Mahon or his colleague 'Digger' Haig, who's at the helm of Courtier's 1959 novel Death in Dream Time. 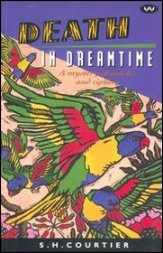 The story embarks with an unaccountable SOS, from an estranged cousin, summoning shopkeeper Jock Coreless over hundreds of miles of land to an Aboriginal themed amusement park, called Dream Time Land, but before arriving at his destination he witnesses the aftermath of a fatal roadside accident – and is stunned when he recognizes his own flesh and blood in the mangled remains sprawled on the asphalt. Somewhat thrown off his balance, he neglects to make his presence, and kinship to the victim, known to the police officers at the scene, and jumps back in his car for the final leg of his trip.
Upon arrival, he's trust into a tense situation as he confronts a grudging assembly of characters who stalk the grounds of Dream Time Land, and they're unanimous in denying that his late relative was in their debt. But why, then, would he claim to have creditors when his slate was clean, and why chuck a sharpened bone, dipped in snake poison, at Jock if there's nothing underhanded going on at the park? Along side 'Digger' Haig, of the Brisbane police, they explore the park for answers by accompanying a group of tourists on their tour of the place – passing many breathtaking dioramas, depicting the Aborigine story of creation, while interrogating suspects and deciphering the hidden code, which holds a horrifying motive for a handful of murders, encrypted in the SOS message.
The plot of Death in Dream Time is decent enough, especially for a detective novel that can be considered as a product of the modern era, but where this book really excels is in its effective use of the theme park setting in combination with insightful information on Aboriginal folklore – producing a few evocative scenes of mystery and imagination. The characters, however, with the possible exception of old Austin Flax and his cursing Cockatoo (who definitely has a touch of Fowler's Arthur Bryant about him), are a shade less colorful than the surroundings they inhabit – and far less interesting than its plot, but that's a minor quibble, really, as the book maintained my interest until the final page.
If you enjoy reading the works of Clyde Clason and Arthur Upfield then this book is absolutely worth tossing on your pile of unread books.
Geplaatst door TomCat on 3/22/2011