She Looked So Startled 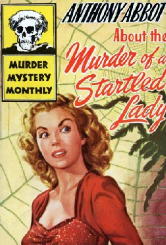 I'm certainly no authority on Anthony Abbot, having read only two of his novels, About the Murder of Startled Lady (1935) and The Creeps (1939), but according to the introduction of the former Abbot was the alias of a well-known novelist, Fulton Oursler, who turned to detective stories in the early 1930s – and what I gathered from them was that he was an early practitioner of the police procedural in the Van Dine-Queen mold. Just like the aforementioned writers he was a plot-orientated writer who casts himself in the role of Thatcher Colt's narrator – a debonair Police Commissioner, who can be seen as a combination of Ellery Queen and his father. And all but the last two titles in the series begin with About the Murder of [a Person], which is akin to Van Dine's The [Six Letter Word] Murder Case and Queen's The [Country] [Noun] Mystery novels.
However, that's where the similarities end: whereas Van Dine and Queen have detectives who make incredible deductions based on mathematics and arcane knowledge, Thatcher Colt has an entire police department at his disposal for proper, methodical police work and early forensic methodology.
The case at hand begins as a simple, straight forward and routine police job of pulling in a couple of self professed spiritualists, a wife and husband, who were giving private séances and exhibiting ghosts at three dollars per exhibition, but when frisked the police exorcized a ghost from the mediums bosom – i.e. forty yards of cheese cloth daubed with luminous paint. But in the face of this overwhelming and damnable evidence, they maintain that they're legitimate mediums with a direct line to the spirit world. Not only that, but recently they have been making contact with the ghost of a murdered woman whose body has never been found.
Thatcher Colt is more than a little skeptical, but lets himself being persuaded by their champion, a professor turned psychic investigator, to give them the benefit of the doubt and an opportunity to vindicate their assertion of mediumship. The result is a spook show at Centre Street, in which Colt apparently receives a first hand account of a gruesome murder from the Great Beyond – detailing the horrifying circumstances in which a murdered woman, named Madeline, was dismembered and put into a watery grave.
She's even able to give an exact location of the spot where the murderer dumped her remains, and, to everyone surprise, they find a heavy box filled with a skull and bones. Unfortunately, for the police, the girl was shot through the head and therefore her ghost is unable to remember her last name or identity of her butcher (convenient, eh?). But Colt does a bang-up job at identifying the girl in less than two days by employing a skilled forensic sculpture to reconstruct the face on the skull, and from here on out the story concentrates on fishing the murderer from a small pool of suspect – ranging from her religiously fanatical father and a unbalanced half sister to a swinging boyfriend and his dominating sister, and the two spiritualists who knew more than they were letting on.
The apparent supernatural knowledge of the mediums is a neat variation on the impossible crime story and is adequately, if a bit dully, explained. Its main problem is that I have seen other writers propose more inspired solutions for this type of miracle problem, but otherwise it's an excellent and competently plotted detective story with a great dénouement – set in an operating room where the doctors are in the progress of stitching together the second victim.
Geplaatst door TomCat on 3/06/2011