Of Ancient Gods and Family Skeletons

In recent years, I've developed a strong affinity for the American detective story. Not the hardboiled variety of Dashiell Hammett and Raymond Chandler, but the more traditional approach of Van Dine's literary descendants, such as Kelley Roos, Ellery Queen, Clyde Clason, Anthony Boucher, Stuart Palmer and Craig Rice, as well as some of the post-GAD era authors like Edward Hoch and William DeAndrea.
The plots these writers crafted were usually adroitly plotted and the often specialized milieus offer up an intriguing picture of a bygone era or providing the reader with fascinating nuggets of arcane information – like in stories set among collectors who own private museums, filled with antique weaponry or artifacts from an ancient civilization, or depicting the inner workings of an early 20th century company. But more than that, I enjoy them for their "Spark of Life," which seems to be deficient in a lot of British mysteries. 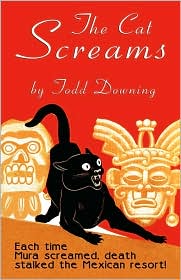 For those reasons, I was looking forward to reading The Cat Screams (1934) by Todd Downing, as it seemed to have all the ingredients for a classic American detective story: a hotel in Mexico under quarantine, where violent deaths are presaged by the wailings of a cat, situated in a area, inhabited by many American colonists, plagued by an epidemic of suicides, while old superstitions and antique masks of archaic deities hover in the background.
With all these intriguing plot threads at your fingertips, it's hard to fathom how anyone could churn out a fabulously mundane and sluggish story, devoid of any pace or a graduating tightening atmosphere that should spring naturally from the given situation, but Downing managed to do it. Nobody seems to be worried about the unidentified disease that is slowly killing a young Mexican and how that effects their quarantined condition, and the sudden, violent death of several of their fellow guests is met with almost complete indifference – only towards the end of the book some of them start to show some strained nerves at the sound of the foreboding screams.
Thankfully the book still had a plot with a couple of clues thrown in and a somewhat decent solution, but the only remarkable feature is really just how unremarkable the whole story is. Clyde Clason did this type of detective story much better and more convincing in The Man from Tibet (1938), and has a locked room mystery to boot! 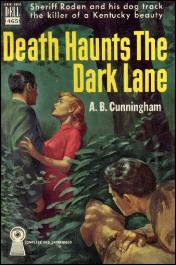 A.B. Cunningham's Death Haunts the Dark Lane (1948), on the other hand, provided a more stimulating challenge to the reader, not only that, but also exhibited that a plot can be elevated by inhabiting the story with well-drawn characters set in a detailed painted surrounding. Here the back drop for murder is the rural town of Deer Lick, where Sheriff Jess Roden has to track down the murderer of a young heiress and bride-to-be who was stabbed to death with an unusual weapon that leaves a bullet-hole-like puncture – a problematic job that involves dragging the rattling skeletons of the county's most influential family from their cupboards.
One of Cunningham's fans was critic and fellow mystery writer Anthony Boucher, who wrote laudatory reviews of his books in which he praised him for depicting convincing backwoods people and the regional flavor of his stories – and judging solely from this book, I can definitely understand his enthusiasm.
The plot provides an intriguing problem for both the reader and Jess Roden, who's a pleasantly active and human detective (somewhere between Roger Sharingham and Inspector Boney), and even though the family, at first glance, appear to be the stock-in-trade dysfunctional family, that overpopulate our beloved Cloud Cuckoo Land, they are convincingly drawn. Heck, where most modern crime writers need hundreds of pages to flesh out intricate family relationships, full of angst and flashbacks of incestuous childhood experiences, Cunningham only needed half a chapter to explain the animosity within the murdered girl's family. The only thing that marred the story is that the clueing wasn't as strong as it could've been and being rushed to a hasty conclusion weakened the ending.
Still, despite a somewhat poorly executed ending the book's good enough to warrant a further investigation of this writer, who, at one point in time, seems to have been one of the top second-tier names in the field, but is now almost completely submerged in Lethe.
Luckily, there are books out there, like The Anthony Boucher Chronicles, to guide us through the past and introduce us to writers that did their part, however small, in shaping the detective story.
It's been a fun and interesting Odyssey so far!
Geplaatst door TomCat on 3/13/2011