Frances Crane, the Many Colored Death

The motley-colored titles that Frances Crane gave to her detective novels always conjured up a mental image of a careless and cheerful woman, who wrote jovial and lighthearted whodunits, but that picture was a bit disturbed after reading a short summary of her life. I somewhat fell in love with her when I read how she was thrown out of Germany for openly mocking and criticizing the new Nazi regime, but was also a bit saddened to learn of the tragedies that plagued her family and that she had more lofty ambitions in mind with her literary career. On a brighter sight, the mystery genre gained from the lost suffered by mainstream literature – selfish though that thought might be. 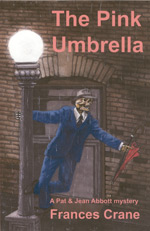 The Pink Umbrella (1943) is my first encounter with Pat and Jean Abbott, a husband and wife sleuthing team that were all the rage at the time, and was the fourth book in the series but the first one in which they were married. Unfortunately, their honeymoon leaves a lot to be desired. Pat had just enlisted in the Marines and will be shipped off to war within a few days, which doesn't leave much time at all to enjoy each other's company in a blacked-out New York City, where they don't know a soul. Or at least, that's what they thought.
They bump into an old acquaintance of Pat's, Ellen Bland, now living in America, with her archetypical dysfunctional family and assorted cohorts, after fleeing occupied Europe. Murder ensues! But contrary to time-honored tradition, it's not one of her family members, like her nasty, controlling ex-husband Louise or their 16-year-old son, Dick, who already knows how to hit the bottle, who meets a sticky end, but their sour-faced and ill-mannered housekeeper. It's an understatement to say that the old crone had an unattractive personality, however, caving her head in seems like a drastic measure to terminate her employment when a pink slip would've sufficed. Pat and Jean lend their invaluable help to New York's finest in uncovering a ruthless murderer.
Crane wrote a fluid story, almost in a careless manner and a loose style, that gives the story a touch of gaiety that's very becoming of this particular type of mysteries, but the plot left me under whelmed. The clues are not liberally thrown about and the motive for the second murders borders on cheating – making it very difficult for the reader to have an equal shot at arriving at the same conclusion as Pat did. His explanation also relayed too much on shaky amateur psychology (saying that this person was the only one with the personality of a cold blooded murderer). I really wanted to like this book, and did like some of it, but as a detective story it left me frigid.
However, if you're one of those detective fans who enjoy reading mysteries for their characters, without paying too much attention to the clues and plot, you'll probably enjoy tagging along with Pat and Jean. Otherwise, I recommend taking a look at the books by Kelley Roos and Delano Ames.
Oh, and kudos to anyone who spots the (obvious) reference to my favorite book. Here's a hint: it's not a mystery. Good luck!