The witty and cleverly constructed detective novels by Kelley Roos, a joined pseudonym of the husband-and-wife writing team of William and Aubrey Roos, was one of the greatest serendipitous discoveries in my never ending quest for great-but-forgotten mystery writers – and on my list of personal favorites they rank almost alongside the unexcellable John Dickson Carr.
When they were at their best, they managed to combine a sparkling sense of humor and some risible banter, between the two protagonists, a wisecracking, mystery solving couple named Jeff and Haila Troy, with clever and well thought out plots. These qualities are most evident in their 1942 novel, The Frightened Stiff, an unsung masterpiece, in which the recently married couple move into their first apartment that turns out to be a former speakeasy (one that Jeff used to frequent, much to Haila's dismay) and comes with a naked corpse in the garden who was drowned in their bathtub. Hilarity ensues! 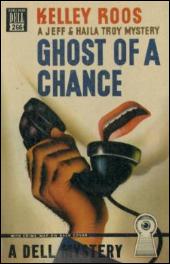 Ghost of a Chance (1947) is a bit different from the other Rooses I have read thus far and starts off with an ominous phone call from a stranger – asking Jeff's help in preventing the murder of an unnamed woman that is about to take place any minute. Well, the Troy's never been the ones to pass up a good mystery and follow a trail of instructions that eventually leads them to the subways, only to find the man's exanimate remains on the tracks and they are rather skeptical of the whole drunken accident theory the police cooked up. As a result, they find themselves faced with the daunting task of preventing a second murder in a city with several million potential victims!
What follows is a race against time, as the Troy's tramp about New York in search for leads that will help them safe a life, but almost everyone they meet along the way seems to be part of a sinister conspiracy and will stop at nothing to prevent them from reaching the intended victim. But despite the odds that are stacked against them, and the many dangers they have to dodge, they keep a level head and their recognizable sense of humor, which makes the book somewhat reminiscent to other humorous chase novels such as Crispin's The Moving Toyshop (1946) and Carr's The Punch and Judy Murders (1937) and The Blind Barber (1934).
Now, granted, this might not be the most ingenious detective story ever conceived, certainly not by the Rooses own standards, but tagging along with Jeff and Haila around town, sidestepping or crawling out of dangerous pitfalls and snooping for clues, is just plain fun and offers the reader a picture of a time when mysteries were allowed to be diverting and entertaining.
If you're new to Kelley Roos, I recommend you check out some of the recent reprints by the invaluable Rue Morgue Press and make their acquaintance through The Frightened Stiff and Sailor, Take Warning!
And on a side note: I have noticed that most of the detectives reviewed here, so far, have rather unconventional plots and therefore I promise that the next book will be a more traditional mystery.
Geplaatst door TomCat on 3/05/2011