"You are remembered for the rules you break"

After several rewrites, I have come to the conclusion that this isn't going to be one of my better critical pieces, but here we go anyway: 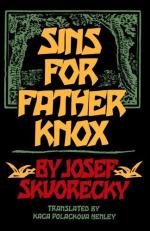 During the waning years of the 1920s, a clique of notable mystery writers were starting to form a closely-knit gang, who called themselves The Detection Club, and codified a set of rules, which became known as "Father Knox's Ten Commandments for Detective Fiction," to lend an air of legitimacy to their mob. And it amuses me to no end to imagine Berkeley, Christie, Freeman, Sayers and Bailey restlessly waiting in the lobby of a hotel, when, all of a sudden, Knox comes strutting down the stairs, after a long and exhaustive conclave with Chesterton, triumphantly raising the ten commandments above his head. But I digress.
The stories collected in the volume Sins for Father Knox (1973), penned by the Czech novelist Josef Skvorecky, take the rules set forth by the clergyman and use them as a framework for a little less than a dozen diverting, offbeat mysteries that simply refuse to adhere to them. Skvorecky deliberately breaks one of Knox's commandments in each one of his stories and then directly challenges the reader to deduce, based on the clues given, which one he has disobeyed – as well as finding out who-and howdunit!
A short overview of the stories:
An Intimate Business
The first story serves as an introduction of the main protagonist, Eve Adam, a woman imprisoned for the poisoning of her former beau – a movie director of ill-repute. But the moonfaced, love-struck Lt. Boruvka believes her to be innocent and offers his services in clearing the blotch from her name. This is unfortunately a dull, but necessary, introductory for the stories to come. Just try to bear through it.

Mistake in Hitzungsee
Eve Adam, a free and rehabilitated woman, has picked up her old gig as a sexy, traveling nightclub singer, touring the more fashionable clubs of Europe and the US – and her first stop is at Hitzengsee, where an unusual meeting at a restaurant leads to a burglary and the discovery of a body in a locked room. The story disregards the one rule that is perhaps the most important one for a locked room mystery, but I have to give it to Skvorecky that the cheating here was properly clued and in complete accordance with Knox's commandments.
The Man Eve Didn't Know from Adam
The next port of call is sunny San Marino, where a traffic stop lands her smack in the middle of a hunt for a sex crazed killer, who brutally murdered a young woman, and the only thing the detective in charge, one Capt. Hercule Potarot, has to go on is a sketchy description of a white clad playboy, driving a raspberry red convertible – and there were half a dozen men in the vicinity of the scene who matches that description. It's not a particular ingenious story, but the interaction between Eve and Potarot is enjoyable enough.
A Question of Alibis
While in Stockholm, Eve makes her acquaintance with a peculiar man who claims, that before the night is over, he will be murdered – and his prophecy is fulfilled when his body turns up, but the only suspect sort of has an alibi. However, despite the vagueness of the motive and the defiance of another sacred commandment, this is actually a pretty good story with lots of clues and a nifty floor plan – useless though it is.
Why So Many Shamuses?
Upon her arrival in New York City, Eve lends a helping hand to a homicide detective after chatting with one of the victims in a string of murders – among them, curiously enough, three private dicks. Plot wise one of the better, and bloodiest, stories in the collection, showing some good ideas and a decent amount of ingenuity. It's therefore a bit frustrating that the solution required knocking down one of the more important rules in the codex.

This is a passable, if largely forgettable story in which our heroine finds herself in an uncomfortable, but familiar, spot: as one of the main suspect in a bombing case. Admittedly, the resolution of the crime is not without interest, but overall the plot failed to grab this reader's attention.
The Mathematicians of Grizzly Drive
This is the longest story in the collection, at about forty pages, and has a bizarre plot that begins with Eve purchasing some dirty magazines, for a few of her chums back home, and this somehow develops into a kidnapping that proffers an unusually complex solution. But if you like crunching numbers this is probably as good as a detective story as you'll ever going to find.

A nicely done and charming shipboard mystery, with dark undercurrents drifting back to the atrocities of World War II – and this time the solution isn't hampered by the sinful behavior of its author. Possibly my favorite of the bunch.

Just Between Us Girls

One of Eve's friends narrates a story and steals the spot light. Nothing of particular interest here.

The Third Tip of the Triangle

The prodigal daughter returns home and finds the mournful Lt. Burovka trying to collar the perpetrator of a fatal shooting incident, in which an electrical engineer was killed. It's not a bad story in itself, but the most interesting part was Skvorecky interpretation of one of Knox's sanctified commandments and shows how much society has changed since they were written.
Confessedly, these stories aren't as well told as those written down by Conan Doyle nor do they possess the almost fairytale-like inventiveness and quality of Chesterton, but they do have something truly unique to offer. Here we have a mystery writer who, with malice aforethought, set out to deliberately cheat on the reader, but aptly clues his un-sports-man-like behavior as to give them a fair shot at figuring out how they're going to be duped. He cheats while playing fair! Skvorecky even wrote a section, entitled Ab-Solutions and can be found at the back of the book, in which explains all the clues and confesses his sins.
On the overall, this is an enjoyable book recommendable to seasoned mystery readers who are looking for something different in traditionally plotted detective stories, however, you're bound to be severely disappointed by a few of them. But then again, isn't that the norm for most anthologies?
Sins for Father Knox is still in print and available from various online booksellers.
Geplaatst door TomCat on 3/19/2011