Pick Your Victim (1946): a detective story in reverse.

Pat McGerr's Pick Your Victim is a comparatively little-known entry into the annals of crime fiction, but which is nevertheless held in high esteem among a small group of knowledgeable and well read Connoisseurs of Crime – praising the story for its unique take on the classic detective format, that's both original and successful.
This unique approach to the formal detective story is basically telling it backwards: you start with the identity of the murderer and than work your way back to figure out whom the victim was. So you first meet the murderer, followed by searching for clues, and conclude with the corpse. 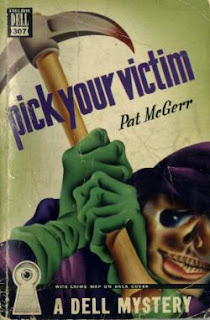 The story opens with a group of Marines, stationed in the Aleutians, whom are threatened to succumb to boredom and the monotony of daily routine, when one of them discovers that his package from the home front is padded with a heaping bundle of torn newspaper scraps. Needless to the say the scraps of paper are eagerly devoured, however, among the bits and pieces on boxing bouts and advertisements for women's garments is an incomplete account of a murder committed at the Society to Uplift Domestic Service (SUDS for short) back in Washington. Paul Stetson strangled one of the SUDS officers to death at their office, but parts of the article, that would've informed them on the victim's identity, are missing.
Well, this still being a detective story there's an incredible coincidence that one of them, Pete Robbins, just so happens to be an former employee of SUDS – and he can tell his comrades quite a lot about his time there. They set-up a pool and try to deduce the victim's identity based on the information provided by Robbins during an on-going flashback that covers several years and most of the book.
A drawn-out flashback, detailing office gossip and troubles, perhaps sounds a bit dull, but it wasn't tedious for even a single sentence, and there's much more beneath the surface than mere work floor rivalries – like serious attempts at usurping the society's presidential seat and nearly driving someone to commit suicide. Not to mention several violent outbursts that almost resulted in a couple of early murders.
I agree with the experts' opinion that the book truly offers a most singular problem, and not just for its original take on the detective story, but also for its fair play and brilliant simplicity – most brilliant ideas are brilliant because they're simple, and this is a textbook example of that.
In short: a one-of-a-kind masterpiece!
Geplaatst door TomCat on 2/19/2011