The Mystery of the Vanishing Magician (1956) by Bruce Campbell

"Bruce Campbell" is the penname of a husband-and-wife writing tandem, Sam and Beryl Epstein, who together produced the eighteen volume Ken Holt series, which has been rightly praised for its fine storytelling, logical plots and mature characterization – depicting two cub reporters on the brink of adulthood. More importantly, the series made a small, but not insignificant, contribution to the locked room and impossible crime story. 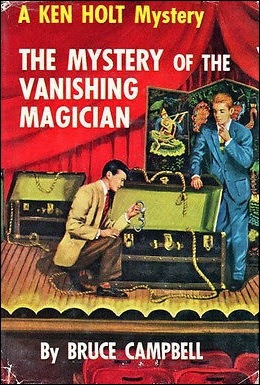 The Clue of the Phantom Car (1953) poses the conundrum of a speeding car that miraculously vanished from a dangerously narrow, hillside road and The Mystery of the Invisible Enemy (1959) concerns a highly secure and hermetically sealed laboratory leaking secretive information. Robert Adey overlooked these titles in Locked Room Murders (1991), but Brian Skupin corrected this oversight in Locked Room Murders: Supplement (2019). And added a third title!

The Mystery of the Vanishing Magician (1956) is the twelfth entry in the Ken Holt series, a young cub reporter, whose famous father, Richard Holt, "roamed the world as a foreign correspondent for the Global News Service" and therefore lives with the Allen family – who own the town's weekly newspaper, the Brentwood Advance. Ken works together with his best friend, Sandy Allen, as respectively a reporter and photographer on Pop Allen's newspaper staff. The opening chapter finds Ken and Sandy sitting in the audience of a charity show at the Brentwood High School auditorium, gathering material for the next edition of the Advance, when Sandy's older brother, Bert, recognizes Chris Bell in Magnus the Magician. A man who had once saved his life during a nearly deadly skiing holiday, in Vermont, but Chris Bell disappeared before they could properly thank him. And any attempt to trace him had been fruitless. Now he was standing in front of them, on stage, performing magic tricks!

During the big final, Magnus the Magician is going to perform "the old magical escape-and-transfer feat," magically transporting himself from one locked trunk to another, but he needs volunteers to inspect the trunks, handcuffs and to help shackling him. Bert is actually the one gets to cuff him and they see him saying something to magician, before he's lowered into one of the trunks. After three minutes have passed, the trunks are opened and they both turn out to be empty! But "he's not supposed to vanish!" However, this is not the impossibility of the story. That part comes later.

A backhand stage had seen Magnus coming out of the trunk and went away with the vague excuse that "he was unable to go on," but, as he made his getaway, he badly wrecked his car and is brought to the hospital in pretty bad shape. But things only go down hill from there. Police Chief or Brentwood, Alan Kane, identifies Chris Bell as Christopher Bell wanted in connection with a botched burglary and robbery of a jewelry store in Hilldale, Pennsylvania, where he had worked for nine years. Two men were nabbed by a cruising police car and they were so angry, because "the burglar alarm went off right after they entered the store," that they immediately identified Bell as their accomplice – whose only job was disabling the alarm and opening the safe door. Bell had already disappeared and with him "two hundred thousand dollars' worth of merchandise." And he has been on the run for four years!

It takes seven whole chapters of stalling and, yes, a little padding to finally get to the point of the story and the crux of the plot, but it was worth the wait, because the impossibility is an interesting one!

When they finally hear Bell's side of the story, they realize that "nobody else could have taken the stuff" except him, but the impossibility here is not represented by the double-locked door with an automatically-activated alarm system. The impossibility here comes in the form of a narrow window of time in which either Bell got clean away with the loot or one of his colleagues, James Turney, found a way to get merchandise out of the store. I know the premise sounds a little loose for a locked room mystery, but this is the genuine article with a well done false solution, accusing a least-likely-suspect with "a watertight alibi," based on classic locked room misdirection. I liked it that my initial, very Chestertonian, solution was mentioned in passing ("Or maybe you think he spread it out in the show window, where of course nobody could see it") right before the real trick was revealed. A wonderfully simplistic and logical explanation that was fairly clued and alluded to.

Unfortunately, the original locked room premise and its clever explanation also betrayed that The Mystery of the Vanishing Magician reads like an expended short story, because the whole plot hinges on the locked room-trick, but luckily, the Epsteins knew how to write – which is why I didn't notice it until well towards the end. But looking back on it, the plot is a bit of a patchwork.

The first seven chapters form a human interest story, ripped from the headlines, when Bert spots the man who saved his life, but inadvertently drove him into "a crack-up, and if he lives, he'll go to jail." So the Allens and Ken decide to help Bell prove his innocence. The detective work is done in the middle portion with Ken's two solutions as the highlight and the final quarter of the story moves into thriller territory.

A common trope in these junior detective novels is the obligatory spot of danger, or tight corner, in which the young heroes finds themselves trapped or tied up in an empty room or dark basement of an abandoned building. But these moments tend to be of a much more serious nature in this series with the Grim Reaper breathing down Ken and Sandy's neck. The Mystery of the Vanishing Magician could very well describe their most harrowing experience when they find themselves at the mercy of several crooks, inside a disused mine, who play a cat-and-mouse with each other full of bluffs and double-crosses. So its not just played for cheap thrills and shows how much the authors respected the intelligence of their teenage readers.

So, plot-wise, The Mystery of the Vanishing Magician is not quite as good, or intricate, as the previous two Ken Holt novels I've read, but the excellent storytelling masked those shortcomings and liked what it did with the locked room problem. Yeah, a relatively minor mystery novel, but a good example of the surprisingly original, often high quality, detective/impossible crime fiction hidden away in the often overlooked juvenile corner of the genre.
Lastly, I especially recommend the Bruce Campbell locked room trio, The Clue of the Phantom Car, The Mystery of the Vanishing Magician and The Mystery of the Invisible Enemy, to every impossible crime aficionado as a fascinating contribution to the genre from the 1950s.
Geplaatst door TomCat on 10/07/2020