Adam Gordon Macleod is one of those thoroughly forgotten mystery novelists, who's so obscure that the Golden Age of Detection Wiki doesn't even list his name, but five minutes of playing internet detective revealed that he was an engineer and a World War I veteran – who passed away in 1945 aged 62 (dates check out). During the 1920s and '30s, Macleod signed his name to (at least) four detective novel and one of them is listed in Robert Adey's Locked Room Murders (1991). You're surprised, I know. 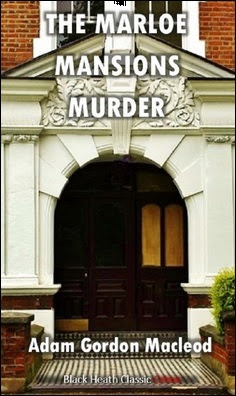 The Marloe Mansions Murder (1928) was reprinted as a two-part serial in the March 14 and 21, 1936, issues of The Thriller under the titles "The Marloe Mansion Murder" and "The Murderer of Mr. Slyne." And that was the last time the story appeared in print until Black Heath reissued it as an ebook in 2017. Nearly 90 years later!

The Marloe Mansions Murder seems to be the first novel starring Sir William Burrill, late of the Yard, who was the younger son of a younger son with far-off expectations of an inheritance, but unexpectedly succeeded to baronetcy. So he retired holding the rank Detective Superintendent and retreated to the family seat, Scawdel Hall, where he dedicates his time to fishing, shooting, stamp collection, writing a standard work on criminology and maintaining "a full-bodied beard," which had been "born and nursed to maturity during the long watches of 1914-1918" – while mine-sweeping in the North Sea. Sir William is accompanied in The Marloe Mansions Murders by his fair, blue eyed and clean shaven nephew, Robert "Bobby" Burrill, who wears a patch over his right eye. A souvenir from "a very gallant performance some years ago by one Temporary Second-Lieutenant R. Burrill." The ghosts of the First World War lurk in the dark and shadowy corners of the story.

Sir Burrill enters the story not as a detective, but as a stamp collector who goes to Marloe Mansions, London, to see Ganthony Slyne (a villainous name, if there ever was one) on some rare postage stamps. But when they arrive, the elevator door opened to reveal the huddled and bloodied remains of Slyne!

They immediately notify Scotland Yard and Inspector Ellershaw is dispatched to Marloe Mansions, but when they go to investigate the victim's apartment, plunged in darkness, Ellershaw "vanished as completely as if the earth had opened and swallowed him." The hall door had been locked behind them and all the windows were securely fastened on the inside, which makes his disappearance next to impossible without him being hidden somewhere. Ellershaw is nowhere to be found... until his body turns up in an unlikely place somewhere else in the building. 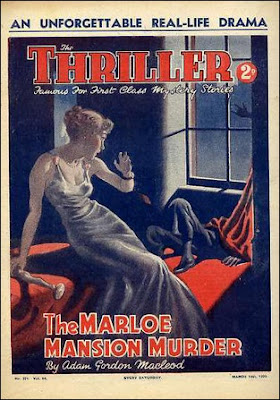 So the investigation, and style, of the story is split in two parts: Bobby is chasing the mystery woman of the story, Miss Sheelagh Vaile, who was seen leaving the building right after the body was discovered and Bobby is determined to clear her of every ounce of suspicion – which is easier said than done because Miss Vaile believes she killed Slyne. This is mostly done behind the backs of Sir William and Inspector Brett. Bobby's share of the story is, for the most part, a typical and mild thriller of the period with the only jarring note being Bobby threatening to torture information from a suspect using a red hot poker. You rarely come across such scenes in a traditional detective and, despite its thriller-ish trappings, The Marloe Mansions Murder is very much a traditional detective story.

Sir William stays behind with Inspector Brett to continue the investigation and he does some surprising scientific detective work. Such as determining whether a tiny hole in one of the window panes was drilled from the outside or the inside and there was a clever piece of trick photography, which felt a little out of place, or time, but special effects are almost as old as photography itself. So it feels out of place/time because it's not very often used in these vintage mysteries. A second point in favor of the plot is the locked room-trick, which is crude and clunky by Golden Age standards, but not as crude and clunky as a secret passage or "one of those fantastic doors of fiction" with hinged and movable frames. The locked room idea is much better than that and somewhat ahead of its time, because it would be another 70-80 years until two locked room artisans used this idea to its full potential.

I don't want to overpraise The Marloe Mansions Murder too much, because it's a very minor detective novel and, on a whole, the book is nothing more than an amusing curiosity, but it gives you the idea its better than it really is. The opening chapters braced the reader for a lurid, badly dated thriller with detective interruptions and half-expected, based on a bloody print of a mutilated hand, the murderer to be a disfigured WWI veteran who Slyne had hidden away from the world and it would place a line from the prologue ("Am I so repellent?") in a very different light – only it turned out to be a detective novel with a few thriller-ish interruptions. I don't think the eventual solution will blow anyone away and it's not particularly well clued, but those final lines were genuinely sad and tragic.

So, yeah, The Marloe Mansions Murder is an old-fashioned and uneven, but interesting, curiosity from the 1920s that is perhaps best read as a transitional mystery novel with some good and fresh ideas and two detective characters who stand out. But it was mostly handled and presented as a crude turn-of-the-century dime novel, which will never make it anymore than that. Nonetheless, I might still try one of his two 1930s novels, The Case of Matthew Crake (1932) and Death Stalked the Fells (1937).

A note for the curious: a plot linking a harmless hobby, like stamp collecting, to the horrors of the First World War is unusual, but it was done successfully in Harriette Ashbrook's A Most Immoral Murder (1935).
Geplaatst door TomCat on 10/27/2020