The Body Vanishes (1976) by Jacquemard-Sénécal

Yves Jacquemard and Jean-Michel Sénécal were French actors and playwrights who first met at the lycée (high school), where they formed a dramatic society, but they didn't start writing plays together until 1963 and collaborated on a handful of detective novels in the 1970s – published under the name "Jacquemard-Sénécal." A collaboration that only ended with Jacquemard's passing in 1980. 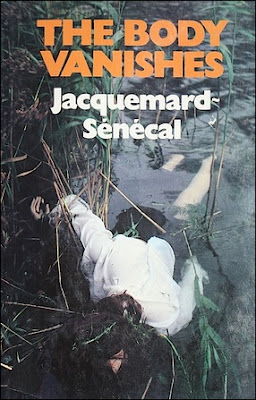 Two of their novels have been translated into English: Le crime de la maison Grün (translated as The Body Vanishes, 1976) and Le onziéme petit nègre (translated as The Eleventh Little Indian, 1977). The latter has been widely praised as "a loving homage" to Agatha Christie and "a good old-fashioned style detective novel," while the former accidentally wandered onto my locked room mystery wishlist. John Norris, of Pretty Sinister Books, got confused in his 2012 review and described the second murder as an impossible crime "that John Dickson Carr might have dreamed up." But it's not an impossible crime story.

I've not read The Eleventh Little Indian, but The Vanishing Body can also be described as a tribute to the Queen of the Crime with the clueing, red herrings and the main plot components obviously drawing inspiration from some of Christie most well-known and lesser-known mystery novels – disguised as a conversational, typically continental, roman policier (police novel). So the story reads more like Ngaio Marsh than Christie, but the plot and solution possess all the ingenuity of the latter.

The Body Vanishes takes place in Strasbourg, on the French-German border, where in the early hours of a Friday morning "a bundle of white rags" is discovered floating near the river bank. A closer look revealed the bundle to be the body of young, red-haired woman entangled in the tall reeds by the river's edge, but, when Superintendent Lancelot Dullac arrives, "the dead woman had disappeared." However, the people who had spotted the body recognized Dyana Pasquier in the red-haired corpse dressed in a tight-fitting white blouse and long black skirt.

Dyana Pasquier is engaged to the son from "a family one hundred percent Strasbourgeois," Denis Grün, who live together (in sin) on the second floor of the old Alsatian mansion belonging to his imposing father, Wotan Grün, and his much younger stepmother, Edwige. Wotan is a fine-art bookbinder and a seller of rare books in the original binding, which he had either restored or were entirely his own work, but in both cases they were considered objets d'art of great beauty – allowing him to maintain a large house and cultivate an artistic reputation. So when Dullac visits Wotan to ask when he last seen Dyana, they discover her body in Wotan's locked and burglarized workroom. A million francs worth of antiquarian books and quite a quantity of gold leaf were missing. 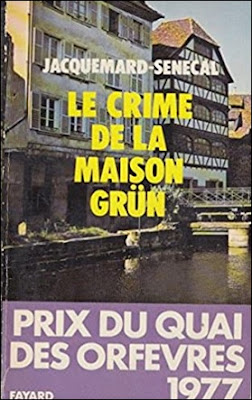 I can understand why The Body Vanishes could be mistaken as a locked room mystery, because the disappearing, and reappearing, body is presented as an impossibility. Dullac even hypothesizes that the body could have been brought in through the open, but shuttered, window by slipping "a knife-blade between the two panels and jerk the crossbar up." A trick that can be used in reverse to latch the shutters on the inside, but, as you'll eventually discover, The Body Vanishes is not a locked room mystery. It's a pure, Agatha Christie-style whodunit with a cleverly hidden motive and diabolical murderer.

But to get to the good parts, you have to sit through a lengthy series of interviews with all the suspects and witnesses. Something of a rut in every detective story that Brad, of Ah, Sweet Mystery, has affectionately dubbed "dragging the marsh" in honor of Ngaio Marsh. She usually divided her detective novels in two parts: a prelude to the murder followed by a series of interviews with all the suspects.

During these interviews, a solid 100 of 170 pages, Dullac talks with the Grün family that includes Wotan's independent minded daughter, Claire, who regular takes sides with her brother against their father – who complains to Dullac that "one's a red and the other's an anarchist." So there were regular verbal clashes at the Grün home, but Dullac also has to talk with the various members of a discussion group headed by Wotan. A group who had recently rebelled against him and lost. Another thing emerging from these talks is that Wotan has, or had, in his possession an ancient tome that holds the secret of how to transmute lead into gold! But the main point of this big chunk of conversations is to establish that all of the important characters have, what appears to be, unshakable alibis.

Towards the end of the middle, The Body Vanishes gets back on track with an attempted murder, some theorizing with a false solution and a second murder disguised as suicide, which culminates with Dullac gathering everyone at the Grün house. Where he seems to accuse people, left and right, until he reveals the fiendish plot behind the murder. An elaborate and fantastic solution full with sneaky alibis, secret alliances and a hidden motive, which strikes a jarringly false note with the dull middle portion that immediately preceded it.

I can see why Jacquemard-Sénécal decided to take this approach, because it has an artistic and challenging appeal to try and hide a fantastical, almost Grand Guignol-style, plot inside a humdrum police novel, but it has two drawbacks that will keep it from a classic status – one of them being the slow pace of the middle portion. It gives you the feeling that you're reading a book twice its length. The second drawback is that the ending seems a bit too much and contrived coming right after that middle portion. Just imagine being fed a scrumptious three-course gourmet meal after you've lived on dry crackers and water for months. Surely, it will be absolutely delicious, but perhaps also a bit too mighty in taste. That's how the ending impressed me.

Nevertheless, if you can take the Marsh-style procedure with the Christie-like plot, The Body Vanishes stands as an extremely clever and warm tribute to the most iconic mystery writer from the genre's Golden Age.
Geplaatst door TomCat on 10/14/2020