"We can't say for certain this is murder. Not at the present stage of the game."
- Superintendent Hadley (John Dickson Carr's Till Death Do Us Part, 1944)

Last year, I began to exhume the work of an incredibly prolific British pulp author, John Russell Fearn, whose legacy consists of an enormous pile of science-fiction, westerns and detective stories, which were published in various magazines under a number of different pennames – such as "Thornton Ayre," "Frank Russell" and "John Slate."

A good, sizable chunk of Fearn's detective stories are locked room mysteries and this should come as no surprise, because he was a self-admitted fanboy of John Dickson Carr. However, Fearn never really played in the same league as the great master himself and was very much a second-tier mystery writer, but he has become a personal favorite among the second stringers. One of his series, saturated with impossible crime material, managed to touch the ceiling that separated the second stringers from the top-tier writers. Only one of the books from that series seems to have managed to break through that ceiling (i.e. Thy Arm Alone, 1947). 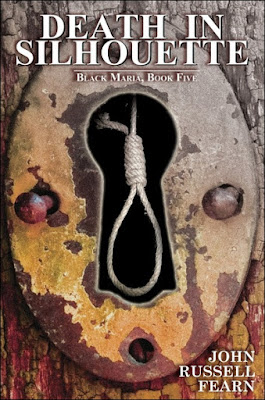 I'm talking about the Maria Black series, which sadly, covered only five books and commenced with Black Maria, M.A. (1944), in which the Principal of Roseway College for Young Ladies, Miss Maria Black, got an opportunity to put her knowledge as an amateur criminologist into practice by solving the murder of her own brother – who was shot to death inside his locked library. The book can best be described as what would have happened if Carr had written one of Stuart Palmer's Miss Hildegarde Withers mysteries.

It was an auspicious and promising start of a series that appears to have peaked with the previously mentioned Thy Arm Alone, but, luckily, there are still three titles left to enjoy. Well, now that I'm writing this review, there are actually only two left.

Death in Silhouette (1950) is the fifth and last entry in the Maria Black series, which has a weird whiff of realism lingering in its opening chapters. The story introduces the reader to a young working class couple, Patricia "Pat" Taylor and Keith Robinson, who respectively work modest jobs as a restaurant cashier and a costings clerk at the railway goods station, which does not allow for a lavish wedding or lifestyle, but they sealed engagement before the end of the first chapter – running off to their families to spread the happy news. Pat's parents could not be happier, but her brother, Gregory, was less enthusiastic with congratulating his sister and future brother-in-law. But the father of the groom-to-be was even less celebratory.

Ambrose Robinson is a religious fanatic, who spouts "yards of memorized scripture," but his objections fall on deaf ears. So he eventually finds himself attending an engagement party at the home of his future in-laws and one of the invitees is Pat's old head mistress, Miss Maria Black, but car troubles delayed her arrival and when she finally pulled up on the curb of the Taylor home "she felt an old-fire horse" which "has heard the bell" - as there was a police-car outside the house.
During the party, Keith went missing and he was not found until someone noticed the door to the cellar was not only locked, but it was locked from the inside. Nobody responded to the knocking. So the door was broken down and they Keith hanging from a rope tied to the staple in a beam that crossed the ceiling.

According to the evidence, Keith went down to the cellar, lock himself in, and then hanged himself. Right in "the middle of celebrating his engagement to Pat." 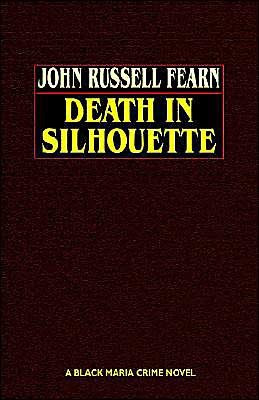 Maria Black's "singular gift of walking into tragedies" has not deserted her and, initially, does not want to get involved, but Pat wants to know what was behind her fiances sudden death. Naturally, this quickly turns into a full-fledged murder inquiry and one that has some interesting aspects. One part of the investigation concerns Keith's character and background. Keith had some jealously issues and was prone to mood swings, who could be "up in spirits one minute" and "down in the dumps the next," which is a mental complexion he might have inherited from his mother – who died in a rest-home were she was staying for mental problems.

However, the most intriguing part of the plot is the step-by-step reconstruction of what happened in the sealed cellar and how a potential murderer could have been involved.

Slowly, Miss Black gathered the pieces of the intricate jigsaw puzzle around the Taylor home, which consist of a shadow cast on a whitewashed wall, traces of candle grease and a torn cover from an American pulp magazine (Super Crime Stories). She also calls on her hardboiled legman/bodyguard from the States, "Pulp" Martin, who tasked with tracking down a lamp that was thrown in the trash, but also has to use his fist on a couple of occasions. I guess his presence is one of the reasons why this series always feels like reading an American-style mystery, but the role the pulp magazines played in the murder also helped and recalled some of Bill Pronzini's impossible crime stories (e.g. "The Pulp Connection" from Casefile, 1983).

So the plot of Death in Silhouette offers a genuine detective problem, but where the book really excels is the double-barreled solution that manage to co-exist simultaneously. One part of the solution is very clever and complex, which might not even have worked. Something that is fully acknowledged, but then the Merrivalean cussedness of all things general intervenes and throws an alternative explanation into the works. A solution that is simpler and far more elegant than the previous one, which may disappoint some readers, but it works.

How this solution can simultaneously exist is something you should discover for yourself, but the how of the crime gelled marvelously with the who. Fearn had me playing ring-around-the-rosies with the small pool of suspects and still missed the actual murderer. I came very close to the correct murderer, but not quite close enough.

So Death in Silhouette demonstrates why Fearn is becoming one of my favorite mystery writers among the second-stringers and why this particular series deserves to be better known among mystery readers. They're pure detective stories that are tremendously fun to read with plots that always try to give the reader its absolute best. I might pick off another one of Fearn's mysteries from the big pile before too long, but whether it's going to be another Maria Black novel or one of his locked room standalone is something I still have to decide on. So stay tuned!
Geplaatst door TomCat on 2/18/2017