"I doubt any men aboard could have foretold what lay ahead over those three-thousand miles of teeming sea."
- Marshall (Suspense, episode 232: Murder Aboard the Alphabet, 1947)

Late last month, I reviewed A Variety of Weapons (1943) by Rufus King and referred in that blog-posts to one of his most celebrated novels, Murder by Latitude (1930), which was praised in the comment-section by "D for Doom" and Curt Evans – whose respective reviews of the book can be read here and here. King wrote a triad of maritime mysteries, which also includes Murder on the Yacht (1932) and The Lesser Antilles Case (1934), but Murder by Latitude seems to be the centerpiece of this trilogy. 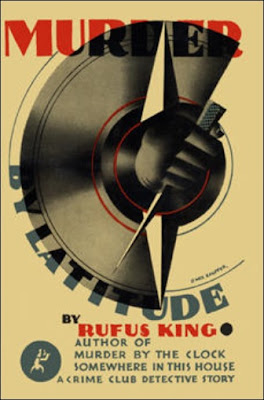 "D" called the book "one of the best examples of the shipboard mystery novel," while Evans went as far as placing it as "one of the major American works within the detective fiction genre from the period between the World Wars." However, I came away with a more tempered opinion on its overall merits. Murder by Latitude is a well-written, moody and atmospheric tale of crime, spattered with some original ideas, but it's not a classic among maritime detective stories.

So, I'm very sorry to be the proverbial wet blanket on everyone's enthusiasm for this novel, but my opinion simply did not align with pretty much everyone else who commented on it. Still, it was not a bad mystery and the plot definitely had some points of interest.

Murder by Latitude takes place aboard a small cargo ship, called SS Eastern Bay, which the Mercantile Transport Line had turned into "a cheap little passenger-carrying freighter" with the intention of building up a name in the passenger trade – which showed to be going well when glancing at the passenger list for their passage from Bermuda to Halifax. First of all, there's a fabulous wealthy woman, Mrs. Poole, who's accompanied by her fifth husband, Ted, and she turns out to be focal point of all the trouble aboard.

However, the rest of the cast consists of less distinguished characters: one pair of spinster sisters, the Misses Sidderby, with the elder sister making a gruesome discovery on deck. A middle-aged married couple, Mr. and Mrs. Sandford. A young, handsome man named Force and an ugly, forty-some bloke called Wright. A pasty-faced, middle-aged man named Mr. Stickney and a much younger, eccentric looking Mr. Dumarque. Finally, there's Lt. Valcour of the New York Police and his presence worries Captain Sohme, because the police-lieutenant is there on a mission.

Several weeks ago, two men were knifed in the washroom of a New York night club: one of them was deadly wounded, but the other man is recovering in the hospital and the police expects to get a full description of the assailant once the victim has regained consciousness – which does not mean the police has been twiddling their thumbs in the meantime. A letter that was found on the dead man suggests the murderer had a link to one of the passengers aboard and might be present among the small cast of characters. So once the victim in New York gives a description of his attacker "it will be wirelessed" to the lieutenant, but the murderer intervened in this plan.

The ship's wireless operator, Mr. Gans, is the only person aboard who knows how to operate the communication system and this makes him a prime target. Someone has "closed their fingers about his windpipe" and "kept them there until his lungs no longer functioned." 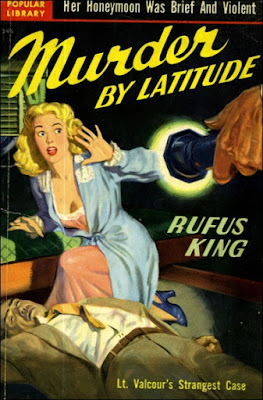 I want to take a moment here and point out a couple of nifty, stylistic touches to the overall story.

One of them is that each chapters begins with the latitude and longitude that shows the position of the ship at the moment the events in that specific chapter takes place. So, if you're a detective reader who's also into cartography and geography, you can probably have some fun with them. Secondly, there are the occasional cablegrams between Commissioner of the New York Police Department and several port authorities, which are curt and businesslike, but betray a slight panic that they're unable to establish contact with both the ship and Lt. Valcour – even frustration when the bad weather prevents a search from the air. It really benefited the moody, mournful atmosphere and that's the strong point of the book.

However, where King prevented Murder by Latitude from attaining a place among the classics of the genre was a lack of proper clues and showing the reader too much. Some would argue that a stolen pair of (sewing) scissors, a silver thimble and a lump of sailmaker's wax constitutes as clues, but the reader is shown that the murderer used these items to commit a second, semi-perfect murder. But they don't point in the direction of this person. There are, in fact, practically no clues that could help the reader identify the murderer. Well, there's one, however, you have to be an expert code cracker to get access to that clue.

In the aforementioned cablegrams, the Commissioner added a coded message for Valcour. A coded message that, when solved, gives you a short, but tell-tale, description of the murderer. So, technically, you can make a case that King played fair, but hardly enough to be considered a classic. I'm also kind of baffled how the murderer knew Valcour was expecting a wireless message from New York and had to kill the only wireless operator aboard to delay the inevitable. Or maybe I missed or misunderstood that part of the explanation.

So, plot-wise, Murder by Latitude suffers from almost the same faults as the previous shipboard mystery I reviewed, namely Elizabeth Gill's Crime de Luxe (1933), but they're both still very good and readable (crime) novels. But whereas Gill's effort was a bright, sophisticated novel of manners in the style of the British Crime Queens, King's novel is a somber, melancholic affair with a sustained atmosphere that makes for an excellent read.

Admittedly, the explanation is not without interest and can even be labeled original, which makes it a real pity that the solution did not adhere to the fair play standards of its time – because the result would have been a genuine classic of its kind.

Please, feel free to vehemently disagree with me in the comment-section, if you're one of the many mystery enthusiasts who had more than a lukewarm response to the book.
Geplaatst door TomCat on 2/06/2017