"You have chosen, mademoiselle, the dangerous course... As we here in this boat have embarked on a journey, so you too have embarked on your own private journey – a journey on a swift moving river, between dangerous rocks, and heading for who knows what currents of disaster..."
- Hercule Poirot (Agatha Christie's Death on the Nile, 1937)

As a personal, unwritten rule, I always try to avoid posting back-to-back reviews of the same author, but I was compelled to make a rare exception for the subject of my previous blog-post, Elizabeth Gill.

Gill was a woman who died at the early age of 32, following complications from surgery, which tragically cut her career as a mystery novelist short. She only finished three detective novels during her short live time. All three of them were helmed by her series-character, Benvenuto Brown, who's a painter with an interest in criminology and, as a layman in that field, he successfully applied his knowledge of crime and human nature – acquiring a reputation as an amateur meddler in the process. A reputation that begins to precede him when he first appeared on the grand stage in The Crime Coast (1931). 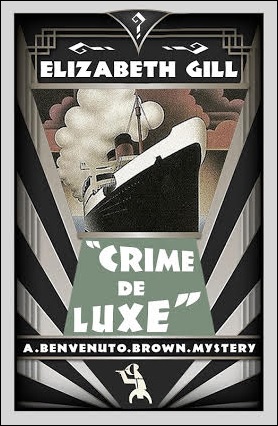 There are two reasons why I broke my no back-to-back reviews rule: one of them is that Gill's debut looked promising and the fact that her last one was a maritime mystery with a luxurious ocean-liner as its setting. I love seafaring vessels as a backdrop for a good detective story!

Crime de Luxe (1933) was the last of three novels about Benvenuto Brown and takes place aboard a transatlantic ocean-liner bound for New York, which Curt Evans, who penned the introduction for these new editions, called the book one of his favorite shipboard mysteries. So my interest was sufficiently piqued to make an exception and immediately removed it from the big pile. But enough of this palaver...

Brown boards a luxury ocean-liner, called the Atalanta, on his way "to New York to be present at his first exhibition in America," but the crossing is a five-day voyage and the painter is determined to fully enjoy those days – devoting him to nothing more than such leisure activity as wandering around the deck and reading magazines. However, he also has a hobby closely related to both his profession as a painter and his hobby as an amateur reasoner of some celebrity: observing people and imagine their back-story. It's a game he has played in the cafés of Paris, Vienna, Berlin and the sea-ports of the South.

Well, the passenger list of the Atalanta can be considered a buffet for "his painter's eye and his restless imagination."

There are Samuel and Margaret Pindlebury, an elderly couple from England, who quickly become ship-deck friends of the painter and he prefers to socialize with them, but this does not prevent Brown from suspecting one of them of having blood on their hands – resulting in a rather pleasing false solution in the Berkeley-Queen mold. Brown's artistic eye also captures the figure of Ann Stewart, a young widow, who remained, somewhat, incomprehensible to the artist, but the tragedies ahead would "incidentally entail making the further acquaintance" with her. Lord Stoke, "the newest ornament to the British peerage," is making the crossing with his wife, Lady Stoke, who has "one boy friend on board," Rutland King, known as "the greatest lover on the screen," but she keeps her husband in the dark about their friendship. Lord Stoke also seems to be on odds with two other passengers about a revolutionary new fertilizer: one of them is a zealous communist, named Roger Morton-Blount, while the other, Leonard Gowling, has a personal dislike for Lord Stoke.

But the most intriguing character (IMO) was the short-lived, old-fashioned presence of "the fusty black figure of Miss Smith."

Brown described Miss Smith as "a figure of darkness." A woman who could be either forty or sixty, clad in black, antiquated clothes, with black, frizzy hair streaked with gray, but the pitiful, thin-lipped droop on her pale face made her a tragic rather than a sinister figure – one who inspired pity. She only spoke to Brown during her short stay aboard the ship. A painful fact when an unknown person hurls her into the cold, dark waters of the ocean and Brown has to paw through her suitcase for answers, which showed she lives for the better part of two decades "in some obscure backwater of life." A sordid, isolated existence bare of any real luxury or comfort. 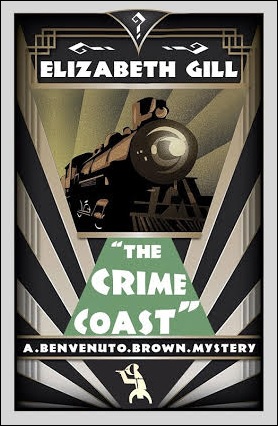 However, the contents of the suitcase also indicates Miss Smith was able to escape from her confines and began "an exciting pilgrimage into the world," but one of her fellow passengers "cheated her of her brave new world." So that made for an interesting, half-finished character portrait of a drab woman and the other half of her story was somewhere on the ship. But here's also where the sole problem of the book rears its ugly head.

Crime de Luxe is sparsely equipped with genuine (physical) clues. There's the content of Miss Smith's suitcase and a smattering of threatening letters that hint at a blackmail angle, but, by and large, this is a character-driven novel of manners. A novel that hinges on the personalities and convictions of the characters as well as providing the reader with a window into the world of the early 1930s, which is definitely interesting for anyone with an interest in history. One of them is the clash between proponents of Capitalism and Communism. A theme that is very prevalent in the overall story, but also found Brown's trip to the ship's gymnasium interesting, because the place, "bristling with every modern contrivance," easily impressed modern readers as a bit science-fiction – since you don't associate the 1930s with "an electric back-slapper" with "brisk mechanical fingers" that gave back massages.

So, I can see how the book could end up on someone's personal list of favorites, but, as a shipboard mystery, it's not in the same league as Agatha Christie's Death on the Nile (1937) and Carter Dickson's Nine-and Death Makes Ten (1940). As a matter of fact, I think Crime de Luxe can best be described as a sophisticated crime novel rather than as a pure detective story, because I'm still not entirely sure how Brown reached his conclusions. He admitted it involved a lot of luck, chance, some bluff and a last-minute telegram from the police, but how this definitively pointed out the murderer remains a bit vague. Let's just say that the path of logic, that lead to the solution, was a bit overgrown in this instance.

So, all in all, I would say Crime de Luxe was a better written and characterized novel than her maiden effort, but The Crime Coast was a superior detective story. I wish this review was a positive as the previous one, but Crime de Luxe simply was not as strong as a (pure) detective story as I had hoped. Still a good and readable crime novel (particularly if you like maritime fiction), but, based on her debut, not what I expected and hoped for.

On a final note, I have several blog-posts focusing on some equally obscure shipboard mysteries, which you might be interested in: W. Shepard Pleasants' The Stingaree Murders (1932), Robin Forsythe's The Pleasure Cruise Mystery (1933), P. Walker Taylor's Murder in the Suez Canal (1937), Frances & Richard Lockridge's Voyage into Violence (1956), Herbert Brean's Traces of Merrilee (1966), K.K. Beck's Death in a Deck Chair (1984), Max Allan Collins' The Titanic Murders (1999) and The Lusitania Murders (2002).
Geplaatst door TomCat on 2/04/2017