"There should be no combination of events for which the wit of man cannot conceive an explanation."
- Sherlock Holmes (Valley of Fear, 1915)

Herbert Brean was an American journalist and a "Perennial Sherlockian," who switched from reading detective stories to writing them and Wilders Walks Away (1948) is his most cited and popular work to date. Personally, I prefer Hardly a Man Is Now Alive (1952), mandatory reading for John Dickson Carr enthusiasts, and The Traces of Brillhart (1961), in which a magazine writer, William Deacon, investigates the alleged immortality of a New York music composer. 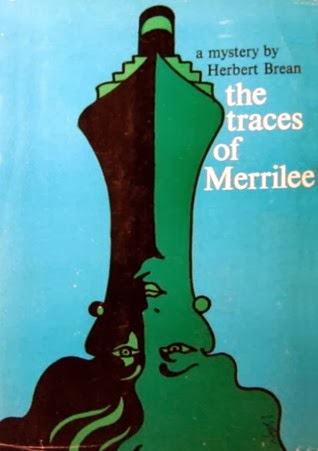 The Traces of Merrilee (1966) marked the second, and final, appearance of Bill Deacon and meddling in police business paid off at the start of this book – as a banking friend hires him to take passage aboard the Montmartre to protect a multimillion dollar investment. Loans were given to fund a big-budget movie, based on Helen of Troy, but a successful return on their investment depends on Merrilee Moore and she disappeared for the time being. There was a solemn promise from the actress to be aboard, but gave an impression of being scared and fearful of the crossing.

Interestingly, there are snippets of impossible crime material present here! Merrilee believes she inherited the gift of Extra-Sensory Perception (ESP) from her mother, who developed the power touring dingy theatres and joints with a mind reading act. The solution to the trick was revealed in a throwaway line, inside a brief back-story, but it's actually pretty clever and could generate year's worth of discussions on its fairness – if properly and prominently used in a detective story. Merrilee's mother predicted she would die at sea (how lovely) and has a recurring nightmare herself about man with a green face hanging by the throat in a closet.

This makes The Traces of Merrilee a borderline impossible crime novel, but the elements are too weak and superficial to, officially, qualify the book as such. This is, however, not to the detriment of Brean as a mystery writer, because they weren't the main focus of the plot and Brean learned from Wilders Walks Away a full-blown locked room mystery wasn't one of his strong suits – hence why I prefer the titles mentioned in the opening of the post.

Back to the story. The recurring nightmare about the green-faced man, hanging from a hook inside a closet, becomes prophetic, however, Deacon simply disposes of the body by dumping it one of the lifeboats. A popular spot for a body dump on an Atlantic cruise, because the murderer picked another lifeboat to discard of the second victim. Unfortunately, the dying words of the victim never translated into Ellerian dying message. The detections of Deacon further consists of tailing a notorious industrial spy, which becomes complicated when there are two men sharing the same name on the ship, slipping in and out of cabins (or being locked up in them) and avoiding being maimed – before confronting the killer during a staged visitation from beyond the grave.

Not very original as far dénouements go, but that's emblematic for The Traces of Merrilee. Brean penned a breezy, fast-paced and fairly clued detective that was fun to read, but, except for the mind-reading act, nothing stood out as particular clever or inspired. Merrilee and Deacon were pretty much the only characters in the book and everyone else simply played their part. I'd place the book closer to (TV lightweights) Murder, She Wrote and Midsomer Murders (fun but unchallenging) than to the Golden Age ancestors Brean penned earlier in his career.

Recommend to fans of Brean and shipboard-set mysteries, but, if you're new to this author, I recommend you begin with Hardly a Man Is Now Alive, The Clock Strikes Thirteen (1954) and The Traces of Brillhart.
Geplaatst door TomCat on 2/24/2014