The comprehensive scope of Tipping My Fedora encompasses "mystery, crime and suspense in all media" and Sergio, in charge of the outfit, is currently in the process of reviewing the entire 87th Precinct-series by "Ed McBain" – a penname wielded by the late Evan Hunter. Sergio did his part in putting Killer's Wedge (1959) and Tricks (1987) in my hands, and they didn't disappoint, in addition to tossing another burden on my wish list. Thanks a lot, chum! 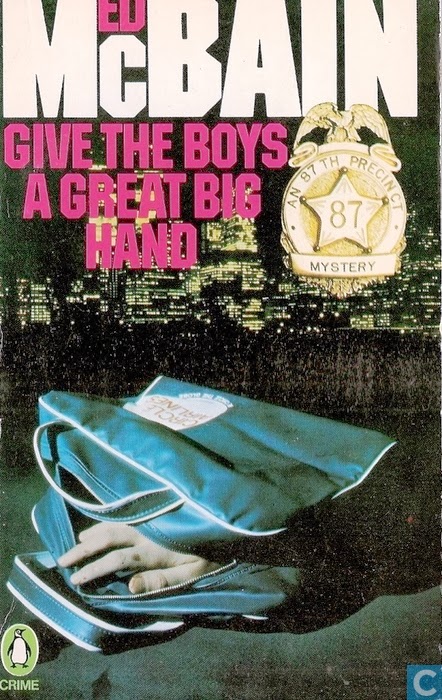 Give the Boys a Great Big Hand (1960) was the eleventh to appear in the row of 87th Precinct books, covering six decades, but the first to be published in a period no longer dominated by the bright light of the Golden Age. The moody, somber backdrop of a drenched city and the nature of the plot seem to (unwittingly) reflect the passing of the old order into a new and uncertain era.

First of the character vignettes in the novel is of a patrolman, Dick Genero, sloughing through his beat in the pouring rain on a dreary afternoon in March. Genero muses on the sordid business that comes with being a policeman and bums a drink from Max the Tailor, but the day takes a turn for the worse when he sees a passenger boarding a bus without his or her bag. It's a small, common looking bag from an airline with exception of its content: a large hand severed above the wrist with mutilated fingertips.

Genero takes the bag post-haste to the precinct and interrupts the boys reminiscing about their days in uniform, but, curiously enough, Genero only receives flack for not attempting to board to bus at the next stop. I'm sure removing that bag from the scene wasn't standard police procedure. Even if its rains. Anyhow, an examination reveals the hand belonged to a white male in his early-teens to mid-twenties... probably.

There's not much to work with for Steve Carella and his men except to comb through the list of missing persons and the structure of the story, strangely, reminded me of an episode of CSI (*). Forensics comes from examining the severed hands (other one was found in a trash can) and analyzing blood spatters-and types. Detectives are fleshed out in brief character sketches detailing past experiences or personal reflections, without dominating the entire story, while they "meet people on the worst day of their lives," but despite that there's still humor to be found in McBain's dark and gritty world. The conclusion is inevitably tragic and I'm sure something similar was done on CSI, because it would fit the show. Or, perhaps, 87th Precinct-series would be perfect for television adaptation. I think these stories would translate very well to the small screen.

Anyhow, I'm not very good in reviewing these character-driven crime stories, plots are my department, but I liked Give the Boys a Great Big Hand for its engrossing, semi-hardboiled story telling, slow unwinding plot and the picture of the city being drowned by a seemingly unending cloudburst. Shortly put, McBain could write and I'll be back for more.

*) I had a CSI-period, but, in my defense, Max Allan Collins duplicitously lured me to the franchise when someone recommended his TV tie-in novels of the series. Unfortunately, all three TV-series managed to lose my attention when the characterization began to resemble a parody of a daytime soap opera.

Note before posting: I read back this post and it's really a poor review. Sergio does the book more justice and I recommend you read his review(s), if you want to be really convinced to give this series a shot.
Geplaatst door TomCat on 2/23/2014