"Espionage, my son, is far from being a joke in these days. It's wide and it’s deep and it sinks under your feet—like that water out there. It runs much deeper than it ever did twenty-five years ago."
- Sir Henry Merrivale (Carter Dickson's Nine-and Death Makes Ten a.k.a. Murder in the Submarine Zone, 1940)

The Lusitania Murders (2002) is the fourth entry in Max Allan Collins' remarkable, but sadly discontinued, "Disaster Series" that "combined the factual with the fanciful" by hurling celebrated writers of popular fiction in disastrous, world-altering events and have them solve a range of problems – just before tragedy strikes! 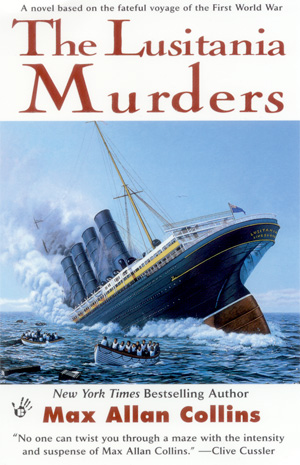 Jacques Futrelle was the spiritual father of one of the immortal detectives of the printed page, "The Thinking Machine," who perished on the R.M.S. Titanic in 1912, but The Titanic Murders (1999) gave him a proper sendoff. The Pearl Harbor Murders (2001) gave Edgar Rice Burroughs of Tarzan fame a murder to investigate on the island of Hawaii mere days before the devastating attack that pulled the United States into World War II. The London Blitz Murders (2004) pits Agatha Christie against a depraved serial-killer, known as the "The Blackout Ripper," when the city was being pounded by the Luftwaffe, but The War of the Worlds Murder (2005) remains my personal favorite – in which Walter B. Gibson comes to the rescue of Orson Welles during the infamous Panic Broadcast.

Willard Huntington Wright was a "trailblazing art critic" and an important avant-garde figure in pre-World War I New York City. Wright was a "caustic critic of popular fiction," but would gain everlasting fame in that realm of the literary world as the man who brought the British-style, puzzle-oriented mystery novel to the Americas and created one of the most irritating, know-it-all snobs in the genre – the wisenheimer known as Philo Vance.

However, that chapter of his career began in the mid-1920s with the publication of The Benson Murder Case (1926), but The Lusitania Murder is set during the first week of May, 1915, when the titular ship left New York for Liverpool, England on what would be her final voyage. During those days, Wright was still somewhat of an acid-tongued critic and a professional journalist.

Collins exercised his artistic license to place Wright aboard the Lusitania, under the guise of a reporter seeking interviews with some of the famous guests, which is an operation done under the familiar pseudonym of "S.S. van Dine." However, there's an ulterior motive for his presence aboard.

The Lusitania was a luxury liner that could be easily converted into a battleship and there are persistent rumors that, in its capacity as a passenger liner, the ship is used to transport "ammunition, weapons and perhaps even high explosives" into a war zone – effectively blurring the lines "between commerce and combat." It makes "Big Lucy" a potential target for U-boats and saboteurs. So, as "S.S. van Dine," Wright has to gauge the veracity of those rumors for an article, but he also has a slight personal interest in the matter as a public germanophile with a pro-German stance. 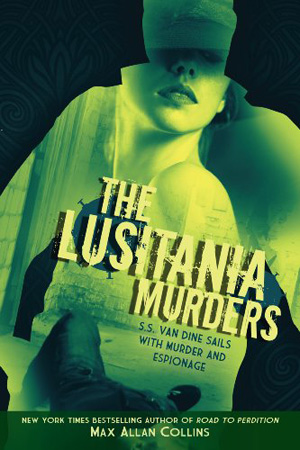 In reality, Wright was blacklisted from journalism for his German sympathies, which happened after the United States declared war on Germany in 1917. There were also accusations of Wright being a spy for Germany. The picture Collins painted of him had a bit more nuance, which stated that although his "tastes run to Wagner, Goethe and Schopenhauer" it shouldn't be assumed he wears "a photo of the Kaiser in a locket" near his heart – which nudged him slightly into the neutral corner.

Anyhow, there's not just a possible secret, unlisted cargo of war supplies that requires Wright's attention, but there's also a small group of German stowaways found after departing from New York. Are they spies, saboteurs or merely part of a ring of thieves targeting the valuables of the first-class passengers? Whatever the answer is, someone wants to them out of the way and soon they're being targeted by a brutal, devious murderer.

Luckily, Wright receives help from the ship's detective, Philomina Vance, who's a Pinkerton operative with the deductive-skill of storybook detective and plays the Sabina Carpenter to Wright's John Quincannon. It's up to them to figure out whether the murders are connected to the possible war-connection the ship has with the Allied war effort or to the mysterious telegrams that some of the more prominent passengers received before departure. Or simply a fallout among thieves.

Collins used some of the actual passengers for this part of the plot, because they included a who's-who of the rich and famous from the early 1900s. They include multi-millionaire Alfred Vanderbilt. Philosopher and writer Elbert Hubbard. A well-known American theatrical producer with German-Jewish roots named Charles Frohman. The Belgian fund-raiser Marie DePage. Which are just a few of the notable names.

This makes The Lusitania Murders a well-written and researched novel, which pleasantly blurred the lines between fact and fiction without becoming too implausible. It must be, however, noted that this entry paid more attention to the characters and the ambient setting that other books in the series, which may have something to do with the time-period in which the story was written – as it was written in the aftermath of the terrorist-attacks on September 11, 2001. Collins mentioned in his after word that "for a number of days" he "did not feel like playing the role of entertaining," which was particular troubling to "a writer in the process of creating a confection based around another tragedy of war."

So this probably gave characters, setting and the looming disaster a bit of a precedent over an Agatha Christie-style drawing room mystery. More than is usual in this series. However, that doesn't mean the story is bare of clues or a decent plot, which it has, and I feel confident in stating that both readers of detective-and historical fiction will find enough between the pages of The Lusitania Murders to loose the track of time for a couple of hours.

Finally, I want to point out that the foreword imagines Van Dine would titled this book The Lusitania Murder Case, which is an appealing title, but he preferred a six-letter word preceding the murder case-bit. I know he wrote The Gracie Allen Murder Case (1938), but that was an exception (and a bit of a sell-out). I think something along the lines of The Cunard Murder Case or The Kaiser Murder Case would've been closer to a Van Dine approved title for this book.

I guess this is as good to end yet another long, rambling and shabbily written review and urge you to read this series for yourself. I'd recommend The War of the Worlds Murder in particular, which is simply wonderful. And has Orson Welles as one of the main characters!
Geplaatst door TomCat on 11/20/2015