There's a Reason for Everything

"People kill other people... for all sorts of reasons that don't seem to make sense to anyone else."
- Chief Inspector Jonathan Boyce (Francis Duncan's In at the Death, 1952)

Over the past three months, I've been working my way through a small stack of detective novels by Francis Duncan, which were reprinted last year by Vintage and counts now five of (reportedly) nine titles from the author's series about a retired tobacconist, Mordecai Tremaine – who's also an amateur criminologist and professional murder-magnet.

Regardless of his attraction to violent crimes, Tremaine is a hopeless romanticist and a "sworn friend of lovers." A sentimental soul whose "chief delights" is reading the bright, "refreshingly idealistic fiction"  published in Romantic Stories and this colors his role as detective. So you can basically sum him up as a literary relative of Agatha Christie's Harley Quin and Mr. Satterthwaite (who are also described as friends of lovers). Simply a delightful and sympathetic character, but one who, somehow, got tossed on the trash heap of obscurity and waned there until 2015 – when the previously mentioned published reissued Murder for Christmas (1949). A success that lead them to reissue four additional titles in 2016. 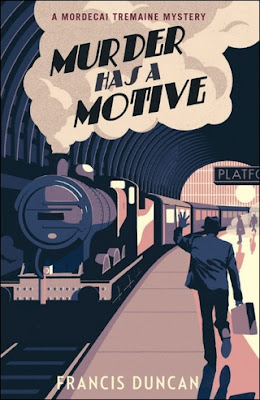 I mentioned in my previous reviews how Duncan evidently knew how to put a plot together, but he also had an eye for the backdrop of his stories and this is illustrated in the bright, eye-catching covers of the new editions. Three of the four recent reprints were all set near the sea: an isolated house on the cliffs (So Pretty a Problem, 1950), a seaport town (In at the Death, 1952) and a sun-soaked island (Behold a Fair Woman, 1954), but one of the earliest books in the series has a far more traditional setting – a quintessential village in the English countryside.

The backdrop of the book is a small, snug and seemingly idyllic village, named Dalmering, but there's a dark, disturbing undercurrent beneath the surface of ordinary, everyday village life. A "shadow of evil lay heavily over the loveliness of Dalmering." The idea and aesthetics of the treacherous tranquility of village life has been run into the ground on the Midsomer Murders, but when Duncan tackled the subject it was still fresh enough. And he even had a somewhat original take on it.

Dalmering's population is divided into two camps: one of them consist of the permanent, long-time residents ("the older Dalmering, the true Dalmering") who've lived there for many generations, while the second camp, known as the "Colony," are only temporary residents of the place from London – who had discovered "its unspoilt beauty." Tremaine travels down to Dalmering to spend a holiday with two old friends, Paul and Jean Russell, who run a busy country practice and invest a great deal in the social life of the village, but tragedy has struck the place on the eve of his arrival. A member of their community has become the victim of a "dark, brutal murder."

Lydia Dare moved around in the circle of the Londoners and was engaged to Gerald Farrant, but, on the evening of her death, she had dinner with Martin Vaughan. A self-made man with archaeology as his hobby and it was known he was in love with Dare, which gave one of the strongest motives when she was murdered on her way back to home. She was found stabbed to death in the early hours of the morning on a well-worn pathway through a small copse.

As said before, Tremaine sympathies were "on the side of romance" and the fact that the victim was about to be married "weighed with him the most." To strike at the young and happy was "to arouse him to wrath" and awakened "the smouldering, deep-seated chivalry of the Galahad who dwelt within him," but the case is far more complicated than it first seems. For one thing, his friends and hosts received a small, but useful, legacy as a result of Dare's death. Giving them a ghost of a motive. However, there are also the intertwined, often hidden relationships and potential motives of the other villagers, which all seem to be connected to the local amateur dramatics society. They're rehearsing for an interesting stage play in three acts, Murder Has a Motive by Alexis Kent. 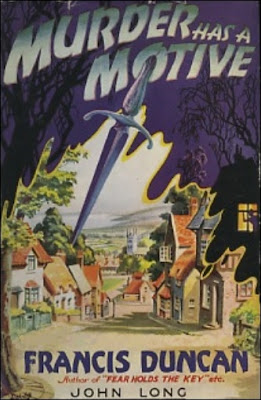 Well, from here on out, it becomes difficult to discuss the plot in close detail, because Murder Has a Motive is Duncan's most descriptive and character-driven mystery novels to date, which also has some very nebulous clueing. There are some physical clues, such as a pair of "roomy, wooden-soled Somerset clogs," but the solution is reasoned from what certain characters knew, did or must have done. So, technically, the reader has a shot at solving the crimes, however, this is not an easy task since the murderer is batshit crazy, which makes the book-title a bit ironic.

All of that being said, the book still worked as a detective story, albeit more along the lines of Ellery Queen's Cat of Many Tails (1949), which also gave a glimmer of the real-life effects a homicidal maniac can have on a community.

The killer from Duncan's tale committed three murders (last one was particular gruesome) and this placed the village in "the blinding glare of frightening publicity," which begins to worry the police after the second and third murder – because the press-hounds will be showering the investigators with scorn, accusations and bitter criticism. You also get a taste of the vivid newspaper prose from some of Fleet Street's most colorful writers after the second body is found. So, in that regard, the story really gave you the feeling that a large, outside world had cast its eyes on this small, secluded place when the murders started to happen.

I also want to point out the opening of the third chapter, in which Tremaine and Inspector Boyce bump into each other near the scene of the crime. Boyce immediately hurls an accusation at his old friend that, "whenever anyone gets killed," he discovers the body or is nearby. And how he should be called "the murder magnet." Tremaine defends himself by pointing out that the murder was all over when he arrived, but it's interesting to see how this series used that exact term. Other GAD-period writers have pointed out how their characters attracted murders wherever they went, but Duncan actually used the term "murder magnet." It's something worth pointing out.

Well, I wish this review had a bit more substance to it, but, suffice to say, Murder Has a Motive is an unconventional village mystery and a fairly solid entry in a wonderful series of detective novels. A genuine rediscovery worthy of our current Renaissance Era. I sincerely hope Vintage decides to complete this series by reissuing the remaining titles. Here's hoping!
Geplaatst door TomCat on 2/23/2017