The Mills of God Grind Slowly...

William Underhill was the man behind the nom de guerre of "Francis Duncan," a pen name he used for twenty-some, long-forgotten detective novels, published between the late 1930s and early 50s, but his work garnered renewed interest when a major publisher reissued Murder for Christmas (1949) in 2015 – followed a year later by four additional titles. I reviewed two of them, So Pretty a Problem (1950) and In at the Death (1952), which showed how undeserved his decades-long spell in obscurity was. A talented novelist who knew how to construct intricate and clever plots! 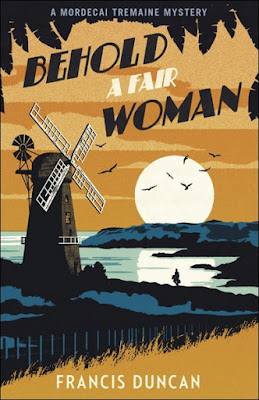 So, I decided to snatch up the remaining two titles that were released last year. Both of them star Duncan's warmhearted series-detective, Mordecai Tremaine.

The titles in question, Murder Has a Motive (1947) and Behold a Fair Woman (1954), were commented on by John Norris, from Pretty Sinister Books, in the comments of my review of So Pretty a Problem – which proved to be very helpful in picking between the two. According to Norris, the former "leans heavily on shock factor with a high body count" and "a truly bizarre motivation for all the deaths," while the latter was described as "the best of the lot" with complex plot and "a somewhat tragic climax." Obviously, I went for the reportedly best one of the lot.

Behold a Fair Woman brings the retired tobacconist and hobby detective, Mordecai Tremaine, to the picturesque, sun-drenched island of Moulin d'Or to spend a fortnight with friends, Mark and Janet Belmore. The idea, or hope, is to escape from his detective's curse that always brings a body or two on his path and the island seems to be an ideal place for such a purpose.

Moulin d'Or appears to be a harbor of tranquility with a modest tourism industry and most of the money is made by growing tomatoes in green houses, which form "a sea of glass" on the landscape, where the only serious crime took place a hundred years ago – when a wealthy, gold hoarding miller had his throat cut. The sole reminder of this unsolved murder is an old, dilapidated mill reputedly haunted by the murdered miller. Unfortunately, this brief back-story about the ruined windmill only dabbed some local color on the canvas of the overall plot.

Anyhow, upon his arrival, Tremaine encounters a host of characters who are either living on the island or spending their holiday there.

As a passionate reader of Romantic Stories, Tremaine approves of "a cheerful, pleasant little crowd" consisting of four young people having fun on the beach, but soon notices undercurrents between Geoffrey Bendall, Nicola Paston, Ivan Holt and Ruth Latinam. Tremaine is also introduced to a married couple, Alan and Valerie Creed, who have become semi-permanent residents of the island, but why did he feel like having met Valerie before? He also makes acquaintance with Major Ayres and Mrs. Burres, resident guests at the Rohane Hotel, which is run by Ruth's brother, Hedley Latinam, but he seems to have given his most loyal customers a notice – as they'll be out of the place by the end of the month. Finally, Tremaine struck up a friendship with a local tomato grower, Ralph Exenley, who shares his interest in amateur criminology ("Tomatoes and crime! They make an odd pair"). 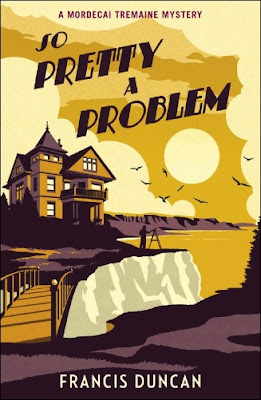 Well, these character-introductions, conversations and basic setup of the plot gobbles up the first half of the book. A portion that also consists of Tremaine exploring the island and finding crumbs of food in the deserted windmill, seeing lights out at sea and accidentally overhearing a conversation. He was on holiday "to forget that such a thing as crime existed," but, when a body turns up inside a water-tank of one of the green houses, he realized he had been "attempting the impossible."

The first half of the book is well-written and does a fine job in conveying a holiday atmosphere with something dark and evil lurking beneath the surface, but, as said, it takes a while to get there and this may frustrate readers who prefer a neat corpse in the first quarter of a mystery novel – or even in the first chapters or pages. However, my main objection to this is that the first half only showed the treacherous surface of the case and, as a consequence, Duncan had to cram all of the meat of the plot into the second half of the story. And the problem with that is the plot is not exactly waver-thin. On the contrary!

Behold a Fair Woman is made up of an intricate, maze-like web of hidden relationships, double identities and numerous potential motives, which makes the plot a tight-rope affair when it comes to fair play. Granted, all of the information is fairly shared with the reader, but some of that information came very, very late into the game. Because most of the important plot-points had to be crammed in this second half. It often came just in the nick of time, but late enough to seriously hamper the armchair detective in arriving at the correct solution. However, Tremaine himself does not arrive there until the very last moment, during the tragic finale, when the sudden rush of events allows him to connect all of the puzzle pieces inside his head. So, I'm probably needlessly nitpicking here again. Let's just say some of the information arrived a bit late.

In any case, I still very much enjoyed Behold a Fair Woman. The backdrop of the plot was as beautiful and tranquil as the illustration on the front-cover suggests, which proved to be an excellent stage for the intricate detective story Duncan imagined. Some readers might be annoyed at the leisure pace of the first half, but the reward comes after the murder is committed and Duncan reveals the webwork of a plot he craftily spun around the seemingly innocent events from the first hundred pages.

However, I recommend readers who are new to Duncan and Tremaine to start with the excellent So Pretty a Problem, which has a fascinating premise and is a locked room mystery to boot! A locked room novel that never seemed to have been acknowledged as one. Even the late Robert Adey overlooked when he compiled Locked Room Murders (1991)!

So, let me close this review by saying that I might pry Duncan's Murder Has a Motive from my TBR-pile sooner rather than later. Stay tuned!
Geplaatst door TomCat on 2/09/2017