Putting Down the Dog

"The impossible, the possible, and the probable were sorted into groups, and from the kaleidoscopic jumble of evidence was formed a pattern."
- Ngaio Marsh (Death at the Bar, 1940)

Joanna Cannan came from a family with a high concentration of published authors and took her first, tentative steps in the world of literature at age ten, when she helped her sister edit The Tripled Crown: A Book of English, Scotch and Irish Verse for the Age of Six to Sixteen (1908), but, as a novelist, she would garner success as a writer of children books and detective fiction. 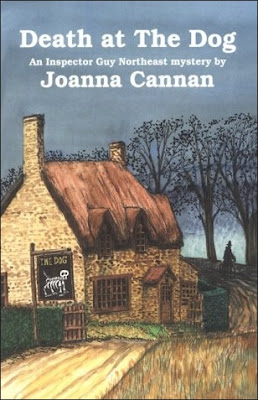 Cannan is perhaps not one of the best remembered figures in the world of detective fiction, however, she has enjoyed a longer print-run than many of her contemporaries. Several of her mystery novels, such as Body in the Beck (1952), were reissued as large print editions in the Linford Mystery Library and she rode the first wave of the current Renaissance Era when the Rue Morgue Press reprinted two of her books in 1999 – namely They Rang Up the Police (1939) and Death at the Dog (1940). They must have been eagerly picked up at the time, because they were both out-of-print again halfway through the previous decade.

I guess that's why she, sort of, receded into the background again, but something put her back on the top of my list. I don't actually remember what, but some comment here or a blog-post there made me move her to the top of the pile.

Death at the Dog takes place in the countryside village of Witheridge Green during the first months of the so-called "Phoney War," which began with the British and French declaring war on Germany and ended with the invasion of the Low Countries – which took place between September 1939 and May 1940. The opening chapter mentions "it was only six weeks since the beginning of the war" and this places the events of the story in the second and third week of October.

So only six weeks since war was declared, but so far, the only noticeable effects were the rigidly enforced blackouts, the mobilization of the army, petrol shortages and Londoners who were fleeing to the safety of the countryside. All of these problems did not bypass Witheridge Green and in particular Eve Hennisty, licensee of the local pub, called "The Dog," who worries about the black paper that has already began to warp, tear and split. As well as the disastrous effect it has on the amount of visitors who enter the more exclusive lounge bar of the pub, but they also have lingering, old-world problem hanging out in the bar.

Old Mathew Scaife is the local squire and the largest landowner in the county, but, during his stewardship of the ancient estate, the family home had "decayed into a ruin" and "thistles and nettles advanced like armies" on the surrounding grounds – constantly appearing in court for his neglectfulness and ignoring regulations. He was also an unpleasant character who has been called "that begotten old reptile" and "foul old beast." And his latest scheme involved evicting long-standing tenants from their cottages and let them to London evacuees at a much higher price.

So there are more than enough suspects when Mathew Scaife is found slumped over his table in the lounge bar. Dead as mutton. One of the pub's patrons had jabbed the old man in the back of the neck and injected him with a deadly dose of nicotine!

I've to point out here that Death at the Dog was published in the same year as Ngiao Marsh's Death at the Bar (1940), which also concerned a very unusual poisoning of a prominent person at a bar and a game of darts played a role in both murders. However, it's unlikely that one influenced the other, because they must have been written around the same time, which is what makes the resemblances all the more amazing. 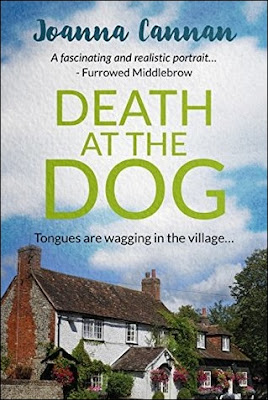 Secondly, isn't it baffling that there are so few mysteries with a pub-setting? You'd think it would figure more prominently in detective stories from the British Isles, but I could not think of any other example. Anyhow...

Detective-Inspector Guy Northeast is put in charge of the case and quickly comes to the realization that "two-thirds of the population of Witheridge Green" had a motive to murder the unpopular squire, but only a handful of them patronized the lounge bar on the night of the murder. And this gallery of suspects includes the victim's two sons, Edward and Mark Scaife. An architect, by the name of Adam Day, who "had been too young to fight in the Great War" and was now, frustratingly, "too old to fight in Hitler's War." He was in the lounge bar at the time of the murder with his wife, Valentine. There are also the Franklands: David is on the staff of a struggling newspaper, while Bridget is a fervent farmer and naturally came into contact with Scaife. But the most likely suspect of the lot is "a lady novelist," Crescy Hardwick.

Crescy Hardwick is an unpredictable, somewhat eccentric woman you either liked or disliked, who lived in a rented cottage with several dogs, cats and a one-eyed pony, but Old Scaife has given her a month's notice to vacate the premise she has come to regard as home – which lead to a confrontation in the pub. Hardwick called him an a "bloody old profiteer" and confessed she had been "planning murder" ever since she received his letter. But there's also physical evidence pointing in her direction: she possesses a book on toxicology with the page about nicotine poisoning dog-eared, possessed the poison and she used powdered pumice to clean the harnass of her pony. There were traces of powdered pumice found inside the needle-wound in Scaife's neck.

However, Northeast is reluctant to take the easy route and tag her as the murderer of the old man. So he has to piece together an alternative explanation from such clues as an electric fan, a dud dart and a stolen bicycle, which reveals a well-hidden murderer. But this explanation has also one notable weakness: it's too clever for its own good and a trick that simply might not have worked. For one thing, Northeast admitted, in the final chapter, that the murderer probably had tried to kill Scaife before, because the method was depended on the right set of circumstances and (as it turned out) even sheer chance. So this puts a strain on the believability of the overall solution and you can't help but wonder if it had not been easier for the murderer to engineer an accident in the dangerous, rundown surroundings of his own home.

That being said, Death at the Dog was still a fairly competent and interesting detective novel in the vein of such literary Crime Queens as Dorothy L. Sayers, Ngaio Marsh and Dorothy Bowers, which comes recommended to readers who love that particular mode of crime-fiction and those who are fascinated by mysteries that take place during World War II.
Geplaatst door TomCat on 2/16/2017