Brian Flynn's The Edge of Terror (1932) is the twelfth title in the Anthony Bathurst series and part of the much deserved, long overdue second set of reprints, published by Dean Street Press, which nearly became "the book that got away" as not even Flynn's estate had a copy of it – only copy for sale came with "a stratospheric price tag." Luckily, a generous collector came to the rescue and made his copy available to Steve Barge and DSP.

However, the extreme scarcity of copies explains why The Edge of Terror never figured or was even mentioned in connection with a very exclusive list of vintage detective novels and short stories. The serial killer tale! 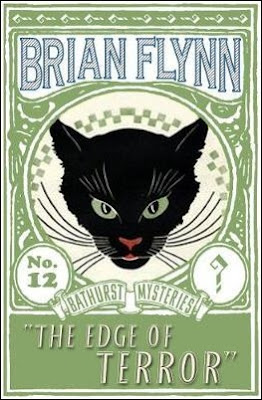 Steve Barge, the Puzzle Doctor, wrote in his introduction that the serial killer "posed a problem for the writer of the pure mystery," mainly centering on the motive, which leaves the writer with "two primary options." The victims are either linked or picked at random. The locked room mystery, the closed-circle of suspects and the dying message as restrictive tropes, but, compared to the serial killer, they're open worlds that are still being explored today. And how ironic it's that the serial killer has become a staple of the modern crime novel.

Now, to be honest, the giants of the past were very hit-and-miss when trying to tackle the serial killer with Agatha Christie's The ABC Murders (1936) and Ellery Queen's Cat of Many Tails (1949) standing as the iconic, Golden Age serial killer novels, but John Dickson Carr's Captain Cut-Throat (1955) and William D. Andrea's The HOG Murders (1979) found two nifty variations on the two previously mentioned options – cementing a spot right underneath Christie and Queen. But there were also some real stinkers. Such as Philip MacDonald's massively overrated Murder Gone Mad (1931) and Jonathan Stagge's lackluster Death's Old Sweet Song (1946), but opinions differ on those two. Carr heralded Murder Gone Mad as one of the best crime novels of all time (no idea why) and Curt Evans valiantly defended Death's Old Sweet Song against its detractors in the linked review. We shouldn't overlook Gladys Mitchell's The Rising of the Moon (1945), which offers the reader an experience all of its own.

So, as said above, the result varies enormously, but where does Flynn's The Edge of Terror rank on the list of Golden Age serial killer novels? Let's find out!

The Edge of Terror is narrated by Dr. Michael Bannerman, village physician of Great Steeping, who six months previously was taken into the confidence of Inspector Goodaker about a threatening warning letter they received. A letter promising to remove "one of the most prominent citizens of your most atrocious town" by "by the 31st day of August next" and “the matter may not end there." The letter signed "The Eagle." They assume it's a hoax or someone trying to stir the pot, but, on August 31, Goodaker calls Dr. Bannerman to tell he had received a second letter announcing the murderer's arrival. And the next morning, Dr. Bannerman receives a second call informing him a milk boy had found the body of Walter Fredericks in Taggerts Lane with his throat cut.

Walter Fredericks was one of the richest men in the district and owned, among other things, two big cinemas. So the murderer couldn't have picked a better victim to create a first-class sensation, but what the murderer couldn't have foreseen is the presence of a holidaying murder-magnet, Anthony Bathurst, who's immediately roped into the case by the Chief Constable. When the murderer strikes down another member of the Frederick family, the motive appears to be a personal one, but a third murder seems to break the link. It's this third murder that's the most interesting of the lot.

Fredericks owned two cinemas and in one of them, Beaufoy Cinema, the people in attendance were startled by "a piercing scream that was easily separable from the "talkie" to which they were listening." The body of the girl in charge of the confectionery counter was found lying close to the top of a flight of stairs with a knife wound.

John Russell Fearn's One Remained Seated (1946) and Pattern of Murder (2006) made me wonder if there were any more detective novels with a cinema setting, which was actually rarely used, but have since found several additional titles – one of them being another DSP reprint, Moray Dalton's The Art School Murders (1943). The Edge of Terror definitely belongs on that list and gives the reader a brief, but welcome, peek behind the scenes of a 1930s cinema through the questioning of a uniformed boy who sold chocolates and cigarettes to the patrons ("on a tray suspended from his neck") and found the body. This leads to the clue of "little blurred blot of pink cream" that "is going to bring a man to the gallows."

There's not much more I can tell about the plot, because, as Steve noted in his own review, The Edge of Terror is something of fairground ride of novel, but have to compliment Flynn for his use of a neighborhood patrols as a response to mounting body count. A logical response to a vicious killer roaming a small community that's too often absent in these kind of serial killer stories, e.g. Paul Halter's L'arbe aux doigts tordus (The Vampire Tree, 1997). Secondly, Flynn once again shows here that he was to the false identity what Christopher Bush was to the unbreakable alibi and Carr to the locked room mystery. It's fascinating how some writers succeeded in making their names synonymous with certain tropes.

My sole complaint is that the finer details of the motive, which is the linchpin of the serial killer story, were obscured until Bathurst's explanation, but, on a whole, it was tremendously fun read and a good, early attempt to wring a proper detective story out of the work of an apparent homicidal maniac. The Edge of Terror doesn't soar to the same heights as The ABC Murders, Cat of Many Tails or Captain Cut-Throat, but it's mostly certainly a cut, or two, above most of the other, lesser-known Golden Age serial killer novels. Flynn was great!
Geplaatst door TomCat on 9/07/2020