Simon Clark's novella "The Climbing Man" is a pastiche of Conan Doyle's immortal detective specifically written for an all-original anthology of new Sherlock Holmes stories, entitled The Mammoth Book of Sherlock Holmes Abroad (2015), which Brian Skupin listed in Locked Room Murders: Supplement (2019) – describing a honey of an impossibility. This time, it was not the promise of an original-sounding locked room murder that attracted my attention, but the archaeology-theme and backdrop. I love archaeological mysteries and there are not enough of them. The impossible crime here is merely a bonus. 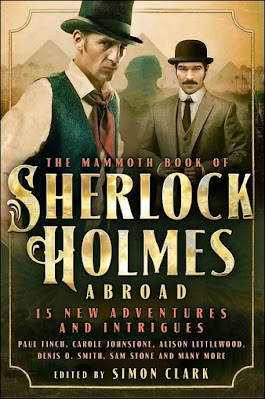 "The Climbing Man" takes Sherlock Holmes and Dr. Watson to the cradle of civilization, Mesopotamia, tasked with stamping out "a vipers' nest" of plunderers determined "to loot Mesopotamia of its ancient riches." A criminal gang who employed Arab riflemen, clad in gray, who passed themselves of as legitimate protection for travelers and archaeologists.

When the story opens, Holmes and Watson have made off with a dhow (sail boat) crammed with stolen artifacts, but the gray-shirts on the riverbank pepper the boat with bullets and they're pretty much sitting ducks – even succeeding in wounding the Great Detective. Only the hand of providence guided the boat away from the gray-shirts, down the Euphrates, "towards one of the most baffling mysteries" they encountered. Holmes and Watson end up at an dig site of two archaeologists, Edward Priestly and Professor Hendrik, where two generations have been working on excavating the subterranean tunnels, basement and vaults of the buried city of Tirrash. A once legendary city referred to as Bibliopolis or the City of Libraries.

Three thousand years ago, the city was attacked and destroyed, but, before the barbarians destroyed and plundered the city, the people emptied the libraries of the clay tablets. These clay tablets were "carefully stored in the basements beneath the houses and sealed shut," which remained intact and undisturbed under the desert sands for most of recorded history. But a perplexing, modern-day mystery is discovered in one of its sealed chambers.

A few years ago, Edward Priestly's brother, Benjamin, vanished without a trace from the excavation site and a week ago, they discovered his naturally mummified body in a place that begs for a rational explanation.

During an exploration of an underground passageway, they discovered one of the many hidden vaults, doorway sealed with stone blocks, which "has not been disturbed in three thousand years" and began their meticulous, scientific examination – cutting a small aperture in the wall to look inside. What looked back at them was Benjamin's dry, shriveled face! A second aperture gave them a better view of the body, but it deepened the mystery only further with a second impossibility. The mummified body clung to the wall, facing the stonework, arms outstretched above his head as if he's climbing or "trying to escape from his grave." So the problem is twofold: how did the body end up in a 3000-year-old sealed and undisturbed chamber with four feet of dust covering the floor and how "the devil was he glued so high up on the wall" like "a gigantic spider?" And to give the problem some urgency, the guards hired by the two archaeologists turn out to be gray-shirts. The game's afoot!

The problem of the body in the underground sealed chamber has, as to be expected from its premise, a two-pronged solution. Firstly, the explanation as to how the chamber was entered is not something that will excite many locked room readers, but how the body ended up stuck to the wall was kind of marvelous. A trick that perfectly fitted, time-wise, with the type of impossible, or weird, detective fiction that being written during the Doylean era of the genre. It's the kind of trick/solution you would expect to find in L.T. Meade and Robert Eustace's A Master of Mysteries (1898). Unfortunately, "The Climbing Man" also shares the clunky, uneven clueing of the detective stories from that period. Such as when Holmes was collecting evidence and slipping it into an envelope, but Watson only caught a glimpse of "a glittering item." You have to wait until the solution to find out what, exactly, he found. So you only have some room to do some educated guesswork.

Nevertheless, neither the uneven clueing nor the anti-climatic confrontation with the gray-shirts could spoil this thoroughly entertaining and absorbing story that made excellent use of its archaeological setting. I also appreciate it when a pastiche treats someone's else creation with respect and not unduly temper with the original, which can be simply achieved with Sherlock Holmes by giving him a complicated, knotty problem to occupy "that remarkable brain of his." And that's exactly what Clark did here.

A note for the curious: "The Climbing Man" was not Clark's first foray into the realm of impossible crimes and locked room mysteries. Mike Ashley's The Mammoth Book of New Sherlock Holmes Adventures (1997) contains Clark's "The Adventure of the Falling Star," which is not listed in Skupin, in which Holmes is asked to investigate the disappearance of a meteorite from a collection in a locked laboratory. So, yeah, that story has now been added to my special locked room wishlist. Something else that's now on my wishlist is an anthology of Sherlock Holmes locked room/impossible crime pastiches (Sherlocked!).