This year, Viz Media will be publishing a translation of vol. 80 in Gosho Aoyama's long-running, immensely popular detective-series, Case Closed a.k.a. Detective Conan, which is amazing considering the first English release dates back to September, 2004 – roughly a decade and fifty volumes behind the original Japanese releases. So that backlog will be reduced to about twenty volumes by the end of 2021! 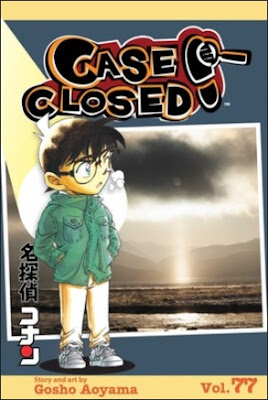 Unless there's a drastic change in their schedule, Viz should catch-up with the Japanese releases sometime this decade and hand me the excuse needed to finally reread the series. While complaining about having to subsist on one or two new releases a year. But that's a post-2025 problem.

So, for now, let's tackle vol. 77, which begins with the conclusion to the kidnapping case that ended the previous volume on a cliffhanger. Detective Takagi, of the Metropolitan Police, disappears without a word and the next day a package is delivered to police with a stripped and modified tablet showing a live camera feed of the missing policeman – gag and tied to a plank on a high-rise construction with a noose around his neck. Conan helped track down the kidnapper, but this person slipped through their fingers and now it has become a race against the clock to find the ever weakening and fatigued Takagi. Satisfyingly, the ending revealed the story was a little more than merely thriller-filler.

I'm not overly fond of kidnap stories as they tend to be an author's excuse for lazy plotting, but Aoyama regularly proves himself to be the exception to the rule and knocks out a good one every now and then (e.g. vol. 72). This story is another one of his demonstrations that some ingenuity can be applied to a kidnapping plot, but here it also helped that one of the character-centered plot-threads ran through the story. So not a bad start to a new volume.

The second story is fairly simple and straightforward with a who-of-the-three situation, which is typical for the series, but the plot has a great take on the alibi problem.

Conan, Anita and Takagi happen to be nearby when a sleazy tabloid publisher, Daisuka Katsumoto, dropped to his dead from a top-floor of a condo building with a phone in his shirt pocket, which has a recent message he texted to multi people – cleverly used to isolate the three suspects from the crowd of onlookers. Conan resents the message and three phones in the crowd began to buzz. All three suspects live in the same building as the victim and even worked under him, which turns out to give them a motive as he used them to concoct a dirty smear story. A story that resulted in a suicide. Only problem is that they all possess a very unusual alibi.

The three suspects lived on the third floor of the condo complex and the victim resided on the 26th floor, but "they claimed they could prove they'd been in their condos" and could not have made the seven-minute trip to the victim's condo. And reappear seconds later on the sidewalk. What they give as evidence is "a beer with fresh foam... steam from a coffee cup... and smoke from a cigarette." So no tinkering with clocks or people's perception of time, but foam, steam and smoke that gave the suspects a solid, ten-minute alibi! 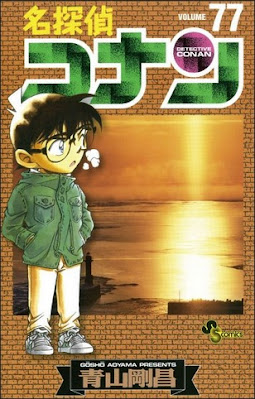 I can think of one other detective story that played with a similar idea, Arthur Porges' "Black Coffee" (1964), in which a burning cigarette and a cup of hot coffee in a locked room were the ingredients of a clever alibi-trick. The trick here is a little simpler in idea and execution, but, what propped it up, is (ROT13) gung gur zheqrere unq vzcebivfr ba gur fcbg. This made an otherwise simple trick a little bit more impressive. So, yeah, I liked it.

Unfortunately, the next story began very promising, but deteriorated and crumbled into one of the worst stories in the entire series!

Ten years ago, a nursery school principal stumbled on an uneven stone pavement with a fish bowl in his arms and was stabbed in the chest by a glass shard, but "the kanji for death was written in blood beside the corpse" – suggesting the hand of a murderer or even a serial killer. Conan/Jimmy's father dismissed and abandoned the case, unresolved, assuring everyone that they'll "never again see this bloody kanji." A decade later, a body is discovered in an alleyway with the kanji of death written in blood. However, the police defers the case to the division investigating thefts and robberies. So why do the homicide detectives refuse to touch the kanji deaths? Regrettably, the solution is preposterous and stretches credulity beyond what's reasonable to expect a reader to accept. You can blame that on the second death. I can accept that happening once, but not twice. This aspect of the story should have been solely focused on that past, unresolved case.

Only thing that somewhat saves this story is the ongoing, character-oriented story-arcs running in the background and the development in this story is very significant. Subaru Okiya observes Conan doing his Jimmy voice over the phone!

The closing story is mostly filler in order to setup vol. 78 and furthering those ongoing story lines, which begins with Anita giving Conan a Mystery Train Pass Ring to the Bell Tree Express. A steam locomotive, "made up to look like the Orient Express," which the Junior Detective League will be riding next week and Anita tells Conan she hopes "that's the only resemblance to an Agatha Christie novel" – a story that will be centerpiece of the next volume. I really look forward to its publication, but now they're on their way to a campsite in the woods. Naturally, they caught someone red handed trying to bury a body near a "Beware of Snakes" sign and this lands them in a heap of trouble. But the focus of the story is on how Anita is going to get them out of it (predictable) with ending showing that her identity, too, is compromised.

A note for the curious: Anita packed the (temporary) antidote to APTX 4869, but refuses to share it with Conan, because he would use it "to play out your little romantic comedy." I've been saying for years that the only logical flaw in the series is Conan/Jimmy continue to keep his secret from Rachel. The third story here showed why it's cruel to keep her out of the loop ("Don't creep me out like that! You're already the spitting image of him") and the ending why it would be valuable to have her in on it. It's not like she would be any more or less danger than usual.

So, on a whole, this was a very uneven volume, but liked the conclusion to the kidnap story and the alibi-trick of the second story with the two weaker stories benefiting greatly from all the character-development and story progression being played out in the background. Not too badly. I really look forward now to reading the next volume!