Inspector De Klerck and the Corpse in Transit (2021) by P. Dieudonné

Last year, I reviewed P. Dieudonné's third novel, Rechercheur De Klerck en de ongrijpbare dood (Inspector De Klerck and the Elusive Death, 2020), which spectacularly broke away from the Amsterdam School of Dutch politieromans (police novels) to present a classically-styled detective novel coated with a modern varnish – centering on no less than three fantastically done, dare devil impossible crimes. Not something you would expect from A.C. Baantjer or his followers. 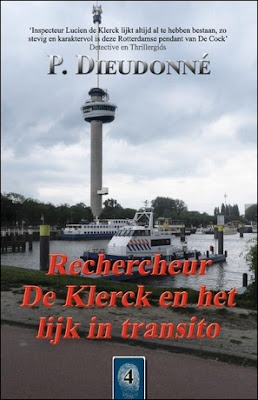 So I wondered what, exactly, Dieudonné had in store with his fourth novel, Rechercheur De Klerck en het lijk in transito (Inspector De Klerck and the Corpse in Transit, 2021). An unbreakable alibi? A dying message? Another impossible crime or locked room mystery? The story turned out to be a straightforward, Baantjer-style police novel, like Rechercheur De Klerck en het doodvonnis (Inspector De Klerck and the Death Sentence, 2019), but with more plot-threads, solid piece of misdirection and a genuine whodunit pull.

Alexander van Oldenborgh is the fourth-generation director of Van Oldenborgh International Movers, specialized in removals on a global scale, who came to Inspectors Lucien de Klerck and Ruben Klaver, of the Rotterdam police, to file a report – as he has been receiving telephone calls and letters with "a threatening, insinuating undertone." The threats come from an ex-employee, Jos van Trijffel, who raped a female co-worker thirty years ago and "simply disappeared from the face of the earth." Shortly after Van Oldenborch's departure, De Klerck and Klaver are dispatched to a brothel where a man has been shot and killed before he could get back in his car.

The victim happens to be a long-time employee of Van Oldenborch's company, Wilbert de Zeeuw, who caught Van Trijffel in the act thirty years ago before he escaped and disappeared. But is there a connection or merely a coincidence? De Zeeuw was talking with a man at the club, named Eddy, who was overheard saying to the victim "don't think I'm going to save your ass." He also had more money than can be accounted by his salary. So was De Zeeuw a casualty of "a heated conflict among criminals" or the victim of a revenge killing? De Klerck and Klaver have more on their plate than just this one murder.

Inspector De Klerck and the Corpse in Transit opened with Klaver telling De Klerck that the half-decomposed, unidentified remains of a man was discovered that morning on the Maasvlakte inside a shipping container from New Jersey. He was shot to death with the crime scene likely being on the other side of the world, which is a nightmare for both the American and Dutch police. So they're glad the case is a problem for the harbor police, but, as you probably guessed, there's a link with their investigation. However, the solution to this plot-thread is not as obvious as it appeared to be on first sight. On a somewhat lighter note is the friendly competition playing out in the background between the police of Rotterdam and Utrecht to catch a slippery lingerie thief.

Somehow, one way or another, everything is linked with the elusive, ever-present Van Trijffel in the background who might actually be responsible for thinning out the ranks of suspects as all of the murders carry the same M.O. – two gunshots to the chest. Dieudonné played a marvelous, but risky, hand in tying everything together while trying to distract the reader away from the murderer. I had my suspicions about the murderer, but this character was such a strange, oddly-behaving piece of the puzzle that I didn't know where, or how, it exactly fitted into the plot. So when that was explained, I felt a little cheated at first, but it really wasn't a cheat at all. Just a clever bit of misdirection that walked a fine, slippery tightrope with the stone cold motive being hardest part to swallow. Something that initially didn't ring entirely true, but, on second thought, it made sense and was (kind of) hinted at. Let's just say Dieudonné and De Klerck got the better of me here.

Inspector De Klerck and the Corpse in Transit can be summed as an old school whodunit, masquerading as a contemporary police novel, which gratefully exploited the modern world to create a knottier, more intricate plot than usually found in these type of police novels of the Amsterdam School. More importantly, Dieudonné figured out how to write a Baantjer-style novel without becoming a pale, watered-down imitation. So many have tried over the decades. For example, they gave the 2000s TV adaptation of Janwillem van de Wetering's Grijpstra & De Gier a diluted, Baantjer-like formula. Even the man himself, Appie Baantjer, tried to catch lightening in a bottle twice when he co-created the Bureau Raampoort series with Simon de Waal in 2009, but they never got it down quite right. Most of them were more concerned with the recreating the superficial features that sold close to ten million copies and kept millions of viewers glued to the TV for more than a decade.

So most of his imitators and following have little more to offer than a nostalgic placebo, but Dieudonné created with Lucien de Klerck and Ruben Klaver that can breath on its own without being weighed down by the comparison, because he did two things radically different. Dieudonné smartly moved away from Amsterdam as a setting, which has been done to death, but also the attention given to the plots makes the series standout. Very few Dutch writers who tried their hands at one of these police novels gives this much care and attention to the plot, clueing and misdirection or continually showed improvement.

Needless to say, this series comes highly recommended to all my Dutch readers and look forward to the next installment.