The Chinese Doll (1946) by Wilson Tucker

Wilson Tucker was an American movie projectionist, theater technician and science-fiction writer who made his start in the science-fiction fandom as a fanzine publisher, notably The Planetoid and Le Zombie, which he did intermittently from 1932 to 2001 – coining the term "space opera" and invented "tuckerization." Tucker is considered to be one of the earliest and most influential figure in the fandom, but he put his name to something far more important. He wrote detective novels! 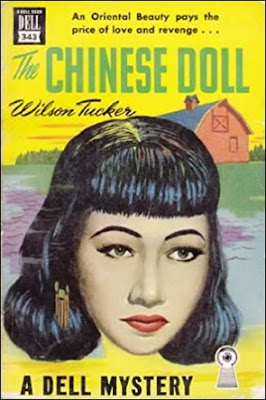 Tucker's series-character is a small town private investigator, Charles Horne, who helmed a handful of novels beginning with the subject of today's review, The Chinese Doll (1946).

The series is written in the hardboiled tradition with treacherous dames, dangerous gangsters and crooked politicians or bend coppers, but The Chinese Doll has a plot praised by Anthony Boucher in The San Francisco Chronicle. Boucher applauded the sound writing, exciting plot and "the surprise ending" with "a trick which Agatha Christie might well envy." So that earned it a top spot on my wishlist and recently stumbled across a cheap, battered copy of the Dell mapback edition. Why not? And the story definitely lived up to its promise. But you won't realize it until the penultimate chapter! The hallmark of a good detective story, but I'm getting ahead of myself.

Charles "Chuck" Horne is the only private investigator in the small town of Boone, Illinois, who was abandoned by the woman he loved, Louise, three years ago. Louise is a political reporter and her work brought her to the capitol, but promised to return in five years under one, nonnegotiable condition – he had to write her everyday. So every chapter is a letter to "my dearest Louise" in which Horne recounts what happened to him that day. And from these letters emerges a bizarre, complicated case that appears to be all over the place. But looks can be deceiving.

The Chinese Doll opens in Horne's office where's killing time, trying to keep warm and working on his book, Lost Atlantis, when "the goddamnedest thing" happened. A powerful, barrel-chested, but apprehensive, man entered the office and tossed "a lovely heap" of green bills on his desk. Harry W. Evans tells Horne that tomorrow, or the next day, he'll be in jail, but has no idea why. It could be for carrying a gun, spitting on the sidewalk or ignoring a stoplight. Evans simply doesn't know, but he wants Horne to be there to bail him out or contact his lawyer. So what he expects is to be framed, but nothing like goes on in Boone and the local publications "certainly wouldn't stand for monkey business in the police department." But a job's a job. Except that this one doesn't pan out quite as he expected.

Horne watches from his office window his departing, but Evans had taken five or six steps from the curb when a sedan smacked him down and "killing him deader than hell." 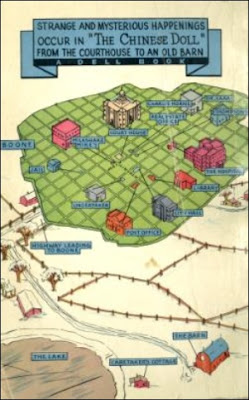 So starts a typical, hardboiled roller coaster ride taking Horne from Boone to Chicago, but the plot needed, or two, coincidences to keep everything moving with one of them being a little hard to swallow – which happened when Horne met a beautiful Chinese woman in a sedan. She mistakenly picks him up and drops him off at a remote barn. A place where things happen that aren't, strictly speaking, legal and turns out to be closely-linked with his dead client. Otherwise, the story moved along nicely as it began piling on the incidents and complications. Such as a body pulled from a frozen lake with a burned matchstick stuck in its throat, a Chinese symbol connecting various characters and incidents, Horne's expired detective license which somehow cannot be renewed and Evans membership to an amateur press association. Boucher remarked in his review that the press association plot-thread was fascinating, but "badly integrated" into the story. Tucker definitely indulged himself a little, but it didn't detract from the overall story and gave it a memorable scene.

Horne travels to Chicago to meet with an amateur publisher, Joquel Kennedy, who he coincidentally meet before their scheduled appointment in front of a store window. In the window, "stomping mechanically," is "zombilike something in striped trousers and frock coat" billed as "Roboto – The Electric Man! Is He Human or is He Monster?" There was a thick electric cable snaking from an outlet to an opening in the trousers, but Horne and Kennedy are the only ones who are skeptical. After all, they argue, "a real robot wouldn't be wasted in a drugstore window selling hair oil." Horn even subtly, and very politely, hackles the robot. I liked it.

There's not much else what happens between the opening and closing chapters, but turned out to be practically identical as my recent experience with Roger East's Twenty-Five Sanitary Inspectors (1935).

Twenty-Five Sanitory Inspectors, too, began as a well written, amusing enough mystery, but halfway through, you begin to wonder if its going anywhere and whether there's enough to make the ending payoff. Surprisingly, it managed to do just that! The Chinese Doll played the same game. It gives the reader the impression that they're reading a loosely plotted, coincidence laden dime novel that belongs on a drugstore pulp rack only to pull the rug from underneath the reader's feet in the end – revealing some of sliest clueing and misdirection I've come across in a long time. Now, not everyone's going to buy that audacious ending, but it was fairly done and a marvelously tricky tightrope walking act across a slippery wire. Tucker reached traversed it without losing his balance and breaking his neck. Most satisfying of all is how it was all done in the open!

So, all in all, The Chinese Doll might look like a run-of-the-mill, pulp-style dime novel, but with a great surprise waiting for the reader at the end of the ride and marred only by the many coincidences needed to link every thing together. Beside that one caveat, The Chinese Doll deserves to be better known just on the strength and originality of its solution and clueing. Even if it may raise an eyebrow or two.