Roger d'Este Burford was an English diplomat, poet, novelist and a screenwriter who made a small splash in the early 1930s, as "Roger East," with a handful of detective novels promising the arrival of a really first-class detective novelist, but practically stopped writing in the mid-1930s – sporadically returning to the genre in the '50s and '60s. So he's not all that well remembered today. This is a pity as the Roger East novels discussed online are generally positive and praised as intelligently written and characterized stories with often intricately worked out plots. 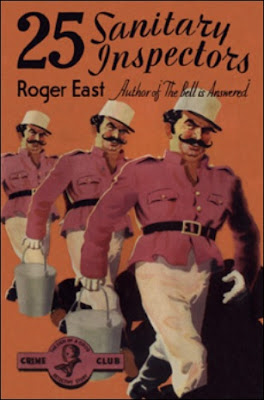 A few attempts have been made over the years to rescue East from the purgatory of biblioblivion, but without a lasting result. H.R.F. Keating picked the brilliantly-titled Twenty-Five Sanitary Inspectors (1935) for his 1980s "Disappearing Detective" series, which was an early attempt to bring obscure, long-forgotten writers and novels back into print. Back in 2017, Mad Sheep published another reissue of Twenty-Five Sanitary Inspectors, but that edition and publisher vanished as quickly as they appeared. I believe that 2017 edition is even harder to get now than the original or any of the other reprints!

Nevertheless, Twenty-Five Sanitary Inspectors is East's most well-known detective novel and the easiest one to get your hands on. I eventually lucked across a cheap copy and can understand now why his scarcity is lamented by so many of my fellow detective addicts.

Twenty-Five Sanitary Inspectors is the fourth and last outing for East's series-detective, Superintendent Simmy Simmonds, who Keating described as "something of a phenomenon in crime fiction," especially in 1930s Britain, as he's essentially the hero of a series of police procedurals – a sub-genre that would not become popular in Britain until the 1950s. Anthony Abbot, Helen Reilly and I believe Lawrence Treat were already experimenting with the police procedural in America. Superintendent Simmonds retired from Scotland Yard by the time of this fourth novel, but a forceful personality and a large fee gives him one last case as delightfully outlandish as Christopher St. John Sprigg's Death of a Queen (1935) and Peter Dickinson's The Poison Oracle (1974).

Twenty-Five Sanitary Inspectors is set in a fictitious island nation, San Rocco, which is "a pocket-sized republic" in the West Indies where President Miguel and his wife, Carlotta, rule the roost. But they're financed by the millionaire owner of the Acropolis Theatre, Cinema and Hotel, Pero Zaragoza.

Zaragoza invested a lot of time and money to transform San Rocco into the most talked of resort in the Atlantic, "the Jewel of the West Indies," but things begin to go south and Zaragoza believes "some unknown saboteur is at work." First they had to kill a rumor that there was an outbreak of yellow fever in the hotel and then the clean linen of every guest is cut to ribbons. Next the world famous, ticket selling headline dancer of the Acropolis Theatre, the Carnation, is kidnapped to prevent her from performing and the house detective has disappeared – probably "bribed or intimidated." So he reached out to the recently retired ex-Superintendent Simmonds, but Simmonds is of the opinion that he has "wrestled with enough problems" for one lifetime. However, simple curiosity and a check got the best of him. There is, however, a small problem. 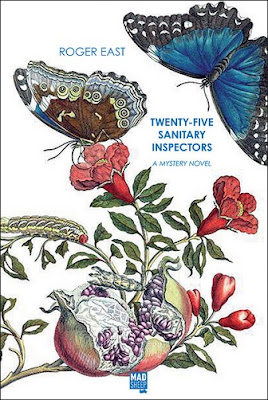 Back in Britain, Simmonds was backed by the entire, well-oiled machine of Scotland Yard, but in San Rocco he's a one-man show and his client agrees that the task is to complicated to be handled by a single man. So he ensures Simmonds not only gets all the assistants needed to properly investigate, but creating an entirely new department to give him both authority and an official position. Zaragoza goes to the president to ask him to create a new criminal investigation department with Simmonds as its (temporary) head, which is where the splendid book-title comes into play.

President Miguel agrees and gives the new Captain Simmonds, Chief of Detectives, the defunct, largely abandoned Ministry of Sanitation and their old uniforms, which only needed a change of buttons to turn them into police uniforms. The last man on his post at the defunct ministry is the ex-Minister of Sanitation, Aubrey Wilkinson, who's an overly enthusiastic and energetic young Englishman. Aubrey doesn't let any grass grow over the resurrection of his ministry as a criminal investigation department and began enrolling his ex-sanitary inspectors as plain-clothes detective. Yeah, the uniforms didn't go anywhere. Even with an official position, his own department and a "comic opera detective force" at his disposal, things don't get any easier for Simmonds as one of his detectives is murdered in an old-world way and there's attempted murder on his client – which killed one of his pet pumas. He also has to contend with San Rocco's Chief of Police, Colonel Sixola.

Some readers will probably scratch their head halfway through as they wonder if the plot is going anywhere and if it's enough for a rewarding payoff. The storytelling and characterization is amusing enough with its fish-out-of-water situation and the snippets of San Rocco politics has a tinge of Yes, Minister. But the plot began to give cause for concern.

I don't know if it was a good idea to go all out with the misdirection to the point where a lot of readers can't see the forest for the trees, but Twenty-Five Sanitary Inspectors turned out to be first-class example of under promising and over delivering. First of all, two-thirds of the way through someone is murdered in a watched and guarded office. Sure, the solution is not blistering original, but fitted the circumstances of the crime. Much better was the brilliant, cleverly hidden alibi-trick that had been sneaked pass Simmonds and the reader, but these are merely the mechanics of the overall the plot. The real punch is in the who-and why. A knockout punch that doesn't come until the last chapter when the murderer is confronted and the original motive is revealed, which also revealed how deviously I had been hoodwinked. Well played, East. Well played. So you can expect it to make an appearance on my 2021 best-of list.

Roger East was not only an excellent writer, but evidently knew a thing, or two, about plotting and if Murder Rehearsal (1933), Candidate for Lilies (1934) and The Bell is Answered (1935) are anywhere near as good as Twenty-Five Sanitary Inspectors, he deserves to be reprinted. Is there a publisher out there who wants to adopt this unjustly neglected GAD writer? Have a heart and give him a home.