The Lucky Policeman (1938) by Rupert Penny

Rupert Penny's The Lucky Policeman (1938) is the fourth, of eight, detective novels in the Chief Inspector Beale series and Penny's present-day champion, "JJ" of The Invisible Event, named it his best novel in his blog-post "Policeman's Lot – Ranking the Edward Beale Novels" – praising it as Penny at his "most potent." A recommendation from Jim always need to be approached with some caution and his praise for Sealed Room Murder (1941) is dodgy as hell. But fair's fair, he was kind of right about Policeman in Armour (1937) and Policeman's Evidence (1938). 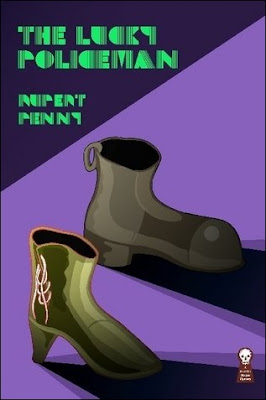 So I decided not to cynically go with the bottom-ranked title, She Had to Have Gas (1939), as my next Penny, but blindly trust Jim's judgment on this one. What could possibly go wrong?

First of all, The Lucky Policeman turned out to be a little different from what I expected. I thought it was going to be Penny's take on the Golden Age-style serial killer story, in which the detective has to find the common-link in a series of apparently random murders, but The Lucky Policeman is played like a straight detective story with the serial killings taking place in the background. Well, more or less.

Professor Hilary Peake is an American psychiatrist and "the gold-star alienist" who came to England, in 1931, where he bought a large, old mansion in New Forest and converted it into a private asylum – only has two patients on his hands when the story begins. A religious maniac and a man, Simon Selby, who's quite normal most of the time, but, every five or six weeks, "he breaks out into mental eruptions." Strangely enough, the only thing to lessen the periodic attacks is to let his hair grow unrestricted and denied him the attentions of a barber for the past three years. Nothing else was achieved and Selby became Peake's most puzzling patient. And then he unexpectedly escaped under very peculiar circumstances!

The nurse discovered a dummy in Selby's bed, two of the outside windows bars were ripped away and missing. Selby was gone and nowhere to be found. A week after his escape, people began to disappear from the area of New Forest: a servant girl, a girl hitchhiker and a reporter, which called for a wide and intensive search. But during the search, Sergeant Lee goes missing and his body is later found lying near a tree with a stabbed with something that left a hole "as big as a two-shilling piece" behind his right ear. Even weirder is that the murderer had taken the sergeant's left boot. Over the next few days, more bodies turned up with identical wounds and their left shoe missing.

Chief-Inspector Edward Beale, accompanied by Anthony Purdon, takes on the case and the multi-faceted problem gives them much food for thought. So they're not just preoccupied with chasing an escaped, homicidal maniac. 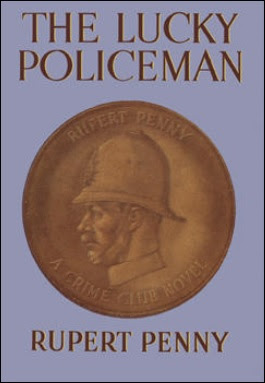 One of the central puzzles is how Selby managed to wrench two bars from stonework, scaled a brick, twelve feet high wall in his pajamas and evaded capture without supplies – making it a borderline impossible crime. Just a shame he didn't went all out with it as the explanation for the removal of the bars could have been used in two different ways to create a tight locked room scenario. However, the story was already quite packed and another plot-thread that has to be examined is Peake's backstory and why he left America, which happened when he got caught in the meshes of a New York matriarch who led "a home-made army against half the world" in 1929. She has her own reasons to suddenly reappear. There are the finer details of the case, like the shoes, weapon and a burglarized cottage, but Penny overlooked the body the reporter. I don't recall it was mentioned anywhere that his body was found, which made me very suspicious (in combination with something else) and distracted me from the real solution.

Having now read four of his novels, it becomes noticeable how much Penny liked his backstories and background details. Penny wrote and plotted like a historian, which is a double-edged sword as it could easily kill a story. This approach did murder the pace of Sealed Room Murder to the point where even the admittedly original locked room-trick couldn't save the whole mess, but it certainly benefited Policeman's Evidence with its historical subplot and treasure hunt. Penny's fondness for locked rooms, timetables and intricate, maze-like plots probably kept him in check, but shudder to think what the result would have been had he been more interested in characterization than plotting. Thankfully, we got the Rupert Penny puzzle edition.

Penny knows how to occupy his reader's attention with the various plot-threads and then abuse it to distract them, although not always fairly, but the equal amount of attention given to the clues makes it a pardonable offense.

The Lucky Policeman is, technically speaking, a sound piece of work with the who, why and how neatly coming together in the last chapter, preceded by a false-solution with an excellently handled twist, but I couldn't help feel a little let down – as some things turned out to be less inspired than anticipated. For example, I thought the clue of the stockings was much better than the shoe business.

So, all in all, The Lucky Policeman is a technically-sound, fair play detective novel with enough clues and red herrings to keep you busy for three or four hours, but, somehow, it wasn't quite as convincing or satisfying as it could have been. And while its light years ahead of Sealed Room Murder, I wouldn't place it above either Policeman in Armour or Policeman's Evidence. That being said, The Lucky Policeman still offers a highly unusual take on the GAD-type serial killer and it definitely helped that the murderer's identity was somewhat off the beaten path, which makes it well worth the attention of every fan of puzzle-oriented mysteries. Beale is starting to grow on me as a character ("Damn! I never thought of that"). You can expect more Penny in the future.