A few years ago, E-Pulp published Gruwelijk is het huwelijk (Marriage is Gruesome, 2017) by the impalpable enfant terrible of oranje pulp (orange pulp), Eugenius Quak, who doubles as author and the slightly narcissistic, ethically-impaired anti-hero and narrator – an ex-convict turned detective. A change of occupation that came about when he discovered Conan Doyle and Agatha Christie in the prison library. 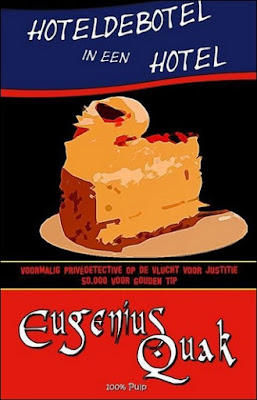 Eugenius M. Quak opened an outlaw detective agency without any of the legal paperwork, ethics or a moral compass, but Marriage is Gruesome ended with Quak triumphantly solving his first murder. Quak's brilliant piece of detective work also ended his agency and another spell in prison. So a pretty good and intriguing start to a new, offbeat series of tongue-in-cheek, pulp-style mysteries with a second novel announced for 2018, but it got delayed until April 1, 2021. Probably due to him being behind bars or something.

Hoteldebotel in een hotel (Pell-Mell in a Hotel, 2021) takes place nine years after Marriage is Gruesome and can be summed up as its long-delayed aftermath, but first have to talk about the presentation and packaging of the book. You see, the publisher of these two pulp mysteries, E-Pulp, is not canon/in-universe. Story-wise, Marriage is Gruesome was published by De Gele Kamer (The Yellow Room) and Pell-Mell in a Hotel appeared with The House of Nemesis, which comes with fake blurbs ("a disgusting attempt at literary whitewashing") and a fictitious fore-and afterwords defending and condemning the book – calling it either "a unique record of a unique man" or a "perverse fantasy." There's also a sly hint hidden somewhere in the presentation and packaging.

Eugenius Quak has some very good reasons to treat himself to an early release from prison, but the police disagreed and a nationwide manhunt is underway to apprehend "the dangerous criminal." So he decided to leave the Netherlands behind him. Only problem is that his getaway wasn't raising anchor for another three days and he needed place to hide from Commissioner Van Konijnenburg.

This brought him to his last-living relative, Aunt Phlox Leeflang, who runs a small beach side hotel, De Rode Haring (The Red Herring), where begins to work as her other nephew and "favorite houseslave," Urbanus Leeflang. However, the hotel has underwent some changes while he was away. Aunt Phlox had renevoted the hotel to cater to elderly, invalided guests and even had some permanent residents with a qualified nurse on staff and a fully stocked medicine cabinet. So the average age of guests and residents is 90, which doesn't make for the three-day holiday Quak had envisioned. Some of the guests turn out to be very troublesome and it doesn't take very long for a body to turn up.

I can't tell you anything about the victim or the precise circumstances of the murder, because Quak challenged the reader in the third chapter to see if they could guess who the victim was going to be – which he does throughout the story. Quak is an unreliable, dishonest and delusional narrator, but insists on playing the game fairly. Such as ending the second chapter with telling the reader he has already given them "the first and very important tip" and, "if you activate your frontal lobes and are a genius," you "can spot the culprit before I expose him." The clueing and misdirection here is as unusually good and interesting as it's uneven. 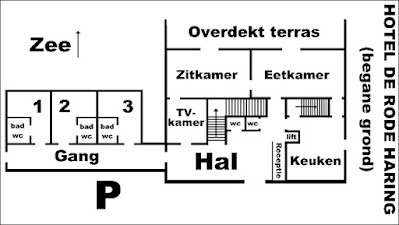 Two clues stand out in this regard. One of them can almost be described as a meta-clue and is, perhaps, a bit too fair as even the most casual mystery reader can pick up on it. If they're paying attention to what's happening in the story, that is. The second clue is a splendid demonstration how modern forensics can be used for piece of good, old-fashioned misdirection. It's one of those clues that moonlights as a red herring. Unfortunately, the motive is not as clearly clued as the who-and how, but not something that seriously detracts from the overall quality of the plot and story.

Just as interesting and fascinating as the clues and red herrings is how Quak has to grapple with a very precarious situation. After the murder, the police is all over the hotel and they're not only looking for a murderer, but, as told in the opening chapter, they know Quak has to be somewhere in the neighborhood – endangering both his freedom and his aunt's reputation. She asks him to solve the murder, but Urbanus can't go around "questioning the guests like the inspector does." Luckily, the hotel has a remnant from World War II. A secret passage/hiding place that he uses to eavesdrop on Inspector Den Hond as he questions the guests and staff of The Red Herring. I can't think of a better way to use a secret passage in an honest to god detective story. What a pleasure to read such a detective story in my own language!

Pell-Mell in a Hotel ends as ambitiously as its predecessor with a solution as provocative, and potentially controversial, as the detective who solved it, but everything fitted and worked. The clueing, red herrings, false-solutions, atypical detective work and fourth-wall breaking challenges all did their part in making this strange, pulp-style homage to Agatha Christie and Ellery Queen a success. I don't know if a third novel is planned, but, if the ending here is anything to go by, it's going to be bonkers.

On a final, semi-related note: I suspect Marriage is Gruesome and Pell-Mell in a Hotel were written long before they were published. Something tells me they were stuck in a drawer or on a hard drive for the past twenty years, or so, before being revived, revised and printed. One of the reasons is the general attitude of the story, but there's also an elderly lady with a wartime trauma, which, in 2021, doesn't entirely add up. She has a personal assistance who's half a century her junior and she told she been active in the resistance during the war. But even if she had been 17 or 18 at the time, she would have been pushing 100 in 2021. I know the story mentioned that the average age of guests was 90, but that's something that could have been changed or added later. Note that guests acted more like sprightly 60 and 70 year old's than people closing in on their 100 birthday. So it wouldn't surprise me in the least of there was an early, unpublished version of the story that was written in the early 2000s. Maybe even as far back as the late '90s.

Sorry for leaving so little room between this review and the previous one. My backlog has grown during the lockdowns and didn't want to wait two months with posting it. And a fitting follow up.