"I cannot agree with those who rank modesty among the virtues."
- Sherlock Holmes (Conan Doyle's "The Adventure of the Greek Interpreter," collected in The Memoirs of Sherlock Holmes, 1893)

Last week, I reviewed a Dutch collection of short stories, De geliefde die in het veen verdween en andere mysteries (The Lover Who Disappeared in the Bog and Other Mysteries, 2017) by Anne van Doorn, which was published by a small, independent, press called E-Pulp Publishers – who recently put out a book that beckoned my attention. A story that's perhaps best described as an infernally cheeky, ill-mannered, parody of the private-eye novel, but with a classically-styled plot and solution. And comes with a surprising amount of fair play towards the reader. 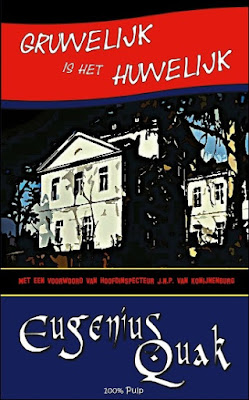 Eugenius M. Quak is not only the name of the author, prominently splashed across the book-cover of Gruwelijk is het huwelijk (Marriage is Gruesome, 2017), but also the narrator and protagonist of the story. As the main-character, Quak is something of an egoistical anti-hero who makes Philo Vance look like a someone you could spend a year with on a desert island.

Quak is a character described as a jack-of-all-trades with the ever-expanding ego of Zaphod Beeblebrox ("if there's anything more important than my ego around, I want it caught and shot now") and a career path as unusual as that of Eugène Vidocq. The opening chapter gives an overview of his life story and detailed how he became hopelessly "entangled in crime," but during one of his spells in prison he "got hooked on detective novels" and read all of the well-known classics – Conan Doyle, Agatha Christie and Dorothy L. Sayers. These stories gave him a new calling in life: he wanted to become a privé detective himself.

However, I have to stop here and warn the reader that the opening chapter requires patience and a persevering attitude to get through, because the narrative style, tone and personality of the Quak takes time to get use to. I believe the author, whoever he is, also needed a chapter to find his grooves with this character and crank out some of the cringe. But there's a notable uptick towards the end of this chapter when Quak begins his own detective agency without the proper paperwork or license.

So Eugenius Quak Private Detecting (EQPD) lacked all of the legal paperwork, rubber stamps and official signatures, but this gave the one-man detective bureau an edge over its competitors. Quak did not have to observe the rules and ethics governing normal private-investigators. Only problem is that he also lacked clients and this threatened to sink his business.

Thankfully, a filthy rich client came out of nowhere to save the day. I think Quak would have urged his reader to use the words "filthy" and "rich" independently, because the man who stormed into his office was "a monstrous person" with "a fleshy face full of pimples" – whose repellent mouth-and body odor are referenced throughout the story by Quak. The name of this ugly giant is Lourens Rotting and he had been minister in "one of those acid green or deep purple cabinets." After which he had become a captain of industry and raked in a seven-figure paycheck every year. Evidently, the man who had appeared before Quak was a not looker, but that paycheck netted him an extremely beautiful wife, Pippilotta Buitelaar, who may have an extramarital affair. Rotting wants an unassuming, little-known, detective to figure out the identity of this secret lover.

This is where Marriage is Gruesome actually distinguishes itself from other detectives novels, new and old, because the plot concerns itself with the kind of problem that other fictional detectives, like Nero Wolfe, would never sully their reputation on – let alone actually touching it. But to be honest, Quak is primarily engaged with trying to figure out ways to extract as much money as possible from his rich client. He has a small army of completely imaginary field agents working for him and writes several "peppered bills" for their reported legwork. These bills are written with, what we mockingly refer to in my country as, a "double pen."

Nevertheless, it has to be admitted that the inflated personality and antics of Quak helped carry this part of the book. A simplistic case of infidelity would have had a hard time sustaining the reader's interest had the investigation been a straightforward one with a respectable, serious-minded detective-character at the helm.

A good portion of the first half of the book takes place at the remote home of Rotting, named Groot Beukenstein, where Quak passes himself off as a former study friend of his client and tests his "Miss Marple Methodiek" – making everyone believe his scatter-brained and harmless. But during his stay, Quak discovers that Rotting is extremely jealous and hellbent on revenge. So this culminates with the discovery of a body floating in the swimming pool, which occurs during the final quarter of the book, but during Quak's "Hercule Poirot Moment," my favorite part of the book, it is demonstrated that clues were planted throughout the story.

Quak mockingly challenges the reader at the start of the sixteenth chapter, titled "Hoe ik de moordenaar ontmaskerde" ("How I Unmasked the Murderer"), in which he claims that the murderer's identity can be deduced from all of the information he gave in his report. The clues he had scattered throughout his narrative, "sown thickly on the ground," that you could almost trip over them. And this solution is as fairly clues as it is classical. The only thing you can say against it is that it hardly turns over a new, unwritten leaf in the annals of crime-fiction, but it is a grand and novel play on Christie's favorite motif of the internal triangle.

I strongly suspected the game that was being played by the murderer, but there was one tiny aspect that prevented from putting all my money on this character as the murderer.

All in all, despite my initial reservations and a lead character who requires time to warm up to, I ended up liking Marriage is Gruesome more than I expected. During the opening pages, I began to fear I had picked my worst read of 2017, but the story pulled itself together in the subsequent chapters. And the fairly clued, classically-styled ending contributed hugely to definitively swinging my opinion to a positive one. I'm more than willing to forgive imperfections when plot, particularly how it sticks or comes together, is actually good or clever. I'm glad to report that happened to be case here.

A second novel has already been planned for next year and the book-title is a bit hard to translate, but this is what I was able to make of it: Hoteldebotel in een hotel (Pell-mell in a Hotel, 2018). So I have that to look forward to. And in the meantime, I'll try to dig up something good and obscure from the Golden Age for the next post. So stay tuned!
Geplaatst door TomCat on 11/14/2017