"The unknown quantity, who may upset all our calculations. It's fatal to forget him. Whenever you make a list of possible criminals, you are apt to put yourself in blinkers and forget that anyone exists outside your list. Always put in X, and keep a sharp lookout for him."
- Inspector Mallett (Cyril Hare's Tenant for Death, 1937)

The previous book discussed on here, Joan Fleming's Polly Put the Kettle On (1952), was a modern-style, character-driven crime novel with a slow buildup and a dark, noir-ish soul, but the subject of today's review is the antithesis of that – a crafty, puzzle-oriented detective yarn from the 1930s. A detective story that toys with an array of identities, water-tight alibis and the severed parts of its titular body.

Christopher Bush's The Case of the Bonfire Body (1936), known alternatively as The Body in the Bonfire, is the fifteenth of sixty-three mystery novels about his series-character, Ludovic Travers. 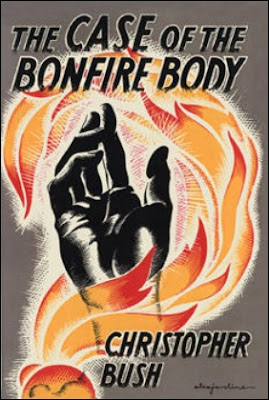 Travers is an "authority on economic history" and the celebrated author of a famous piece of literature, The Economics of a Spendthrift, who acted in the earlier books as the head of a Durangos Limited, which is the company that initially inserted him in numerous police cases – e.g. The Perfect Murder Case (1929) and Cut Throat (1932). Here, on the other hand, he plays the consummate amateur detective.

The Case of the Bonfire Body begins on the foggy evening preceding Guy Fawkes' Night and Travers is being driven home by his chauffeur, Palmer, when all of a sudden a running man emerges from the swirling fog. Curiously, the man, who "ran like the wicked," was dressed like a clergyman. Rev. Giles Ropeling is a local scoutmaster and his troop had erected a pyre for the annual bonfire, but that evening the B.B.C. had broadcast an interview with an expert and this person gave tips how to make a proper bonfire. So the reverend had decided to "pull down the crude mountain" with his scouts and reassemble it scientifically. However, when they pulled down the wooden edifice they made a gruesome discovery.

A headless body, like "a huge white slug," lay among the scattered pieces of wood, but not only the head had been cut-off. There were two bloody stumps where the hands were supposed to be. So the murderer had hidden the body inside the bonfire in the hopes that it would not be found until it had been "burnt to a charred mass."

Obviously, this body was going to pose a challenge to the investigators, but Travers has no idea how big of a challenge until he gets a phone-call from his friend, Superintendent Wharton of Scotland Yard, who tells him that a Dr. Bendall of Wimbeck Street had been murdered – stabbed to death in his own surgery. A note was found in the doctor's inside pocket that placed him on the scene of the previous murder.

I begin to suspect that these intricately-linked, double murders (committed around the same time) was a preferred plot-device of Bush, because he also constructed elaborate plots around double murders in Dancing Death (1931) and The Case of the April Fools (1933). All three have very different situations surrounding their respective double murders and they all come with their own unique solutions. So Bush appears to have gotten a lot of mileage out of this approach.

Apparently, the link between Dr. Bendall and the bonfire body, referred to throughout the story as "Guy Fawkes," is a burglary case from a decade ago. Dr. Bendall had caught two burglars in his home and one of them was the son-in-law he detested, which ended in a struggle and the sound of a gunshot. The son-in-law, Rolland Johnson, claimed his father-in-law had "snatched a gun from a drawer" and "deliberately tried to kill him." Evidently with the idea of freeing his daughter of a rogue. Dr. Bendall claimed that Johnson had pulled a gun on him and this side of the story was, surprisingly, backed up by his confederate, Henry Luke, who testified that Johnson was always armed on the job and claimed to have warned him of the potential consequences – which ended in a lengthy prison term for Johnson. The police detective, who had investigated the case at the time, believed Johnson was setup by Dr. Bendall, but there was nothing he could do about it.

So Johnson had a scores to settle upon his release from prison, but nothing in this case is as it appears on the surface and becomes increasingly complicated when one of the severed hands is found in a sewer. 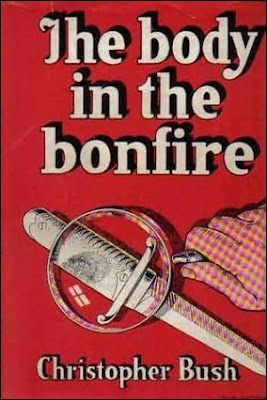 The severed hand proves that the bonfire body did not belong to the person the police had assumed it would be and this also provided the plot with a quasi-impossible situation, because the prints on the knife that killed the doctor matches the fingerprints of the dead man's hand. Even though the bonfire body had died before the doctor! The eventual discovery of the severed head could also have been played as an impossibility. However, as I learned from my previous reads, Bush only roams the borders between the regular detective story and the impossible crime, but rarely crossed the line separating the two – only the previously mentioned The Perfect Murder Case ventured pass it.

Nevertheless, it's interesting to see how closely related Bush was to some of the well-known locked room artisans of the period and these borderline impossibilities still make for pleasantly complex, twisty and involved detective stories. And if there's one thing Bush loved doing, it was piling on complexities.

The Case of the Bonfire Body has an abundance of complexities, which does not only deal with the identity of a mutilated corpse, but also has a particular ingenious alibi-trick to offer and grandly plays around with assumed identities. This game of alibis and identities even throws the murderer off his game! There's "a regular plague of burglaries" in the background of the story and there the problem of a rare coin, known as a Limerick Crown, which Travers had bought for his brother-in-law at an auction and had accidentally given to a street beggar selling matchsticks – who, as to be expected, is linked to both murders. And then there are the numerous references by Travers to "X," or "The Unknown Man," whose role in the murders they had not taken into consideration.

On a whole, Bush splendidly tied all of these plot-threads together and the end result is a classic, but minor, example of the ambitious, puzzle-oriented detective stories that were the standard-bearers of the genre's Golden Age.

My only complaint is that Travers and Wharton appeared to have been affected by the dense November fog permeating, because they each had moments of uncharacteristic density. Nick Fuller mentioned in his (spoiler-ish) review that Travers failed to draw the obvious conclusion when the Limerick Crown was found on the body of an unknown tramp, but Wharton had an equally dense moment. Wharton is not a character from the Lestrade school of fictional policemen and could easily carry a solo-novel without Travers, but here he was unnecessarily dense and obsessive when it came to the identity of the bonfire body. He preferred to accept that there were two murderers active in the same area, who littered the place with severed hands, rather than accept he was wrong. Only the pathologist's expert opinion that the severed hand fitted the bonfire body convinced him to finally abandon his pet theory. Wharton was not this dense in the preceding books.

Otherwise, The Case of the Bonfire Body is a cleverly conceived, tightly plotted affair with more than enough twists, turns and clues to keep even the most ardent armchair detective occupied for a couple of hours. I definitely found it a rewarding read and can recommend it without hesitation to everyone who loves a dense, puzzle-focused detective stories. And the good news is that this title will be among the second batch of Bush reprints by Dean Street Press, which are scheduled for release in late December or early January of 2018. So you better start updating that wish list of yours! ;)
Geplaatst door TomCat on 11/22/2017