A Monster in the Closet

"If, in the unhealthy atmosphere of an old house, the inmates got talking of ghosts and goblins, it might be that the consequences would be dangerous..."
- Dr. Lascelles (Fergus Hume's "The Ghost's Touch," collected in The Dancer in Red, 1906)

Edward Gellibrand is one of those mystery writers from the early part of the previous century who had the misfortune to have his work obscured or even obliterated from popular memory by the passage of time. 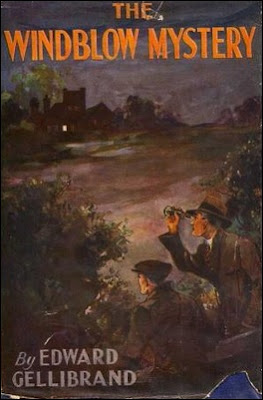 I can only say for sure that the name of Edward Gellibrand appeared on the book-covers of two locked room mysteries, The End of a Cigarette (1924) and The Windblow Mystery (1926), which have the character of Kenneth O'Brien in common and both titles were listed by Robert Adey in Locked Room Murders (1991) – the sole reason I even knew these books existed. Even the comprehensive GADWiki has no references to either Gellibrand or any of his detective stories.

Consequently, the only known detective novels by Gellibrand have been all but forgotten today and secondhand copies, while not eye-gougingly expensive, tend to be scarce and not widely available to ordinary readers. So imagine my delight when I came across a dirt cheap reprint edition of The Windblow Mystery when I was sifting through the catalog of Black Heath Editions. Yes, that's the same publishing outfit that brought the wonderful Rev. Ebenezer Buckle mysteries by Nicholas Brady back into circulation.

The Windblow Mystery has a plot that plays on the "room that kills" motif and is comparable to John Dickson Carr's "The Devil's Saint" (The Dead Sleep Lightly, 1983) and Paul Halter's La chambre du fou (The Madman's Room, 1990), but Gellibrand wrote in the style and spirit of Conan Doyle and Fergus Hume. I think the late 19th century writing style greatly enhanced the atmosphere of the haunted bedroom that apparently possessed the terrifying power to persuade its occupants into taking their own lives.

The haunted room in question is the largest bedroom in a centuries old manor house, called Windblow, which is currently owned by an eccentric believer in the supernatural, Morden Croker, who's also a social creature with "a mania for having his house full" and one of the people he roped in is a no-nonsense oil millionaire, Alexander Caulfield – who had reluctantly accepted the invitation. A decision he had come to regret, because the first evening at the manor house were filled with discussions about "unaccountable noises, strange lights, mysterious footsteps in the dead of night" and the age-old legend of the haunted bedroom.

Whenever a man sleeps in the cursed room with "some strong, evil passion," nursed in secret, the ghost haunting the bedroom will appear to confront this person and the occupant, in a fit of fright or madness or even remorse, does away with himself. Only possible way to escape death is the prospected victim has "pluck enough to go and meet his ghostly enemy." The last victim of the ghost was the previous owner, Richard Henderson, who, one morning, was found hanging from a hook in the cupboard of the bedroom. And that cupboard was more of a large, spacious closet.

Croker placed Caulfield in the haunted bedroom, assuming that the "practical, level-headed business" lacked believe in ghosts nor nursed any secret vices, but the nighttime weakens Caulfield's skepticism and begins reflect on how his all consuming passion for accumulating wealth has destroyed his family – which is when he gets a glimpse of the ghost. Caulfield sees a light from his bedroom window in the deserted portion of the house. A light of a pale, bluish color. On the following morning, the body of the millionaire is found hanging by the cord of his dressing-gown in the big wall cupboard of the bedroom. Dead as a door-nail.

The next part of the story tells of the arrival of Kenneth O'Brien and Alan Dawson, who are on a walking tour as part of their summer holiday, but they decided to end their tour and stay in the charming hamlet of Drayton's Oak. Soon enough, they not only learned about the suicide room at the nearby house of Windblow, but were also invited by Croker to spend some time there. And there they get a front-row seat to two additional dramas in the cursed and haunted bedroom of Windblow. 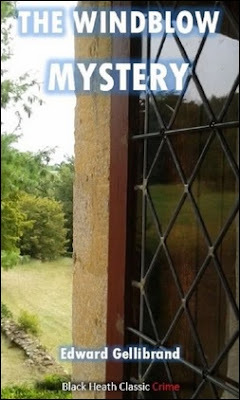 One of the other guests is a popular actor, Edward Payton, who wants to prove to everyone that "a man can sleep in that room without coming to harm." However, the following morning he's found dead, hanging from the cord of his dressing-gown, in the cupboard. It turns out that Payton, just like the previous victims, nursed a secret vice. Henderson was a hypocritical drunkard who preached at temperance meetings. Caulfield was a money-grubber who had neglected his wife and became estranged from his own son. Payton was secretly addicted to cocaine.

A fourth, seemingly impossible, hanging occurs when a friend of the actor, Piers Logan, engages a private-investigator, named Theodore, who is willing to spend a night in the haunted room, while everyone else is locked inside their bedroom by the local police constable, who keeps all of the keys on his person – making it impossible for anyone in the house to move around the premise. Nevertheless, the private detective is found hanging inside the cupboard when the bedroom is entered on the following morning!

A quick note for the curious: the unusual impossible situation of the suspects, instead of the prospected victim, being locked inside their bedrooms anticipated the (unresolved) locked room problem from Kay Cleaver Strahan's Footprints (1929).

Kenneth O'Brien becomes obsessed with finding the truth behind the "ghostly hangman" of Windblow and begins his own investigation, which revealed that a number of locals had seen lights moving around in the disused wing of Windblow. Some even claim to have seen a horned figure with a beard and carrying a burning candle around. Personally, O'Brien witnessed the senior partner of the local estate agency, Sebastian Rowe, surreptitiously enter the by then abandoned manor house after nightfall. O'Brien even strongly suspect him of being the hangman.

So all of this makes for an well-written and genuinely engaging read, one that really transports you back to the beginning of the twentieth century, but, as a mystery novelist, Gellibrand was a holdover from a previous era of crime-fiction and he did not at all adhere to the rules and standards that were slowly emerging at the time this book was published. A notable aspect is that O'Brien's own investigation is best described as groping around in the dark rather than actual detective work. He does talk with people and receives relevant information from them, but his most important discoveries are made when he's literary stumbling around in the dark.

There's also the problem of the murderer's identity, which is obvious, and the reason behind this sequence of apparent suicides is not properly clued at all, but was ingenious for the time. A devious little criminal enterprise that was made all the more believable, because a number of things went wrong. One of them being the presence of the inquisitive O'Brien. Equally novel and diabolical is the murder method that partially explained the locked room angle of the plot. Once again, it betrayed that Gellibrand really belonged to a previous, much earlier, era of crime-fiction, but I simply could not help myself from liking it. Stuff of nightmares!

That being said, I have to comment on the incompetent doctor who examined the victims, particularly Payton, because he could have prevented at least one murder. After the body of Payton is found, the reader is told that the medical examiner determined that "the neck had been dislocated," resulting in instant death, which apparently happened after the victim jumped off a small table with the cord tied around his neck. And here's the problem: a short drop inside a wall closet does not dislocate either the 2nd and 3rd or 4th and 5th cervical vertebrae, which requires a stretched rope (not a slip-knot cord) and a number of calculations that take the victim's weight and height into consideration – a method developed by a famous hangman, William Marwood.

If the doctor had pointed this out, the jury at the inquest would have returned a verdict of willful murder. The police, or even Scotland Yard, would have gotten involved and they would have looked into everyone's background, which would have revealed the connection that now only became apparent at the end of the story. This might have saved, at the very least, the life of the private detective, Theodore. I was annoyed his incompetence was never pointed out in the final chapter.

But enough of this nitpicking. The Windblow Mystery is, admittedly, a less than perfect detective novel that read like it was written twenty or thirty years before it was actually published, but this is what gave the story charm and character. On top of that, the explanation for the murders in the haunted bedroom reveal some flashes of ingenuity. Such as the how and why behind the hangings.

So, all in all, The Windblow Mystery is a well-written, engrossing detective story, but one you should read and enjoy on autopilot, because you'll not be able to piece together to full picture. And that'll only leave you frustrated.

On a final, semi-related note, I'll be sampling a handful of titles from Black Heath in the coming weeks. There were several detective novels in their catalog that looked promising enough to snap them up, but I'll probably return to Brady before tackling my newer acquisitions. So stay tuned everyone!
Geplaatst door TomCat on 11/02/2017