"We have in effect put all our rotten eggs in one basket. And we intend to watch this basket carefully."
- Colonel Von Luger (The Great Escape, 1963)

Recently, Dan of "The Reader is Warned" compiled a two-part list, titled "5 Impossible Crime 'Thrillers' to Try” and "5 More Impossible 'Thrillers' to Try," which made a decent attempt at listing all the notable, high-paced thrillers with a locked room or impossible crime element, but both lists omitted the best specimen of this particular blend of crime-fiction – namely Michael Gilbert's outstanding Death in Captivity (1952). After littering Dan's comment-section with recommendations for the book, I decided to take down my copy from the shelves to see if it could stand re-reading. And it absolutely did!

Death in Captivity was reprinted in 2007 by the now defunct Rue Morgue Press, under its US title The Danger Within, which came with a foreword by Tom and Enid Schantz briefly going over Gilbert's personal experiences as a prisoner-of-war in Italy during World War II. 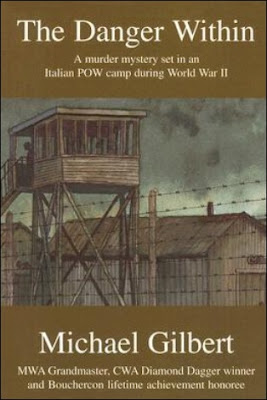 The foreword is titled "The Escapes of Michael Gilbert" and gives the modern reader an idea just how extraordinary this piece of detective-and thriller fiction truly is. Not only are the plot and setting practically unique within the genre, but many of the events in the book were inspired by Gilbert's first-hand experiences as both a POW and an escapee in enemy territory – which gave everything a chilling veneer of authenticity. Particular the depictions of everyday life at the prison camp, the secret tunneling activities in the various huts and the occasional pestering of the Italian prison guards ("a bit of sentry-baiting").

Another aspect that sets this book apart from other World War II mystery-and thriller novels is that it deals primarily with the Fascisti of Italy rather than the Nazis of Germany.

The Danger Within takes place in Campo 127, "easily the best camp" one of the prisoners had been in, but perhaps the most "comfortably lodged" group of prisoners are the six men held in Room 10 in Hut C. As a rule, the rooms were designed to hold eight men and usually overflowed with "ten or even twelve less fortunate prisoners." Captain Benucci had ordered the men, all of them notorious escapees, to occupy the same room. Reasoning that if he had "six dangerous criminals to watch, it was easier, on a whole, to have them together," but that only pooled all of their knowledge and experience in one place – resulting in "the oldest of existing undiscovered tunnels in the camp." A tunnel Colonnello Aletti, Commandant of Campo 127, claimed simply could not exist.

The entrance to this tunnel lay in the kitchen of Hut C and in the middle of this cookery, set in a six-foot slab of concrete let into the tiled floor, stood a stove. A huge cauldron, shaped like "a laundry copper," which hid a trapdoor to the tunnel and could only be revealed by the combined effort of four strong men with assistance of double pulleys – effectively evading discovery by being "too big to see." I thought this was a nice little Chestertonian touch to the all-important secret tunnel that will play a key role throughout the entirety of the story.

One day, the protagonist of the story, Captain Henry "Cuckoo" Goyles, crawls down to the tunnel to continue work, but discovers that during the night part of the roof had come down. Inexplicably, there's a body underneath the pile of fallen sand at the end of the tunnel. Something that should not be possible, because this person could not have gained access to the tunnel on his own nor could an outside group have entered the locked Hut C after nightfall. Even more troublesome is that the victim is identified as a Greek POW, Cyriakos Coutoules, who's suspected by everyone of being a stool-pigeon for the Italians or even a double-agent in the employ of the Nazis.

Two of the special detainees in Hut C, Captain Roger Byles and Captain Alex Overstrand, had previously uttered threats to lynch Coutoules. However, their immediate problem of Hut C and Colonel Baird, head of the Escape Committee, is how to tackle the problem of a dead man cluttering the best tunnel they had. So they decide to dump the body in a smaller tunnel, located in Hut A, that had been "allotted low priority by the Escape Committee" and stage a roof collapse there, but how they move the body from one hut to another, under the nose of the guards, is one of my favorite and funniest scenes of the entire story – something of a cross between 'Allo, 'Allo (war-time setting) and Fawlty Towers (the episode Kipper and the Corpse, 1979).

You occasionally get these brief burst of typical British humor. Such as when some of the prisoners are preparing a stage-play and they pick one in which one of the characters, rapturously, exclaims "Italy! Oh, it's hard to take in even the bare possibility of going there. My promised land, Doctor, which I never thought to see otherwise than in dreams." Needless to say, that line brought the house down. 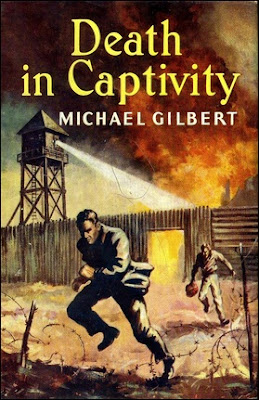 But, on a whole, the story-telling tends to be serious in tone, because the myriad of (potential) problems facing the POWs of Campo 127 are no laughing matter.

The events at the POW camp take place against the backdrop of the impending invasions of Sicily and the Italian mainland by Allies, eventually culminating in the disposal of Benito Mussolini, but the consequences of an Allied victory in Italy is a double-edged knife for both parties at the camp. On the one hand, the POWs fully realize the Germans aren't going to set free the sixty thousand prisoners in Italy and that, one day, they could simply find themselves being put on a train "to Krautland." On the other hand, the card-carrying members of the Fascist Party, such as Captain Benucci and the sinister Mordaci of the Carabinieri Reali, know they'll be put in front of a military tribunal when the Allies arrive – which would probably end with them having to face a firing squad.

So the inexplicable death of Coutoules and the accompanying cloud of suspicions does very little to improve the slightly strained situation at the camp, but the situation becomes rather serious when Captain Byles is charged by Benucci with the murder of the Greek POW and is placed in solitary confinement – condemned to die in several days time. Captain "Cuckoo" Goyles is asked by the Escape Committee to investigate who killed Coutoules, why and where. And, most importantly, how his body ended up in the tunnel.

In my opinion, the explanation for the impossible appearance of a body in a hermetically sealed, air-tight and blocked tunnel is as simplistic and logical as it's original. A one-of-a-kind impossibility in a completely unique crime novel that performed a perfect juggling act with its detective story elements, thriller components and spy material. Gilbert never allowed one of those elements to overshadow the other, but neither were they diluted. They worked in perfect harmony with one another. For example, the clues that will help you solve the detective story elements are provided by some of the more gruesome, thriller-ish aspects of the plot. You'll know what I mean when you get to it.

The Danger Within is an impressive and perfect latticework of differing genres, which is what makes it impossible to pigeonhole the book, but the climax of the story is a fine piece of wartime fiction as the inmates of Campo 127 prepare themselves to make "The Great Crawl." A fitting end to this semi-autobiographical wartime crime story. An ending that fitted like the final piece of the puzzle that completed the whole picture of this marvelously clever and exciting story. I simply can't recommend this one enough.

I'll end this review by saying that re-reading The Danger Within has inspired me to finally airlift my other Gilbert titled from the snow-capped tops of Mt. To-Be-Read. I'm not sure which titles actually reside there, but I believe they were Close Quarters (1947), Death Has Deep Roots (1951) and The Killing of Katie Steelstock (1980). So you can look forward to a review of one of those titles in the hopefully not so distant future.