The Room With Something Wrong

"There's no bogey in that room. But there was—and may still be—death in it."
- Lord Mantling (Carter Dickson's The Red Widow Murders, 1935)

Paul Halter's La chambre du fou (The Madman's Room, 1990) is the fourth recorded case of his primary series-characters, Dr. Alan Twist and Inspector Archibald Hurst, which has recently been translated and published by the proprietor of Locked Room International, John Pugmire – who recently also edited and published a massive locked room anthology entitled The Realm of the Impossible (2017). But I'll get to that One Thousand and One Nights of miraculous crimes and impossible problems later this month. 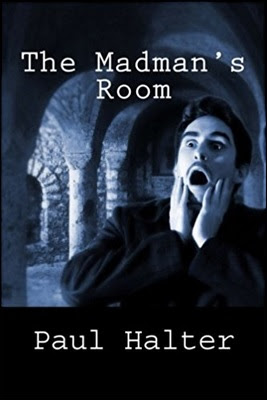 So, for now, let's take a gander at The Madman's Room, which is Halter's take on the "room that kills" variety of the (semi) impossible crime. However, I should note here that the book has been tagged by everyone as a locked room mystery, but the plot is actually a how-was-it-done centered around a cursed room (c.f. John Dickson Carr's "The Devil's Saint" from The Dead Sleep Lightly, 1983). I decided not to tag this blog-post as a locked room or impossible crime.

The cursed room here is part of "a well-proportioned XVIIth century stone construction," named Hatton Manor, of which the oldest part had been built by "a knight who fought in the Hundreds' Years War" and witnessed Joan of Arc being burned at the stake – a horrifying spectacle that continued to haunt him upon his return to England ("we burnt a saint"). Some believe that the guilt-ridden knight went mad and burned down the original structure, but he would not be the last person to lose his mind on that premise.

At the end of the 19th century, Hatton Manor was the home of Stephan Thorne and his family, which included a brother, Harvey, who had the promise of "a future literary genius." Harvey had been given his own room on the upper floor where night after night, year after year, he filled "ream after ream of paper." After two years, Harvey had completed a bulky, handwritten manuscript, but when his father read the manuscript a change came over him, grew ill and passed away. Everyone else who read the manuscript was left in a state of shock and Harvey was ordered to never take his accursed writing out of his room ever again.

Needless to say, Harvey was not pleased by the response his masterpiece received and, in turn, his relatives began to shield him from the outside world, because his mind was clearly unbalanced and he became a recluse in his private room – everyone who crossed the threshold was seized by "a curious and indefinable sense of unease." One day, cries were heard coming from the room and they discovered Harvey angrily convulsing on the ground. He died only a few minutes later, but left them with the chilling words they "will perish in fire" for their sins. Curiously, there was a wet patch on the carpet in front of the fireplace.

And not long after his passing, nearly the entire family perished in a fire and Stephan's pregnant wife, Rosemary, ordered Harvey's room to be permanently sealed.

The room remained sealed for decades. Until one of the two grandsons of Stephan and Rosemary, Harris Thorne, relocated his (extended) family to the manor house, which includes his wife, Sarah, and her parents, Mr. and Mrs. Howard Hilton. But also his brother-in-law, Francis Hilton, and his wife, Paula. Up to that point, the only residents of Hatton Manor had been Harris' brother, Brian, who lives there as a reclusive clairvoyant with a couple of servants.

Over the course of this story, Brain makes several astonishingly accurate predictions about love, money and misfortune. And the later pertains to his brother's decision to reopen the sealed room and use it as a private study. Shortly after the room is reopened, Harris is found beneath the open window of his study, in the rock garden below, with a fatal wound to his head. Even more eerily, there's a wet patch on the carpet. Just like what happened when his great-uncle Harvey died around the turn of the century!

So, there you have it. The premise of a classical, baroque-style detective story that could have been imagined during the genre's golden days and have to highlight two particular aspects of the plot I found to be absolutely endearing.

When Dr. Twist and Hurst discuss the peculiar circumstances surrounding Harris Thorne's apparent suicide, the later mentions that a secret passage had been found in the room. A passage that lead to the adjacent storeroom. However, the thick layer of dust on the storeroom floor demonstrated that nobody had entered it in many years.

Usually, these kind of secret passages are mentioned, but turn out not to exist, or offered as a completely underwhelming and disappointing answer to a locked room mystery, but never are they actually found and then eliminated – which is something I always wanted to happen for a change. Just have someone come across a hidden passage, or small cubbyhole, at the crime-scene only to have it eliminated as an entrance and exist (like it being bricked up or something).

So kudos to Halter for using the hidden passageway without incorporating it into the solution of the madman's room!

Secondly, I found the attempt on Halter's part to write a more character-driven detective novel to be adorable. Halter is not a mystery writer known for creating believable, three-dimensional characters and this book is no different in that regard, but the characters, or their actions, are given more consideration here. A good example of this is the prologue, which showed Paula had an intimate friendship with detective by the name of Patrick Nolan. A character who would later turn up in the story again to play a vital role in the unraveling of the mysteries that have plagued Hatton Manor for generations.

Nevertheless, Halter is not exactly a Christianna Brand in the character-department and, consequently, his cast-of-characters were only the proverbial cogs in the engine of the plot – who all played their part in "a chain reaction of events." Luckily, those events formed a pretty good, if somewhat imperfect, detective story.

You can compare The Madman's Room to La ruelle fantôme (The Phantom Passage, 2005), which had an excellent central problem and solution about a vanishing street, but was completely unconvincing when it came to explaining the visions from the past and future. The Madman's Room has similar strengths and weaknesses. 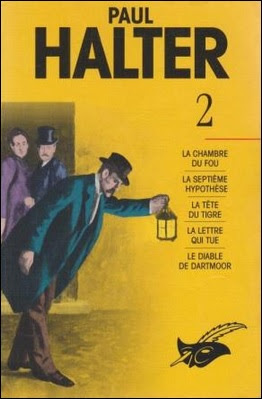 As a strength, you can point to the delightful back-story of the titular room and the maddening problem posed by the wet patches that appear on the carpet after each incident. The answer Halter provided for these wet patches was very clever indeed and represents the strongest strand in the twisted coil of plot-threads, which I was unable to figure out for myself (I did figure out who-and why).

On the weaker side, we have a shaky alibi that was created from "scratch in mere minutes" and someone has called, what made this alibi possible, ridiculously convenient. And I have to agree with that observation. I was also slightly underwhelmed by the answers that explained the divination's of Brian Thorne.

So, while the plot was a mixed bag of tricks, I still tremendously enjoyed my time with the book as a whole, which offered a fun, tricky and solvable detective story. To give you an exact idea where I stand on The Madman's Room, I can point to two other reviews of the book. My fellow locked room enthusiast, "JJ," awarded the book a full five-stars, while Sergio of Tipping My Fedora only gave the book two-and-a-half tips. If I used a similar rating-system, I would give The Madman's Room a solid three-and-a-half points. And that's not too shabby, I think.

Anyway, I better cut this already overlong, rambling review here and tell you that the next post will be about a small, little-known short story collection by a mystery writer who has been mentioned quite often on this blog. Oh, and this collection might contain one or two impossible crime stories. What a surprise!
Geplaatst door TomCat on 10/06/2017