Stratagems in the Snow

"But I'd much sooner have a jolly good murder in the village. A jolly good murder... would make Christmas jolly well worth it."
- Denis Lestrange (Gladys Mitchell's Dead Men's Morris, 1936)

Gladys Mitchell's Groaning Spinney (1950) is the fiftieth title in her series of wonderfully written, often unconventionally plotted, mystery novels about her cackling, basilisk-like psycho-analyst and criminologist, Mrs. Bradley – described by Mitchellites as a wintry story with "a vivid, picturesque seasonal backdrop" and one of her "most satisfyingly, well-clued solutions." Excitedly, this book is about to be reissued as a special Christmas edition, under the title Murder in the Snow, which is scheduled for release in early November.

So this fairly recent tradition of republishing classic, often obscure, Christmas-themed mystery novels continues to snowball ever larger. This year also saw the republication of Christopher Bush's Dancing Dead (1931), Anne Meredith's Portrait of a Murderer (1933) and Cyril Hare's An English Murder (1951). Curiously, the detective novel by Hare has not been reissued under its alternative title, The Christmas Murder, while Ellery Queen's The Finishing Stroke (1958) remains completely ignored in this category. 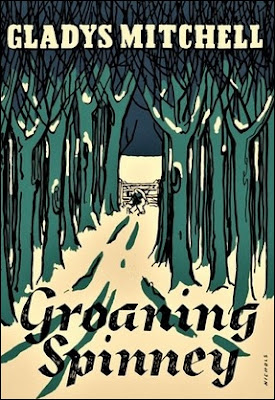 But who knows? Maybe next year some of these publishers will set their sights on these kind of holiday detective stories from the United States. But for now, I'll be looking at an earlier edition of Groaning Spinney.

Groaning Spinney takes place in the Cotswolds, nestled in south central England, which is famous for its ancient landscape with its rolling hills, rustic villages and charming hamlets. Jonathan Bradley and his wife, Deborah, had chosen the place to settle down and had purchased an old manor house, which came with a plot of land in a hilly, partially wooded area with "a dashing stream" and "a very well-authenticated ghost" of a nineteenth century parson, Rev. Horatius Pile – who can be seen hanging over a gate on moonlight nights. So the perfect place to raise a family.

Deborah had acted as a Mrs. Bradley's Sub-Warden at Cartaret College, in Laurels Are Poison (1943), where she was introduced to Mrs. Bradley's nephew, Jonathan, which led to their engagement by the end of the book. At the time, Mrs. Bradley had "greatly desired to find place in the family circle for the lovely Deborah" and her nephew had been "the vehicle for this inclusion." So Jonathan and Deborah invited their "Aunt Adela" to spend the Christmas holiday with them in their new home, but her arrival marked the beginning of a series of events that resulted in several deaths. And it all started very innocently.

On the morning after Christmas, the priestly ghost had left a trail of footprints, "like stockinged feet," in the snow and a witness claimed to have glimpsed the parson by "the snow-laden ghost-gate" at the top of the wood known as Groaning Spinney. But these locals stories of a ghost in the snow takes a macabre turn when Jonathan finds a corporeal form "slumped over the five-barred gate" and the body was "dusted over into ghostliness" by the last fall of the snow.

The body at the ghost-gate belonged to one of two cousins, Bill Fullalove, who lived with his relative, Tiny, as bachelors and according to the police examiner he had died of heart-failure due to cold and exposure, but a year ago he got himself medically examined for a life insurance policy and the company doctor had never seen a healthier man – or "tested a heart in better condition." So could the winter cold and snow have killed a healthy and robust man like Bill Fullalove?

It should be noted here that Mitchell was not necessarily a mystery novelist who was known for crafting elaborate, overly ingenious, murder methods, but she did come up with a couple of original gimmicks (e.g. The Man Who Grew Tomatoes, 1959) and this definitely one of them. A murder method as cold and clever as the one from Rex Stout's "A Window for Death" (collected in Three for the Chair, 1957).

Interestingly, the death of Bill Fullalove turns out to be nothing less than a perfect crime, because Mrs. Bradley admits that obtaining proof of murder is practically impossible. She does piece together how the murderer brought about heart-failure, based on such clues as dog-chains and trees, but dealing with the guilty party requires an unorthodox approach. Mrs. Bradley admits around the halfway mark that, "in this instance," revenge is her aim. And if you have read Speedy Death (1929), you know what she means by that. 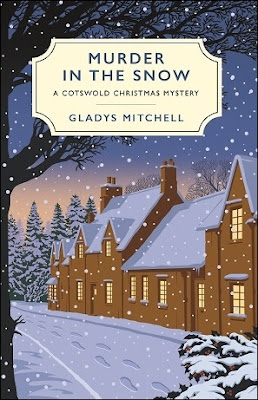 There are, however, other problems complicating the matter of the dead man at the ghost-gate. An anonymous letter writer is littering the village with poison-pen letters and one of them suggests that the dead man had been murdered – even accusing the local doctor of "conspiring to hush it up." Another letter tells the cousin of the dead man, Tiny, that the police suspects murder and advises him to prepare for an exhumation. The doctor observed that this "sort of round-robin stuff can have serious consequences" and these words prove to be prophetic when the poisoned remains of the Fullaloves' missing housekeeper, Mrs. Dalby Whittier, is found in a deep dip in one of the farmer's fields.

And from these various plot-threads, Mitchell weaved an intricate, but discernible, tapestry of a potential insurance fraud, disputable identities, missing animals, wholesale blackmail and a double murderer. Mitchell really deserves praise here, not only for crafting a clever and well-imagined plot, but also for telling the story in clear and straightforward manner without getting entangled in a confusing web of plot-threads, which (admittedly) was not something she always succeeded in doing – c.f. Hangman's Curfew (1941) and The Worsted Viper (1943).

One other thing that has to be mentioned about the plot is that certain plot-strands evidently took their cue from Agatha Christie's Peril at End House (1932), which pertained to both the insurance policy and an attempt to use a "ghost" to bring the murderer to heel. Nevertheless, that should not be taken as criticism of Groaning Spinney, because the book by Christie had only been used as a source of inspiration. But you'll see what I mean when you get to it.

If Groaning Spinney has any flaws, particularly when measured against her own body of work, it is that the murderer's revelation does not come as an earth-shattering surprise and the ghost-element is not used to full-effect. Mitchell can do so much better with ghostly legends. I also missed the presence of one of her convincingly drawn, plucky children or teenage characters. Such as Mrs. Bradley's great-nephew, Denis, who provided the opening quote for this blog-post. I believe the presence of such a character would have greatly enhanced the already excellent atmosphere and cast-of-characters of the book.

Otherwise, Groaning Spinney is pleasantly lucid, well-written and lively entry in the Mrs. Bradley series with an ingenious murder method and an active detective with a sense of humor. But what is perhaps the strongest aspect of the book is its splendidly realized country-side setting. Whether it is the wintry, snow-laden landscape of the opening chapters or the approaching spring thaw of the later half, you have to admit that bringing a setting to life with mere words is a talent she shared with her Arthur W. Upfield.

So this was an auspicious, and early, beginning of my 2017 reading of the Yuletide Mystery Novel. There are three additional titles on my TBR-list and might add one or two more to that list. So stay tuned.
Geplaatst door TomCat on 10/26/2017