A Wolf Among His Flock

Early last month, I became acquainted with the writing of James V. Turner through one of his Rev. Ebenezer Buckle novels, The Fair Murder (1933), which is part of a lamentably short-lived series published under the name of "Nicholas Brady." Four of the five titles in this series were released in a short burst during the early 1930s with the last one appearing a decade later in 1944.

I was favorably impressed by the extraordinary and increasingly darkening plot of The Fair Murder, told as a surprisingly conventional detective story, which convinced me to move as many titles from this brief series from my wish list to the big pile – a task that proved to be ridiculously easy. Nearly all of the Nicholas Brady titles are rarities on the secondhand book market and acquiring a copy will cost you a pretty dime. 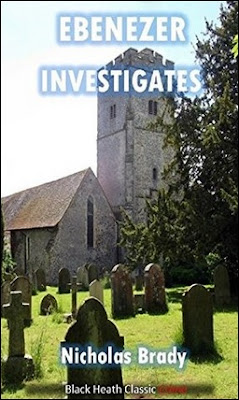 John Norris of Pretty Sinister Books mentioned in his review of Ebenezer Investigates (1934) it took him almost 15 years to find a copy and had to cough up $85 to acquire it. Fortunately, four of the books were reissued last year by an independent publisher, Black Heath Editions, who sell their books for a buck a pop. So I was able to pick up the book Norris chased for more than in a decade in less than a month and at a fraction of the price he paid for it. Life isn't fair, is it?

I decided to dip into this obscure series without too much delay and my pick turned out to be first-rate village mystery that can stand comparison with H.C. Bailey's Black Land, White Land (1937), Agatha Christie's Murder is Easy (1939), Max Murray's The Voice and the Corpse (1948) and Edmund Crispin's The Long Divorce (1951). Yes, the one by Crispin is a really good village-set detective story, JJ. Just read it already! Anyway...

I picked the previously mentioned Ebenezer Investigates, the next-to-last book in the series, which takes place in the small, quiet village of Dowerby. A place that has not felt "the touch of unnatural death" for more than a hundred years. There are, however, more than enough everyday problems and most of them were deemed "unfit for polite conversation." One of the forbidden subjects was talking openly about the three-hundred pound debt the village incurred on the construction of Village Hall, but the contractor, Harry Cross, is not to be ignored and pesters the villagers with demands to be paid, which makes him such a fearful pest that he becomes the new bogeyman used by parents to intimidate their disobedient children – who were now being told that "Harry Cross will have you."

However, the locals understood they had to be freed from this debt and decided to hold such "a bazaar as had never been heard of in the county" and elected their parson, Rev. Ebenezer Buckle, as chairman of the Organizing Commitee. Several months of hard, selfless work were invested in putting together the village bazaar and the event promised to be a huge success.

The "most attractive part" of the bazaar's program is a village-wide treasure hunt for two golden sovereigns and everyone who pays their two shillings to enter the competition receives a clue in riddle-form.

So, once Rev. Buckle had unburdened himself of the responsibility of his flower stall, the mystery-addicted parson entered the treasure hunt himself, but his clue brought him to a ditch that ran along the foot of the railway embankment and there he caught "the glimpse of something blue" on the other side of bridge – laying at the bottom of the trench. When he came closer, the blue thing turned out to be the body of one of the village girls, Constance Bell, with the handle of a knife protruding from a "ghastly wound" in her throat.

As you'd expect, Rev. Buckle is not going to sit idly by as a murderer stalks the grounds of his own village and unapologetically inserts himself into the investigation. And how! The title of the book may be dull and unimaginative, but aptly describes the parson's role in this story, because he's at the front, back and center of the investigation.

Luckily, Chief Constable Kail holds a favorable opinion of the amateur criminologist and accepts his help in untangling the litany of complications that this murders brings with it.

One of these many complications concerns Constance Bell's rumored promiscuity and the time she spend in London, which may or may not have something to do with a prominent member of the Dowerby community, but the detectives also have to poke around the (emotional) wreckage of her parental home – muddled by the disappearance of her mother and 3-month-old baby brother. The water is even further muddled by her obstinate father, who refuses to talk, and consequently has to be held as a material witness at the police-station. And then there are such problems as to why Constance was standing in a ditch, filled with three inches of water, when she was stabbed and why was a piece torn from her blue frock near her ankles. What happened to the book she was seen carrying around the bazaar and how the murderer manage to lug around a big, cumbersome carving knife (stolen from the village fete) without being seen. 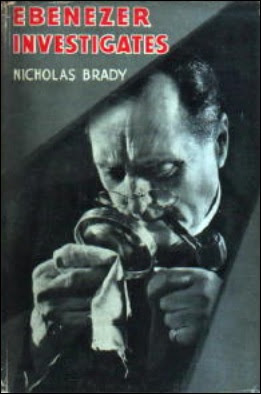 This apparently intricate maze of clues, differing plot-threads and misdirection will fully occupy the attention of any armchair detective and I'll freely admit that all of the bedevilment lead me down the wrong path regarding a vital plot-point, which made the startling simplistic solution a genuine surprise – one that came with a least-likely-suspect as killer. However, this person was being too clever and did too much to obscure the trail, which is what got this person noticed by Rev. Buckle. But the murderer was still clever enough to leave behind any actual evidence that could be brought into court. So the person had to lay a trap and resort to fabricating evidence in order to ensnare this person.

I'm aware that not every reader is charmed when a detective, especially in a classical mystery novel, goes down that route. Nevertheless, in this instance, I believe it fitted the plot of the story and the parson should be forgiven this indiscretion. If only for the wonderful performance he gave away in this book. A role that covered more ground than just detective work.

Not only did Rev. Buckle played the part of amateur criminologist, but also performed the role of enthusiastic botanist who practically chased everyone away from his stall with his intimate knowledge of flowers. Even more importantly, he never forgot his clerical duties to the village and was seen preaching several times from the pulpit, but also provided pastoral care when he mended a badly damaged marriage towards the end of the story ("the best piece of work" since "I was ordained").

This made Rev. Buckle a more well-rounded character that you can't help but like and admire. And invites you to read one of his other cases that were mentioned in passing. Luckily, The House of Strange Guests (1932) and Week-end Murder (1934) are currently residing on the semi-sentient hillside known as my TBR-pile.

On a whole, Ebenezer Investigates is arguably one of the better village-set mystery novels with a rock-solid, but relatively simplistic, plot and a solution that beautifully explains the clutter of complications that preceded the final chapters. Even the location of the two hidden sovereigns (from the treasure hunt) are revealed in the final pages. And what's more, if you paid attention to the opening chapters, you can probably make an educated case about their hiding place. Particularly when you know who hid the coins and the recurring theme in the riddles that were handed out as clues. So what's not to like?

Well, my next read is going to be that new locked room anthology, The Realm of the Impossible (2017), but might precede my mammoth (or two-part) blog-post with a review of Kindaichi or Case Closed.
Geplaatst door TomCat on 10/11/2017