John Street was one of the more prolific mystery writers of the genre's heydays, producing nearly a 140 novels in two long-running series under two different pennames, "John Rhode" and "Miles Burton," but Tony Medawar discovered a third, previously unsuspected pseudonym, "Cecil Waye" – adding another four titles to his already impressive bibliography. Not that this revelation made copies any less scarce. 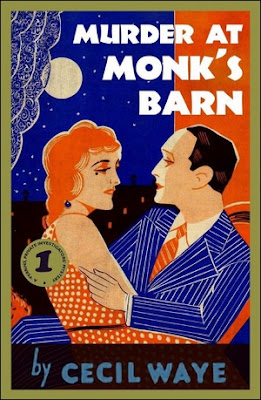 Even during the current reprint renaissance, only a minuscule amount of Street's work has been reissued and honestly didn't expect the Cecil Waye novels to find their way back into print anytime soon. Dean Street Press decided differently and reprinted Murder at Monk's Barn (1931), The Figure of Eight (1931), The End of the Chase (1932) and The Prime Minister's Pencil (1933) back in February. Medawar provided these brand new editions with an informative introduction about this almost forgotten, short-lived series.

A noteworthy point of the Cecil Waye novels is that the detective duties are performed by a brother-and-sister team, Christopher and Vivienne Perrin, who Medawar described as private investigators in the tradition of the 1920s Young Adventurers – like Agatha Christie's Tommy and Tuppence Beresford. And, to my knowledge, there practically were no other sibling detectives during this period.

Anyway, three of the four novels are "metropolitan thrillers," but the first novel is a detective story "very much in the style of the John Rhode and Miles Burton books." What's more, the synopsis promised the unraveling of an impossible crime! There you have another title for that third, hypothetical supplement edition of Locked Room Murders.

Murder at Monk's Barn opens on a cold, dark winter evening in the village of Fordington when Constable Burden returns to his cottage, but duty soon calls again as "a sharp report" brings him back out on the street. A parlor-maid comes running out of Monk's Barn yelling that the master's been shot in his dressing room. Upstairs, the constable finds the body of Gilbert Wynter, an electrical engineer, slumped in front of the dressing-table with a shaving mirror on it and "a bullet wound in the centre of his forehead." Someone had fired a shot from the garden through the window, which requires an "amazing accuracy of aim," but more on that angle in a moment.

The public opinion and local police, represented by Superintendent Swayne, have their sights on Wynter's second gardener, Walter Mintern, who was sacked on the Saturday before the murder. Walter took it very badly and loudly threatened in the public-house "he would get his own back," but Gilbert's younger brother and business partner, Austin, suspects "the whole damn gang" at Fordington of "a damned low-down plot" without exactly knowing why – determining him to find out who killed his brother. So he turns to two private investigators, Christopher and Vivienne Perrin, who have a knotty tangle to unsnarl.

One of the knots is that the murder is something of an impossibility. How did the murderer enter the garden, fired a shot from the shrubbery and escaped unseen with Constable Burden standing in the street within seconds of the shot being heard? How did the murderer knew where to aim? The shot was fired through a closed window with the thick, heavy curtains closely drawn and the bullet had left a small hole in it. So how could the murderer have shot Gilbert? You can't see "a shadow doesn't show through a thick curtain" much less "hit it with a rifle bullet."

You can always rely on Rhode to come up with a nifty trick, or gimmick, good enough to carry the plot and sustain the story, which is a bare necessity with Rhode as his murderers tend to be easily spotted. Murder at Monk's Barn is no exception to the rule. The murderer here is not difficult to find and a second murder removed any doubt, but, once again, you can rely on Rhode to make a second murder as distinctly interesting as the first murder. This time, Rhode used the second murder to show the reader how a plot-technician handles a box of poisoned chocolates and made a good attempt along the way to misdirect readers who had already caught on to the murderer's identity.

So the entire plot rests on how these murders were committed and they were designed to hold it up, but it should be noted that despite the strong how-was-it-done element, it's not a humdrum affair at all – much more lively than your average Rhode or Burton novel. You can ascribe that to having two 1920s-style Bright Young Things as detectives and they added another complication to the case. Austin and Vivienne began to fall in love the moment the police directed their attention at Austin's beautiful motive, ample opportunity and a non-existent alibi, which made her rush towards the solution ahead of her brother. She pieces together the solution from physical clues (e.g. pottery shards) helped by her understanding of human nature. A very well done combination of the intuitionists and realists approach and one of the many details that made this such a rich and rewarding read.

In many ways, Murder at Monk's Barn is a typical Dr. Priestley or Desmond Merrion novel with the how being more important than who-and why, but the detective-characters make all the difference here in both presentation and storytelling. So even with all the familiar touches and usual craftsmanship, Murder at Monk's Barn has something new to offer to readers already familiar with Rhode, but readers who'll be getting their first taste of Rhode can get an idea what to expect (plot-wise) from his other series. If you like what you read, I recommend you track down copies of The Bloody Tower (1938) and Invisible Weapons (1938).