Leonard Thompson was a 16-year-old teenager when he wrote "Squeeze Play," a homage to John Dickson Carr, which he submitted to Ellery Queen's Mystery Magazine without disclosing his age, but the editor deduced his age from the corrections in "a decidedly youthful handwriting" – ensuing correspondence confirmed their suspicion. And came with an offer to buy the story. 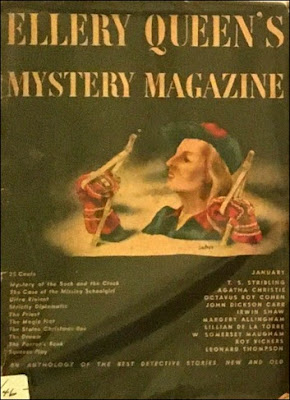 Thompson's "Squeeze Play" was eventually published in the January, 1946, issue of EQMM and introduced as "an absolutely remarkable piece of work" by a 16-year-old with a wholly original locked room-trick "completely worthy of comparison with John Dickson Carr's." But even without the introduction, it's not difficult to see on whose work the story was patterned. Thompson's short-lived series-character is William S. Gray, a drunk, rude and washed-up lawyer, who was obviously modeled on Carr's one-shot detective from The Bowstring Murders (1933), John Gaunt. The central premise and locked room situation were taken from The Judas Window (1938), but Thompson discovered a new angle to that eerie, phantom-like Judas window that only murderers can see through.

William S. Gray unexpectedly gets an opportunity to get back in the game and the prospect of a large fee when Louise Marlowe asks him to defend her husband, Nigel Marlowe, who's a mystery novelist accused of murdering a psychiatrist, Dr. Lane – who treated Louise for a neurotic condition. A jealous Marlowe suspected an affair and made an appointment to confront him, but it ended with Marlowe standing over Lane's corpse with a revolver in his hand. There are enough witnesses and evidence to prove Marlowe was alone with Dr. Lane in his office and the open window was blocked by a door standing ajar. So, if someone did shoot from the window into the office, "the bullet would have to pass through the door," but "there were no holes in the door."

A tight, complicated problem and, to make things even more difficult, Gray only has a week to prepare the case. And tells his client to write a big check to pay fines, because he's "liable to be fined for contempt of court more than once." Courtroom shenanigans and wizardry inbound!

Gray puts on a good show and Judge Thompson (very cheeky, Leo) fines him several hundred dollars for his foolishness and even has to report to his chamber, but Judge Thompson returns to gravely inform everyone that the defense counsel is, mentally and physically, "a sick man" – asking the witness to apology for calling him foolish and refrain from inciting him further. However, it's not all immature tomfoolery as Gray demonstrates how someone else could have fired the fatal show while doing decent job at obscuring the murderer's identity.

You can eventually piece most of it together, but the only thing detracting from this truly inspired piece of impossible crime fiction is that it sorely needed a floorplan. In every other regard, Thompson perfectly captured the essence of a John Dickson Carr-style locked room mystery penned with all the youthful, unpolished enthusiasm of Carr's own 1920s short stories and early 1930s novels, which he wrote when he wasn't that much older than Thompson. A very impressive diamond-in-the-rough that comes highly recommended to fanatical locked room readers and rabid Carr fans. 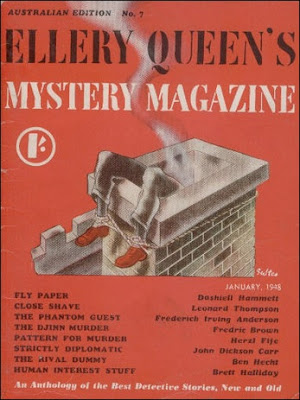 Thompson wrote one more short story, "Close Shave," which appeared in the May, 1946, issue of EQMM and follows the same formula as the previous story. Gray is asked by Julie Sparrow to defend her father, Edward Sparrow, "the most successful criminal lawyer in the country" who has to stand trial for the murder of an artist, Anthony Wills. A difficult case as nobody else appears to have been able to commit the crime.

Edward Sparrow wanted a portrait of himself done and turned to his friend, Wills, who decided to do the painting at his country cottage and they were accompanied by a fun, lively family party – laughing and joking as they drove to the countryside. Wills had grown a shaggy, three-day growth of beard and a target for most of the jokes. So he promised to "shave the damn thing off" as soon as they arrived at the cottage, but, when they were in the washroom together, Wills was shot while saving. Nobody else was in the room beside them. The door was shut with Sparrow standing in front of it and the window "locked, rusted into place." Gray faces a Herculean task of proving the impossible did happen and defending his client on a plea of innocence, which seems like madness.

Luckily, Gray is slightly cracked and, since attack is the best defense, charges into battle with all the grace and tact of a snorting warhorse. He tells the District Attorney that he's fat and lazy, called one of the witnesses a "loose-lipped bum" in court and the bit with his surprise witness would not have been out of place in one of Carter Dickson's Sir Henry Merrivale novels. However, the whole plot and, in particular, the locked room-trick were better than anticipated.

I suspected from the jovial, lighthearted mood of the party that the locked room-trick was a variation on that old dodge of two people staging a practical joke, like a fake murder, but the accomplice turns on the "victim" and makes it real murder – right after everyone thinks the murder had already taken place. A classic locked room technique favored by writers of the Carr-Chesterton school of impossible fiction, but Thompson came up with an entirely different kind of explanation. A trick that's a little less typical of Carr, but convincingly presented and one of Carr's contemporaries would have been proud of it. There's also an interesting sidetrack on ballistics and modified bullets.

Thompson showed much potential in his freshman detective stories and the ending of "Close Shaved" included excerpts "from your Editor's letters to Master Thompson" with constructive criticism and tips. The editor at the time was, of course, Frederic Dannay, who prophesied that the reader was "witnessing the development of a young writer" who "should, some day, be one day one of our most shining lights." A third story never materialized and, to my knowledge, never returned to the detective story as a writer. I've been unable to find out what happened to him or why he stopped writing, but, going by his age in 1946, the obituaries I came across could mean he had long and hopefully good, fulfilling and healthy life. And that's one of the very few things more important detective stories.