I've mentioned in the past how the sheer size and scope of detective fiction, published between 1920 and 1960, never ceases to astonish me as every time I think I've got a pretty good idea what's out there a never-heard of writer, novel or series gets unearthed – which has been the only constant in my genre excavations. This has been increasingly spilling over into other periods, regions and sub-genres of the detective story proper. 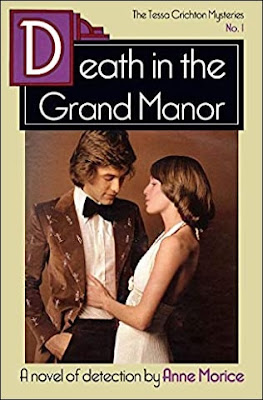 Over the past few years, I discovered a lost generation of traditional, 1960s mystery writers in Kip Chase, Charles Forsyte and Jack Vance. I tumbled down the fathomless rabbit hole of the old-school, juvenile detective story and there's a growing tide of translations of originally non-English mysteries.

Recently, Dean Street Press reprinted the first ten mystery novels by Felicity Shaw, published as by "Anne Morice," who was completely unknown to me, but she made a splash upon her debut in 1970. Morice's maiden novel garnered praise from such luminaries as Anthony Berkeley ("a modern version of the classical type of detective story") and Edmund Crispin ("a charming whodunit"), which was encouraging and profitable enough to continue writing mysteries until her death in 1989. During those two decades, Morice wrote twenty-five mystery novels with most of them starring her actress and amateur detective, Tessa Crichton, but the series faded into obscurity upon her death – remained out-of-print for the better part of three decades. So it was a welcome surprise when DSP announced they were planning to reprint this forgotten series and their new editions come with an informative introduction by genre-historian and professional fanboy, Curt Evans. Let's take a look at her first mystery novel.

Death in the Grand Manor (1970) introduces Tessa "Tess" Crichton as she's traveling down to an unspoiled, out-of-the-way hamlet, Roakes Common, where her eccentric playwright cousin lives with his teenage daughter, Emma, and second wife, Matilda. Toby Crichton had invited Tessa to spend a few weeks at his house, but a two-week long invitation "boded something more than normal cousinly give and take." She doesn't have to wait very long to find out what's behind the generous invitation.

There's a snake in every Eden and in Roakes Common "the snake took the form of a whole family," the Cornford, who lived in the large Manor House. Douglas Cornford had recently bought it as a home for himself, his wife Bronwen and their two boys, but their "surly manners and urban attitudes" began to grate on everyone. General opinion is that Douglas Cornford is quite harmless when left to his own devices, but they hold the foul, anti-social Bronwen responsible for all the trouble – usually perpetrated by her "wretched boys." Interestingly, the Conford boys appear only two, or three, times, but when they do it's as "humpty-dumpty figures" peeking over a wall to make "obscene and cheeky gestures" or bolting from a garden with a frightened kitty in it. Like they were two pestering demons tormenting the villagers. 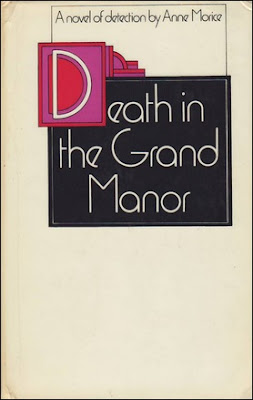 I thought the Cornford boys were an effective and lively background detail, but Morice had to fade them out of this sparkling, lighthearted mystery because they likely had a hand in killing Emma's dog with a barbed-wire trap.

So an anti-Cornford League had began to form and one of Toby's neighbors want him to join, but he, always willing to be contrarian, always defended them "like a brave little Lord Fauntleroy whenever they were attacked." He finally accepted a dinner invitation to hear them out under the condition that he could bring his cousin along. Tess is there on a peace keeping mission of sorts.

While in Roakes Common, Tess gets to experience firsthand Bronwen's personal brand of rudeness and the family's little ways of pestering their neighbors with pungent bonfires or planning to ruin their garden view with the building of some hideous monstrosity. She's also one of the half-a-dozen witnesses of Douglas viciously assaulting his wife and "would have murdered her if he hadn't been prevented in the nick of time." All of this nicely sets the stage for a classically-styled village mystery with a few modern touches, but, as the story progresses, a problem began to emerge. Death in the Grand Manor is undeniably a bright, lively and polished story or, as Crispin described it,"a remedy for existentialist gloom," but Morice used it primarily to introduce her characters to the reader – relegating the plot to a secondary role. Such as Tess meeting the love of her life, Detective Inspector Robin Price, who she marries in the second novel.

So, in detective story terms, the book is mostly padding to couch and stretch out a relatively simplistic plot. Yes, it was quality padding, but padding nonetheless. The plot doesn't really begin to stir until roughly the halfway mark.

When a body finally turns up, face down in a ditch, Tess doesn't begin to act as detective until the last quarter of the story and then only halfheartedly. She tabulates the motives, opportunity and the psychological probability of the suspects, but decided to redo the list with different value when the first result revealed her cousin had "the best opportunity and the flimsiest alibi." She didn't really shine as a detective here and the fact that the story acknowledged it didn't miraculous improve a rather simple and routine plot. Now, I did think the murderer's identity, alibi-trick and motive were a nicely done nod to a very well-known mystery writer, but nothing too complicated and wouldn't recommend it as a continuation of the pure, Golden Age detective story. Just a spirited imitation of one.

However, Death in the Grand Manor was Morice's first novel and she obviously wanted to establish her cast of characters, which came at the expense of the plot, but, hopefully, Murder in Married Life (1971) will have a meatier plot. That one is already on the big pile and the premise sounds promising. So stay tuned!