Lost in Space-Time: "Scenes from the Country of the Blind" (1977) by John Sladek

Back in 2017, I reviewed John Sladek's often overlooked short detective stories, collected in Maps: The Uncollected John Sladek (2002), but there are a few stray stories that, somehow, ended up in his science-and weird fiction themed collections – such as the short-short parody "The Locked Room" (collected in Keep the Giraffe Burning, 1978). Someone at the the time pointed out he wrote another, virtually unknown, impossible crime story about a town vanishing into thin air. 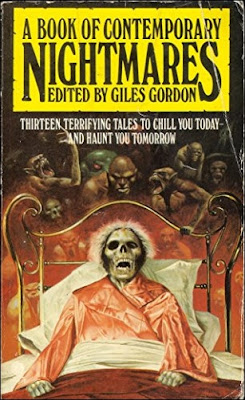 "Scenes from the Country of the Blind" was originally published in the anthology A Book of Contemporary Nightmares (1977), reprinted in the August, 1983, issue of Isaac Asimov's Science Fiction Magazine and collected in Sladek's Alien Accounts (1982). So you know where to find it.

The story concerns three scientists, Latham, Corcoran and Smith, who run the Paranormal Experience Research Group and hope to "pry open a few eyelids" with their experiments. What they try to do is "test for ESP in animals" with a maze experiment involving two groups of rats, which have yielded promising results, but they have to deal with "a creature who swam in a private sea of skepticism," Dr. Harry Beddoes – who's always willing to test their theories to destruction. Dr. Beddoes wields Occam's Razor with "relentless skepticism," which began to annoy Latham. But he has something that might blunt his razor.

In their personal Library of Paranormal Experiences, they have thousands of letters on file from ordinary, reasonable intelligent people who "had some puzzling, even inexplicable experience." One letter told a story both "uncanny and evidential."

Mr. Durkell wrote the scientists to tell how he glimpsed a village, through a small copse, on his daily commute, where he knew there shouldn't be a village. There it was, complete with half-timbered houses and smoking chimneys, only to wink out of existence a few seconds later. Leaving behind nothing but empty fields! The village reappeared a week later, on the same day, which was seen by two witnesses and a road map showed the place, Mons, actually exists. But not for very long! The whole village disappeared a second time and another look at the road map showed nothing remotely close to a place named Mons!

This puzzling phenomena of a village that doesn't exist, except on Tuesdays, coincided with the disappearance of a farmer's wife in the same vicinity. So what's going on?

Dr. Beddoes naturally doesn't believe in a "rupture in the space-time fabric" or "some other universe running parallel to ours" and delivers to Latham a completely logical and rational explanation for the vanishing village and disappearing name on the road map – pointing out all the clues in Mr. Durkell's letter. I've seen variations on that map-trick before, but Sladek came up with something entirely new to make a whole village vanish like a popped soap bubble. Every locked room reader knows how restrictive this kind of impossibility really is, because a moving train, a room or even a house doesn't allow for much wiggle room or trickery. So it was impressive to see him do it with a populated village. My only gripe is that it probably wouldn't work a second time with the same witness. I can believe an unsuspecting person can be fooled by it, but, someone on the lookout, is likely to notice something.

Other than that little niggle, "Scenes from the Country of the Blind" is another weirdly overlooked, practically unknown, but excellent, short detective story by that unsung master of the post-war locked room mystery – effortlessly combining an original impossible crime with a multi-layered, story-within-a-story plot. Just like in "The Locked Room," Sladek told multiple, overlapping stories on a little more than a dozen pages. So more than deserving of your attention and to be considered for a future locked room-themed anthology.