A Vein of Poison


"We're in a sort of hodge-podge of fantasy and harum-scarum adventure that isn't a proper detective story at all. We might be by Michael Innes."
- Michael Innes (The Daffodil Affair, 1942)

A remarkable property of detective stories is that they can be seamlessly integrated with every type of (genre) fiction imaginable, without producing a preposterous and forced sounding premise such as cowboys or vampires in space. They can take place in the distant past or the faraway future, alternate or completely different realities, but still work on both plains – depending on who's writing and plotting, of course.

Peter Dickinson's The Poison Oracle (1974) satisfied itself with roaming the borders of the genre, blurring instead of crossing them, but, personally, I would rank the book among the best attempts of its kind. 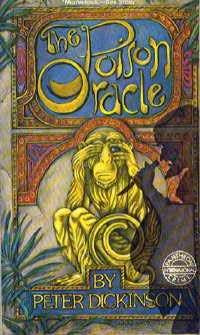 Wesley Morris is a psycholinguistic who's learning Dinah, an unusual bright and pre-verbal chimpanzee, to understand language and to communicate through plastic symbols. An old friend from Oxford, the Sultan of Q'Kut, is bankrolling the experiment and has them brought over to his palace – which has a private zoo attached to it! You guessed it, this is going to be an impossible crime story, but before plunging into a murder enquiry, Dickinson builds a marvelous sand castle in the sky. Q'Kut is a tiny, oil-saturated sultanate with its own culture and history, which is weaved into the tapestry of the plot.

The relationship between the ruling Arabs of Q'Kut and the primitive Marshmen were especially interesting, because the isolated condition of the Marshmen created their own, unique and barely translatable language that's unlike any other. There's a verbal treaty, "the Bond," between the Arabs and the Marshmen stating that the latter would accept the former as their overlords, if they have the marshes for themselves and one of the clans provides a bodyguard for their ruler. As I said before, the treaty isn't written down, but performed once a year in an epic song chronicling the history of the Marshmen and the Bond – which reminded me of the dioramas depicting the Aborigine story of creation in S.H. Courtier's Death in Dream Time (1959). There's a Ngaio Marsh reference in there somewhere.

Dickinson did on a smaller scale what Isaac Asimov did on a universal scale in such books as The Caves of Steel (1954) and The Naked Sun (1957): building a civilization with a history, language, social structure and characters, too!


There's the relationship between Morris and Dinah, which in itself provides enough material and ideas for a separate story. The relationship and communication between Morris and Dinah was somewhat reminiscent of the way Captain Bridger from SeaQuest DSV tried to communicate with Darwin, a dolphin, before meeting Lucas – who broke the code of their language and invented a communicator. As noted, Dickinson roved the edges of the genre without actually crossing them, so no fancy SF-like gadgets here. There's also the heir to the throne, the young Prince Hadiq, who's learning English with the help of a stack of Batman comic books, Akuli bin Zair, "major domo of the Palace and effectively Prime Minister of Q'Kut," and Dyal – a loyal bodyguard for Sultan from one of the clans in the Marshlands. And finally, there's "Anne," who crash-landed in a skyjacked airliner and her influence begins to have its effect on the Sultan. So much that rumors begin to escape from the Women's Quarter that the Sultan’s first wife wants to start sowing poison around the palace. 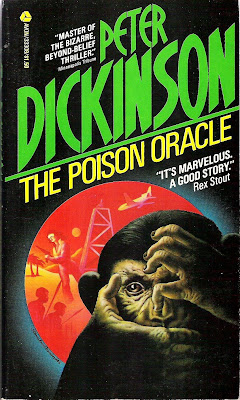 However, it's the Sultan and his bodyguard who appear to have killed each other with poison-laced, hypodermic darts fired from a set of spring-guns and nobody else appears to have been able to have had a hand in both deaths. The solution is a curious, but satisfying, mishmash of ideas that was molded in something new(-ish) that merged wonderfully well with the overall plot of the story.

Anyhow, the neighboring friends and allays of the Sultan are outraged that Marshmen broke the Bond and murdered their friend, which demands for punitive measures to be taken against them, but the marshes are impenetrable and likely to be booby-trapped with poison-dripping spears – and they will fight to the last man. Caught in between are Morris and Dinah, who become an unlikely detective duo as Morris tries to figure out what happened, including a dangerous trip into the marshes, while trying to pry loose what Dinah knows about the murders in a way that he, and others, can understand.

If you have to say anything in disfavor of The Poison Oracle, it's that its depiction of imperialism, slavery and the existence of a Women's Quarter, even if it takes place on a completely imaginary spot of land bordering on fairytale land, probably won't get the stamp of approval from the PC crowd, but how else do you write about a clash of cultures, times and traditions? It's basically a tale of a primitive tribe (Marshmen) coexisting with the settlers (Arabs) in a land that’s encroached upon by Western influences (zoo, new palace, plane crash, etc.) and what happens if they butt heads in the middle – presented as Mitchellian fantasy of crime.


Sometimes a story is just a story and this was darn good one. If Scheherazade were still telling her stories, The Poison Oracle could've easily been one of them.
Geplaatst door TomCat on 9/04/2013