Cream of the Crop

"I hope the bastard appreciates this, yanking out my twat hairs by the root so I look good in a sundress."
- Otto & George

Painted for the Kill (1943) was the first of only three (comedic) mystery novels by Russian born Lucy Cores, whose family packed up and left their home country behind after the Communist Revolution – hiding out in Poland and France before arriving in the United States in 1921. There they made themselves a new home and, twenty odd years later, Cores achieved the American dream by adding her name to one of the grandest pillars of human civilization with the publication of her first detective novel. 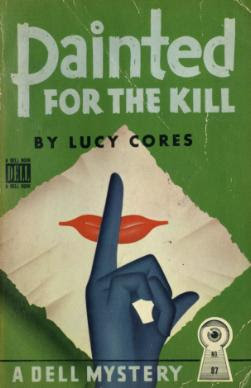 The center of commotion and many shenanigans in Painted for the Kill is The House of Lais, a beauty salon patronized by the upper crust of New York's socialite, which is ruled over by Lais Karaides and her reign resembles that of a small-country dictator. Every morning, at 8:30 sharp, there's a mandatory pep talk before the store opens and the store-manager, Mlle. Illona, drills home the pointers on how to behave towards customers and the importance of brand loyalty. If this book would not pre-date George Orwell's Nineteen Eighty-Four (1949), I would've suspected Cores of spoofing the Stalinist shadow of Big Brother. That very same, dark shadow that caused her family to fled her home... Just a coincidence or the ghost of Harry Stephen Keeler. Moving on.

Cores satirizes everyone and everything, however, it’s not a mere comedy of manners and more closely related to the Van Dine-Queen School of Detection. The story is set in New York among the upper denizens of the city and the scene of the crime is a building, The House of Lais, consisting of multiple floors, through which characters move around – movements which are analyzed and scrutinized. There's a tour of the inner workings of the company. And the detectives are essentially amateurs who quickly develop a friendly relationship with the official police force, in this case Police Captain Andrew Torrent, but the exception here is that they aren't dilettante amateurs killing time by snooping around a fresh crime scene for clues.

Tony Ney is the dark-haired exercise director at Lais and Eric Skeets writes copy for the advertisement department, normally two completely segregated floors, and as to be expected, there's a mutual interest in one another. There developing relationship gives the story ties to the mystery solving couples. As a matter of fact, I was reminded at times of Kelley Roos' debut novel, Made Up to Kill (1940), in which Jeff and Haila Troy were engaged and secured a supporting role in a Broadway play – where murder quickly ensued. Except here the glitter and glamour of the theatre are replaced with the luxurious surrounding of an expensive beauty salon, where the daily routine is disturbed when Lili Michaud, a famous French movie star/refugee, drops in for a special treatment with the Winogradow mudpack.

Before Painted for the Kill morphs into mystery, the hustle and bustle at the beauty salon reminded me of British comedy series like Are You Being Served? So imagine my surprise when Eric Skeets channels Mrs. Slocombe when visiting Tony's apartment and meets Tony's gray Persian, Tom Jones, and remarks "nice pussy," adding, "you and I are going to be great friends, ha, ha." The humor is otherwise more sophisticated than that and Tom shows his disapproval of Eric by favoring Captain Torrent.

Anyhow, Lili Michaud has been left alone in a private-room with a mudpack on her face and quickly fell asleep, but after a while they found out that she's dead and a police investigation reveals that the cause of death was a jujitsu-like blow to the throat.

A murder is feared to be disastrous for business, considering they could only just prevent the press hounds, who followed Lili around, from having an exclusive photo-op with the corpse, but they're booked full the next day – some of them even insisting on being massaged and mudded up in the "Murder Room." Satirizing continues when the detectives, official and non-official, are making up the balance and conclude that, while people had opportunities, they lacked a good motive for the murder of someone who was practically a stranger to them. Their problem is apparently solved when someone else dies under circumstances that appear so identical that it must be another murder, however, the throat of this body is not crushed. Did the murderer's heart succumb under the strain of a guilty conscience? Suicide? Or was it murder after all? And did murder become a little bit more careful?

When the cause of death is revealed I immediately recognized it as a red herring, if Cores hadn't been too careless in revealing the solution and had withheld vital information, because it suggests a solution that genre savvy readers will be more than familiar with. Edmund Crispin and Nicholas Blake wrote two of the better-known examples and if you know your classics, you'll know what I mean when you read the book. I had to reject it because it didn't tally with the information from the story and the actual solution was therefore much better in that it was more original and the arrival came through some well-clued detective work. The solution (and the story as a whole) makes Painted for the Kill also literary ancestor of Herbert Resnicow's Alexander and Norma Gold mysteries. So the only complaint I could possibly have is that Lucy Cores did not went all the way and found a way to this closed-circle of suspects into a bone-fide locked room mystery. Lets call it a cosmetic imperfection in an otherwise excellent mystery.

That leaves us with one unanswered question though: did the Cores family smuggle a time-viewing crystal out of Russia to keep themselves entertained with futuristic pop-culture and prepare for their new lives in America?