The 76th volume of Gosho Aoyama's Case Closed, a.k.a. Detective Conan, opens with a big, five-chapter long story covering nearly half of the volume and starts out as a fairly standard detective story, but then the plot takes a wild left turn and becomes part of the main storyline – revealing the potential presence of a Black Organization spy. A dramatic, double-layered case that began as a routine assignment. 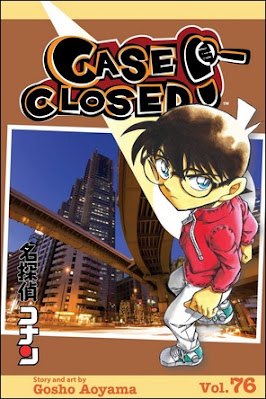 Conan built a website for Richard Moore's detective agency, "Private Eye Extraordinair," which netted him the first paying client who hired him over the internet. And the case looks like easy money.

Kei Kashitsuka found a key to a coin locker in the belongings of her recently deceased brother and hired Moore to find the locker, because "it might something important that could be placed in the stiff's coffin," but text messages about scheduling results in missing each other – returning to the office without having met their client. But upon their return, they notice someone has been in the office and they find their client tied up in the bathroom with her assailant, dead as a door nail, sitting on the toilet. Kashitsuka tells them she came to the office and was met by a man claiming to be Moore's assistant, but he knocked her out with a stun gun and came to in the bathroom "bound with duct tape" when Moore with his entourage returned. The man panicked and shot himself. Only minute traces of gunshot residue found on her body and clothes confirm she didn't fire the gun, but Conan has his suspicions.

So this part of the story is basically an inverted mystery with the question how-and why it was done with the shooting being a (borderline) impossible crime and the motive is tied to a botched bank robbery. During the robbery, a bank teller was shot and his last words form one of the most elegant and natural dying messages I've come across since Ellery Queen's short-short "Diamonds in Paradise" (collected in Queen's Full, 1965). This makes for a nice little detective story, but the situation takes an unexpected turn when Conan is kidnapped and everyone comes into action to find him, which include three of the most recently introduced recurring characters, Toru Amuro, Subaru Okiya and Masumi Sera.

All three of them obviously have ulterior motives to hang around Conan and Moore, but the final page of the story suggests one of them is a Black Organization spy, "Bourbon." Considering the three suspects and Aoyama's style of plotting, Bourbon will probably turn out to be a sheep in wolves clothing pretending to be a wolf in sheep's clothing (i.e. a double agent). A good, eventful story with a new development in the ongoing storyline.

A note for the curious: there's a brief reference in this story to the "Silver Witch Case" from vol. 63, which is a fun impossible crime story about a phantom car that can fly!

Unfortunately, the second story is one of the weakest, most unconvincing stories in the series in a very long time and begins when Doc Agasa, Conan and the Junior Detective League are invited to a barbecue at the home of Sumika and Takushi Konno – a married couple who they met and helped during a camping trip. However, they're constantly arguing with each other and ends with Amy seeing Sumika threatening Takushi with a knife and yelling "I've had enough... I'll kill you." But when Agasa and Conan hurry to the scene, it's a wounded Sumika who's on the floor with a knife sticking out of her body. This could have been a decent enough detective story and one line in particular, "you always get carried away with pranks," suggested the Konnos could have prepared a prank for the young detectives by staging a little domestic murder. Takushi simply took advantage of it to take his wife out the picture in a way that looked like self-defense. Sadly, the solution leaned heavily character manipulation and timing, which was neither cleverly done or very convincing. And the happy, lighthearted ending struck a jarring note with all the drama preceding it.

The third and last story of the volume is a Metropolitan Police Love Story, but this time, it's a thriller! Detective Takagi disappears and a package is delivered to his colleague and girlfriend, Sato, which contains a modified tablet with a live stream – showing Takagi in a precarious situation. Takagi lies flat on his back, tied up and gag, on a wooden plank on a very high construction surrounded by tarp. A noose is tied around his neck and without any clues, or demands, they only have his past cases to go in order to find him. A story ending on a cliffhanger that will be concluded in the next volume.

On a whole, it's not too interesting a story (so far), but one aspect of the plot deserves to be pointed out. This is the second time, in the entire series, Western readers have an advantage over Japanese readers when it comes to a language-based clue, which this time was impossible to hide in the English translation. You've to be denser than Arthur Hastings to miss it. You can find that first story in vol. 55.

So, yeah, it's difficult to rate this volume, because all of its strength is in the first story, but followed by a very weak one and something I fear will turn out to be nothing more than thriller-filler. But then again, if you're this far into the series, you'll be more than happy with the first story!