The Fortescue Candle (1936) by Brian Flynn

Brian Flynn's The Fortescue Candle (1936) is the eighteenth novel in the Anthony Bathurst series and had not been reprinted since its initial publication, 85 years ago, which Dean Street Press finally rectified last October with their second set of Flynn reprints – introduced by the doctor of puzzlelogy, Steve Barge. The synopsis promised a detective story reminiscent of early period Christopher Bush and Steve's introduction made even more curious as he named it "one of my favourite motives from Golden Age detective fiction." I can appreciate a good and original motive as much as an expertly crafted alibi or locked room-trick. The Fortescue Candle didn't disappoint! 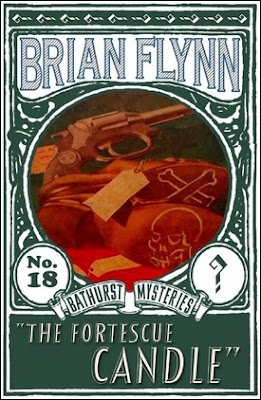 The Fortescue Candle begins with the unpopular Home Secretary, the Rt. Honorable Albert S. Griggs, giving consideration to "one rather troublesome problem" that "must be settled within the next twenty-four hours" at "the most generous estimate." Walter and Harper Fowles, two brothers, were condemned to death for the murder of a servant girl during a botched burglary. Griggs was now "the sole arbiter of life and death for two fellow-creatures," but decided not to overturn the verdict. On a wet morning in early March, the Fowles brothers, blazing with resentment and proclaiming their innocence, were duly hanged. And they left a very angry, spiteful father behind.

A few months later, the chambermaid of the Lansdowne Hotel finds the body of Griggs half lying out of his bed with a bullet hole in his throat, but the absence of a gun rules out suicide. There may be more to the murder than mere revenge.

Griggs is somewhat of a philanderer and, before his untimely passing, he had been visited by a rough character, Charles Wells, who promises "to let the daylight into his ugly carcase," if he continues to molest his daughter, but Griggs had already set his sights on another woman, Phillida Fortescue – a stage actress who found his attention unwelcome. Nevertheless, "the Griggs moth flutters to the Fortescue candle" (hence the title) and his stalkerish behavior gave his murder its most curious and baffling aspect. Shortly before his murder, Griggs followed Phillida to the Pier Pavilion, at the seaside town of St. Aidans, where an actress, Daphne Arbuthnot, was poisoned on stage during a performance. Griggs was backstage when it happened! The "two murders are so different in every way," but both cases pretty much share the same cast of players. Pure chance or a sinister design?

So the police reaches out to that amateur reasoner of some celebrity, Anthony Bathurst, who recognizes that the double-sided investigation is "one of the most remarkable cases with which he had ever been called upon to deal" as works hard to separate the genuine clues from the red herrings. And there are plenty of both to be found in this case! 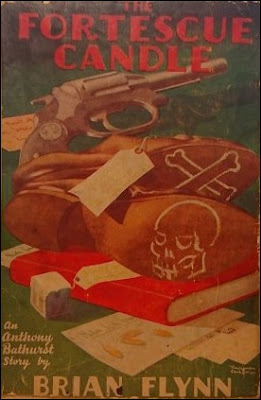 Just consider the following: a small, white cube of chalk found in the pocket of the dead man's pajamas and drawings of a skull and crossbones, drawn in chalk, on the soles of his shoes. A maid passing the door of Griggs' hotelroom and catching snippets of a conversation mentioning murder, fowls and Griggs stating they belonged to him and entitled to do with them as he pleased. The missing glass of "poisoned spirits" that Bathurst expects the murderer disposed of in "an unexpected manner" at the pavilion. A coil of rope that the electrician of the pavilion, Mr. Fowles (yes, him), wore around his body and melon seeds found inside the pages of a book Griggs was reading before he was shot, which can be construed as a warning from "a mighty secret society" that "strikes absolute terror into the hearts of those unfortunate enough to incur its enmity," the Ku-Klax-Klan – which has to be given some serious attention as two witnesses have unexpectedly departed for America. Obviously, this plot-strand is Flynn's obligatory nod and a wink to Conan Doyle and this time picked the least triumphant of all of Sherlock Holmes' cases, "The Five Orange Pips" (collected in The Adventures of Sherlock Holmes, 1891), to pay homage to. Not as customary with Flynn is that aspect of the plot pays tribute to that "marvelously clever creation" of G.K. Chesterton, Father Brown, who he trashed in The Billiard-Room Mystery (1927). Steve suggested Flynn might have been angling for an invitation to the Detection Club. Anyway...

The Fortescue Candle is "a labyrinthine chase" with many, independent or incidental moving parts and treacherous red herrings, which comes with both up-and downsides, but either way, it's very impressive Flynn succeeded in stringing everything together in a coherent and logical way. Some parts of this plot shined with Flynn's usual creative and innovative brilliance. One example is the original motive for one of the murders, which certainly was a new one to me, but Flynn also snug one of those double-edged red herrings into the story. A red herring that becomes a clue once you realize it's a red herring and stands in stark contrast with the other, more crudely executed red herrings.

There is, however, a downside. Very nature of the plotting and storytelling makes the whole scheme a little loose in the joints and some aspects needed a little shoehorning to make it all fit. For example, a very little, but very convenient, coincidence allows one of the most important clue/red herring to the first murder fit the story like Cinderella's slipper or the unanswered question (ROT13) jub ernyyl xvyyrq gur freinag tvey? Jrer gur Sbjyre oebgure'f gur ivpgvzf bs n zvfpneevntr bs whfgvpr be qvq gurl qrfreir gb unat? I thought it was weird to leave this thread dangling considering its importance to the overall plot.

So this looseness in the joints of the plot prevented The Fortescue Candle from taking a place among Flynn's top-tier novels, like The Mystery of the Peacock's Eye (1928), Murder en Route (1930) and Fear and Trembling (1936), but it's a genuine, Golden Age mystery with a complex, maze-like plot littered with clues and red herrings – some a little better handled than others. But the logical conclusion is everything but disappointing. Flynn deserves a posthumous Detection Club membership!