Murder with Minarets (1968) by Charles Forsyte

Earlier this year, I was introduced to the excellent detective fiction of "Charles Forsyte," a penname shared between Gordon and Vicky Philo, who wrote four detective novels in the traditional mold of the genre's Golden Age – three of which Robert Adey listed in Locked Room Murders (1991). Diplomatic Death (1961) evoked the spirit of Clayton Rawson with a murderer resorting to stage illusions at the British Consulate in Istanbul. Diving Death (1962) uses a tight bundle of alibis to create an impossible murder at the bottom of the sea, but their last novel has a surprisingly chatty, character-driven story and plot. 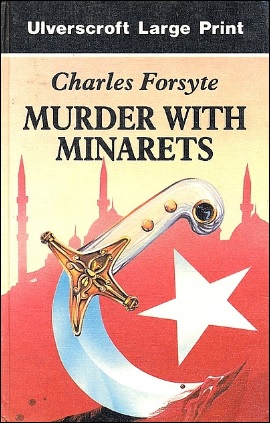 Murder with Minarets (1968) is a standalone mystery novel with the center stage being a block of flats, in Ankara, Turkey, where the British Embassy houses its staff members. Story is mainly concerned with the domestic and social side of the diplomatic life with dinners, social functions and a picnic filling out the story, which is the dominion of the Embassy wives.

Embassy wives "as a breed were no better and no worse than any other group of woman in a small community," but they "could be nearly as devastatingly cruel as small children to anyone who does not go with the herd." Nobody tried harder to belong than the Austrian wife of one of the First Secretaries, Magda Tranter. An unlikable and impossible woman who could have been forgiven her unsuitable clothes, artificial manner and tantrums, but she had "no vestige of a sense of humour" – British "can forgive almost anything but that." But it still comes as a shock when her husband finds her body in the bathtub. Apparently dead of a heart attack.

Magda was under treatment for a weak heart and was buried without any questions being asked, but Paul Tranter is behaving oddly after her funeral and people begin to imagine things. But, as one of them states, "do you really want to hang him?" It's not until Paul dies in that same bathtub that an investigation, official and unofficial, is carried out. This time, it could have been nothing else than murder! But first there's something I need to nitpick about.

Murder with Minarets is listed in Adey's Locked Room Murders as "death by induced heart attack in a locked room," but there never was any mention of a locked or broken down door in Magda's case and with the second death it was explicitly mentioned that the door was unlocked. So not a locked room or impossible crime at all. I suppose the clever method would have allowed for an impossible crime scenario, even with an unlocked door, but, for that to have worked, the murderer needed a dominant alibi. And then you would have gotten an impossible crime akin to Henry Wade's Constable, Guard Thyself (1934).

Nevertheless, even without resulting in an impossible murder, the trick is a clever one and worthy of the bizarre murder methods that was one of the specialties of the Golden Age detective story. Jan Duquesne is one of the Embassy wives who had nagging questions about the death of Magda and, when Paul is killed, she decides to turn amateur detective together with her sister, Gina, and a visiting archaeologist, Christopher Milner-Browne – who's the brother of a Second Secretary, Peter Milner-Browne. But they have to look for the murderer among some very familiar faces. 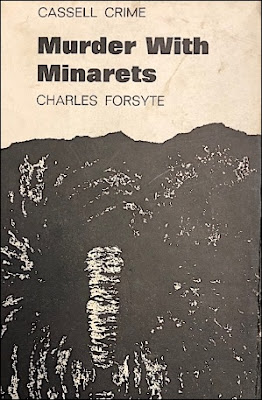 Tom Hadley is Her Majesty's Consul in Ankara and lives with his wife, "Ba," and their two children on the second floor of the Embassy block, which they shared with the Tranters. The thin wall separating the two flats made it impossible not to hear the Tranters rows and Magda's "mid-European tantrums." The spacious flat on the floor below is occupied by the Counsellor, Charles O'Halloran, and his wife, Laura. Peter Milner-Browne has the floor above the Hadleys and Tranters, but there also two outsiders who have to be considered. Francis Allerdyce is a violin professor at the Ankara Conservatoire and had "not only a natural inclination to meet Magda's advances halfway," but "a conviction that it was almost a professional necessity" to do so. And then there's his wife, Doune Allardyce. Most of the clues have to be picked from what they did or, more importantly, what they said.

John Norris said in his review that he had the feeling the female half of the writing duo was in charge of writing Murder with Minarets, which is exactly the impression I got while reading the story. I suspect Gordon's most important contribution to the plot was the murder method. Everything else is exactly what you would expect from the some of (lesser-known) Crime Queens.

To quote John, "the ingenious murder method" is "reminiscent of the kind of thing Christianna Brand would dream up" with "the best clue planting is done in casual conversation," which is another reminder of such writers as Brand, Dorothy Bowers and Helen McCloy. So the plot is very talkative and without the focus on alibis, false-solutions and impossible crimes, the book notably differs from its predecessors in tone and style. But not for the worst!

Murder with Minarets is purely a character-driven whodunit with cleverly planted clues in seemingly meaningless patter or casual remarks, which can make the technical murder method feel a little out of place in a novel resembling a gentle comedy-of-manners – coated with a thin veneer of the detective story. But don't be mistaken! Underneath the chatter and cocktail parties, there's a genuine detective novel that would have been more at home in 1938 rather than 1968. So definitely recommended, but, depending on your personal taste, you might want to begin with either Diplomatic Death or Diving Death.

Hold on! Just one more thing... Over the past year, or two, I've come across three writers, Kip Chase, Charles Forsyte and Jack Vance (Sheriff Joe Bain series), who wrote a few traditional, classically-styled detective novels in the 1960s and abandoned the genre or stopped writing altogether. Does anyone know of any other mystery writers from that period that fit the profile? I would like to read more from this lost generation of Golden Age mystery writers.
Geplaatst door TomCat on 8/30/2020