Over the past two years, Dean Street Press expanded their catalog with reissues of six obscure, hard-to-get forensic detective novels written by a spousal writing team, Edwin and Mona A. Radford, who were strongly influenced by Freeman Wills Crofts, R. Austin Freeman and Ellery Queen – resulting in an amalgamation of the American and British detective story. For example, Murder Isn't Cricket (1946) is a thoroughly British sporting mystery grounded in scientific detective work and littered with challenges to the reader.

I've read all six of them and likely had to wait until DSP reprinted the next three novels in early 2021, but then changed upon a hardback copy (no dust jacket) of one of the scarcer titles in the Dr. Harry Manson series. 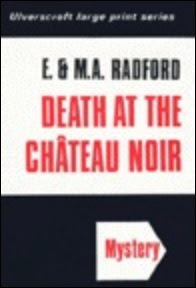 You can't find much online about Death at the Château Noir (1960), the twelfth Dr. Manson novel, except for a small, blurry cover image of the Ulvercroft edition and a brief plot description, "evil kills a succession of owners of the chateau," in a 1990 large print bibliography (PDF). A more detailed synopsis in my copy suggested a detective story reminiscent of John Dickson Carr's "The Devil's Saint," complete with rooms-that-kill, but turned out to be much closer to John Rhode and Douglas Clark. An ingenious little story that produced "a death method unique in the annals of detective fiction."

Dr. Harry Manson is on holiday in Menton, on the French Riviera, where he obverses from a balcony an elaborate funeral procession, "a picture from the medieval ages come to life," passing by which had started at the Château Castellare – "a square, ugly erection of grey stone" with two towers. An ill, foreboding place where death is delivered in "nasty ways" and locals have come to call it Château Noir. So the black château changed owners numerous times over the centuries, but, more often than not, it ended in tragedy. And the present owners were not spared a similar fate.

Angus Mackinnon, "a self-made Yorkshireman," bought the château, but, one day, he was taken ill, developed jaundice and passed away. When his children returned from the funeral, in Yorkshire, their plane crashed. Philip Mackinnon broke his ribs and his sister, Mrs. Lilleth Egon, had her face badly burned, which required months of plastic surgery and recovery.

So another one of those local legends people continue to elaborate on with each passing, but Dr. Manson gets to witness several incidents directly linked to the Mackinnons. Philip Mackinnon unexpected pass away from heart failure and the frightened servants left en bloc, but, even more curious, is Dr. Manson's chance meeting with an old acquaintance, Frederick Burleigh – a legal adviser to an insurance company. Burgleigh was on his way to ask Philip about an inexplicable mistake in his signatures on a £15,000 life insurance policy. You can imagine Burleigh's surprise when Dr. Manson tells him Philip died shortly before his arrival.

However, it takes several months these curious stories and incidents into a case of "death and superstitious beliefs" that "brought again drama to the black château." A case pitting Dr. Manson against a murderer who wiped out a whole family!

Scotland Yard is consulted by two insurance companies who, in a little over four years, paid out the sum of £34,000 on three members of the Mackinnon family who died well before their time. The insurances required a medical examination that in each case "disclosed no evidence of any heart infection" and were all classed "as perfectly free from disease of any kind." So, if they were killed, how was it done. More importantly, why? Because the insurance money is a pittance compared to the money Angus left them.

Dr. Manson returns to Menton to assist the local police in clearing up the matter, but the black château now resembles the deserted Mary Celeste and, instead of working as a scientific detective, he now has to act more as a woolgathering, intuitionist sleuth and historian – picking clues from what was left behind and talking with people who knew the family. Biological and chemical science, as well as the exhumations and autopsies, yield the most important pieces of the puzzle, but the interpretation of some good, old-fashioned and bizarre clues were one of the two highlights of the plot. Such as the marzipan cake, a sun lounge and the key importance of Lilleth's borderline impossible murder. Second highlight of the plot was an impressive juggling act with identities that would have made Brian Flynn jealous.

What also should be noted that, unlike in the previous novels, Dr. Manson has a minor and personal plot-thread, which nets him a fiance, but it barely intrudes on the plot. Alice even hands him an important clue that helped settle the case. I think the Radfords had begun to take notice of the changes in the genre (Death and the Professor, 1961) and decided to give a personal dimension to the otherwise purely professional character of Dr. Manson, which is likely also the reason why they gave him “a new experience” of being “told that he was wrong in an analysis.” The times were a-changing in 1960.

But in every other way, Death at the Château Noir is an undiluted, Golden Age detective novel with a solid plot, bizarre clues and an ingenious method to dispatch an entire family, but the imaginative premise, investigation and storytelling elevated a good plot to excellent. A great how-was-it-done that's no doubt one of the candidates to be reprinted by DSP.
Geplaatst door TomCat on 8/26/2020