Roy Templeman's "Sherlock Holmes and the Trophy Room" is one of three novella-length pastiches, collected in Sherlock Holmes and the Chinese Junk Affair (1998), which came to my attention when reading a fascinating description of the plot in Brian Skupin's Locked Room Murders: Supplement (2019) – a theft from "a locked trophy house" protected with "trip wires, booby traps and a flock of geese." A bit of detective work revealed that two of the three stories are impossible crime tales! So on the pile it went. 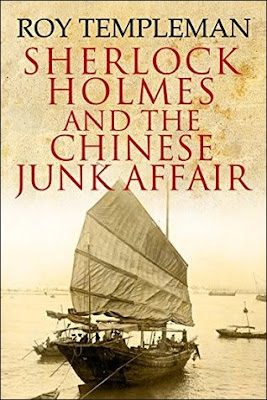 I've never been a huge fan of pastiches and only handful of writers, like Jon L. Breen, Edward D. Hoch and Arthur Porges, wrote pastiches that truly honored or even added to the original source material instead of staining it. Dale C. Andrews and Kurt Sercu's "The Book Case" (2007) with a 100-year-old Ellery Queen is a good example of a pastiche that should considered canon. More often than not, they're nothing more than glorified fan fiction or aspiring authors hitching their wagons to classic, ready-made characters. This is something that's especially true for Sherlock Holmes pastiches, which has become somewhat of a cottage industry.

There is, however, a third, much rarer, kind of pastiche. Pastiches with either good plots, ideas or writing that were depreciated by being presented as imitations.

Templeman's three Sherlock Holmes pastiches definitely fall into this category and can't help but feel that these stories would have been better remembered today, particularly among locked room fans, had he created an original detective character – like a modern-day Rival of Sherlock Holmes. Either that or he should have tried selling the impossible crime ideas to David Renwick, because these stories would have worked remarkably well as Jonathan Creek episodes. Something tells me Templeman had at least watched the first season before he began working on the stories.

"Sherlock Holmes and the Chinese Junk Affair" is the first of the three stories and opens with Sherlock Holmes and Dr. Watson being summoned by Mycroft Holmes to have a private interview with the Prime Minister and a cabinet member, Sir Simon Clayton. Sir Simon has bizarre story to tell of, what could be, either "a huge confidence trick" or "a world-shattering discovery which could topple Empire." Great Britain could be at "great peril" from it. 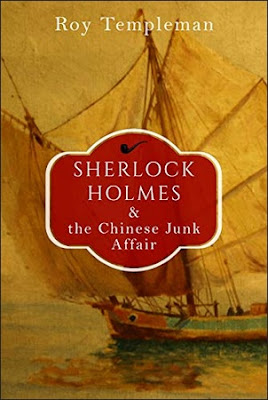 Sir Simon recently rekindled an old friendship with a crony from his university days, Rodger Hardy, who came from a family of industrialists with "a flair for invention," but the family went bankrupt and the ancestral home, Halam Hall, became a ruin. Rodger had gone abroad and nothing was seen of him for years until, one day, he turned up again to invite Sir Simon, to Halam Hall, where he wished to show him something. And that something was a sight to behold! Halam Hall is "an unbalanced architectural mongrel" that had been flogged over the decades with the whims of fashion and individual tastes, which includes an underground ballroom that was left unfinished and down there ten grinning Chinamen were constructing "a full-sized ocean-going wooden junk" – over fifty feet in length. But why was he spending six months to construct a large boat in a place where there was no hope of ever getting it out?

Rodger asked Sir Simon to come down every month to observe its construction and promises all
will be revealed upon completion. When the time comes, the completed vessel was surrounded by poles and caged in with strands of copper wire, which appeared to make a buzzing sound. Rodger told his friend the junk is being "electrically energised" and invited him to join him for dinner, but, when they returned two hours later, the huge Chinese junk that had taken up the whole space of the ballroom had simply vanished into thin air. A situation that becomes even more impossible when Rodger drives Sir Simon to the River Thames where the newly build ship was floating on the water.

So what's the catch? Rodger claims to have invented a way to transpose "matter through space by means of converting solids, by electricity, into waves, which could then be converted back again into the original solid state." And he's willing to part with the secret for the then astronomical sum of one million pounds. British government wants Sherlock Holmes to find out whether they've got the hands on paradigm shifting invention or if they're being trick, which means finding an explanation how the vessel was removed from the underground ballroom to which the door was "too small to allow exit." And how it reappeared on the River Thames.

A neatly posed locked room puzzle cleverly making use of the underground ballroom, because it immediately excluded the possibility that the architectural monstrosity housed two large, identical rooms – promising something more original than a simple piece of misdirection. I'm glad to report that the solution delivered on the promise made by its premise and the locked room-trick made this story the most Jonathan Creek-like in the collection. No idea why it wasn't included in Locked Room Murders: Supplement. 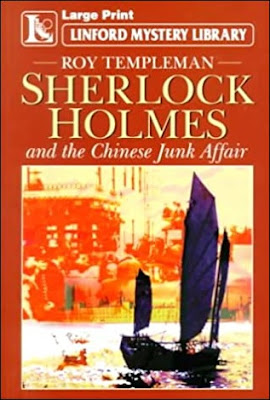 Unfortunately, "Sherlock Holmes and the Chinese Junk Affair" also has some flaws and shortcomings preventing it from becoming a true (locked room) classic.

Sherlock Holmes only deduces the motive behind the scheme, but has to relay on subterfuge to find out how the vessel disappeared from the ballroom and reappeared again on the Thames, which came at the expense of the clueing. So what should have been a how-was-it-done type of puzzle detective story becomes a story about a detective tackling a massive locked room mystery. You can only make an educated guess how it was done. A second problem is that the story is a little overwritten with modern attitudes bleeding through in certain parts, which is true for all three stories in this collection. Each story could have been told in half the number of pages without compromising the plots. Still a highly enjoyable story with an originally worked out impossible crime.

"Sherlock Holmes and the Tick-Tock Man" is pretty much a (historical) travelogue of the Peaks District, Derbyshire, where Sherlock Holmes and Dr. Watson are spending a holiday when they begin to hear about the mysterious death of an old, German watchmaker – who was found in his ransacked home with a head wound. The doctor concluded that the wound was not fatal and that he had died of heart failure, but the villagers believed it was "an unnatural death." A believe strengthened by escaped pet raven of the old watchmaker who has been frantically screaming, "tick tock, tick tock, tick tock. Kiefernzapfen, kiefernzapfen, kiefernzapfen," around the village. The message of the raven turns out to be a dying message by proxy that reveals where the old man had hidden his money, but most of the story has Holmes and Watson soaking in the local color and history. There's a darkly humorous anecdote about a mischievous parrot and the history of "the plague village," Eyam, which is remembered for the way "the god-fearing folk contained the pestilence" by isolating themselves that stopped the plague from spreading to other nearby villages. Here's to your memory, Eyam.

So a very minor, but readable enough, story with a simplistic, paper-thin plot and a holidaying detective that makes it one of Holmes' least exciting and memorable cases.

"Sherlock Holmes and the Tick-Tock Man" convinced me Templeman is either a schoolteacher or an (amateur) historian, but probably a teacher, because I heard the voice of a teacher every time one of these stories slipped into lecture mode.

The last story is the one that got listed in Locked Room Murders: Supplement, "Sherlock Holmes and the Trophy Room," in which Holmes is consulted by Viscount Siddems who recently returned from India with a collection of trophies and eastern armory – building a trophy house-cum-armour museum to store the collection. Viscount Siddems had his house burgled and this made him decide to protect his trophy house, built a few hundred yards away from the hall, with "man-traps, trip-wires to set off shot guns" and "a flock of geese." Geese were used in Roman times as watchdogs because the slightest unusual sound would set up "an unholy honking." 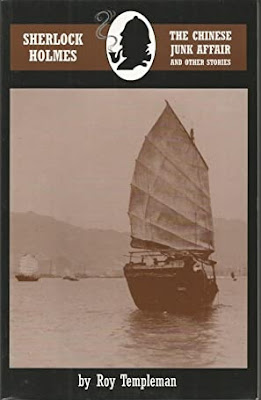 However, these securities measures didn't stop a thief from walking up the trophy house, unlocking the door with a key and taking a Japanese shield from the wall without setting off the flock of geese. So the viscount doubled the number of traps, shotguns and fixed bells to the trip-wire, but the thief simply took away another shield. But how?

Just like the opening story, "Sherlock Holmes and the Trophy Room" shows a lot of ingenuity and originality with how it presents the impossible situation, but this time that's not reflected in the explanation. Such an elaborate setup requires a scrap of cleverness to either put the traps out of commission or circumvent them with a way to keep the geese quiet, but the solution, while perfectly workable and logical, was a little too facile. And underwhelming. Luckily, the reason behind the thefts was good and something Arsène Lupin would have warmly approved of.

So, as some of you probably noticed, my take on the individual stories don't seem to align with the opening of this review, but I believe the flaws and shortcomings of these three stories were enlarged by being pastiches. It comes with certain expectations that Templeman was unable to live up to. But had he created his own detective characters, Templeman could have told his stories on his own terms with the result being something along the lines of Hal White's The Mysteries of Reverend Dean (2008), Andrew May's The Case of the Invisible College and Other Mysteries (2012) and Stephen Leather's The Eight Curious Cases of Inspector Zhang (2014). I think originally created detective characters would have softened some of its flaws.

After all, even as pastiches these were superior detective stories, especially the first one, compared to most what was being published at the time.

Sherlock Holmes and the Chinese Junk Affair and Other Stories is not a timeless classic by any stretch of the imagination, but it's a well intended collection of stories written by an enthusiastic amateur with a commendable interest in locked room puzzles – something that was too rare in the nineties. So recommended to the ferocious locked room reader and addicted Sherlockian who'll read everything with the name of the Great Detective printed on it.
Geplaatst door TomCat on 8/03/2020