On October 5, 2020, Dean Street Press is going to drop the second set of Brian Flynn reprints, comprising of books 11-20 in the Anthony Bathurst series, which includes a title with all the promise of being as much as a classic as The Mystery of the Peacock's Eye (1928) and Murder en Route (1930) – namely Tread Softly (1937). Steve Barge, the Puzzle Doctor, wrote the introductory pieces and described Tread Softly as having "a truly unique plot" that, to his knowledge, has "never been imitated." So my inner fanboy was squealing with delight when I found a review copy in my inbox. 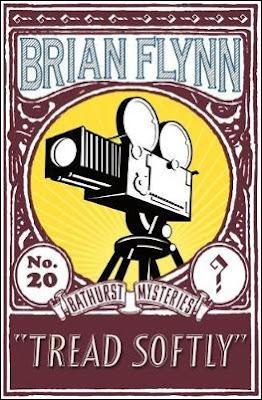 Tread Softly begins with Chief Inspector Andrew MacMorran, of Scotland Yard, consulting the Sherlockian gentleman detective, Anthony Bathurst, on what should have been a cut-and-dried case.

Claude Merivale is a reasonably successful stage-and screen actor, of independent means, who appeared to have been happily married, but one day, he turns up at the Yard to announce he had strangled his wife, Vera Merivale – whose body was left in their bedroom. The police immediately went out to investigate and found that the facts were exactly as he had stated, but "the defense that he's putting up is so extraordinary" that he very well may "leave the New Bailey a free man." What he claims has happened is that "he dreamt he was being attacked by a number of people" and he fought back, but in the struggle he turned to his sleeping wife, "seized her by the throat and strangled her." Supposedly, this happened in a state of semi-conscious unconsciousness.

A hardly credible story, to say the least, but with an eager counsel for the defense, a highly reputable medical expert, a hypothetical motive and a presentable suspect who obligingly confessed suddenly placed the case for the Crown in jeopardy. MacMorran wants "to hang the woman's murderer" and there only three weeks left until the trial starts.

Anthony Bathurst, astute and helpful as ever, promises MacMorran to look into the case and raises a number of points the police missed, or neglected to investigate, because the murderer had come down to the Yard and volunteered to full story to them – a story that checked out. So there was no reason to delve deeper until they realized the strength of the defense. And while some time has elapsed, Bathurst still manages to unearth a clue or two. Such as a seaside snapshot of Claude and Vera, the position of the seating of a deckchair, two hidden tickets to a dance party at a fashionable night club and nail-scratch on the body that shouldn't be there. Flynn even shows the reader a scene where Bathurst is not present and tells the reader that, had he witnessed the scene, it would have "proved invaluable to him in his initial attempts to understand thoroughly the psychology of the case." You don't often get a bonus clue, but they don't make the core problem any clearer. 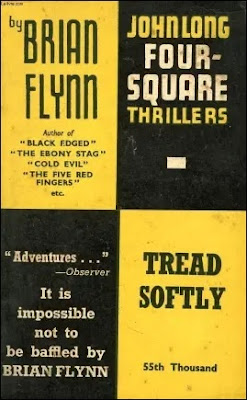 You're never exactly sure what you're reading. An inverted mystery with a murderer who plays a high stakes game of bluff poker? A whodunit posing as an inverted mystery, because Claude Merivale was either framed or shielding someone? Or perhaps an early precursor of the psychological crime novel? These possibilities kept me puzzling along with my first suspicion being something along the lines of Harriette Ashbrook's The Murder of Sigurd Sharon (1933), which had at the time of its publication a startling original and unique solution, but it didn't hold water for long. A second, more traditional, idea formed around the facts that Merivale locked the bedroom door behind him and went straight to the Yard instead of the local police, but that one didn't hold either. Before you know it, you've arrived at the last two chapters of Part One, "The Trial" and "The Verdict," which didn't conclude in the way I expected.

There's not much that can be said about Part Two without giving anything vital away except that it involves a recently finished movie, The Painter of Ferrara, which linked to a second death with all the ingenuity of the Golden Age that was briefly teased as an impossible crime – because a towel went missing from the locked crime scene. So how does it all stack up? Is it as good as people say it is? Well... it depends on what you expect.

Steve noted in his introduction that Flynn always tried to do something different with his novels and the style, or framework, "shifts from courtroom drama to gothic darkness, from plotting serial killers to events that spiral out of control." Where Tread Softly can be called original, or unique, for its time is how the plot is presented and played out, but not how it's resolved. Part One is a modern crime novel decades ahead of its time with Part Two returning to the proper, Golden Age-style detective story with one of those devilishly murder methods. So, needless to say, I preferred the second half over the first half.

I'm a little cautious here, because I don't want to overpraise Tread Softly and give the false impression it's another The Mystery of the Peacock's Eye, The Murders Near Mapleton (1929) or Murder en Route. Tread Softly is not that kind of detective story. What it is, is another fine example of the creative versatility of Brian Flynn who continues to emerge as one of the most unjustly forgotten mystery writers of the genre's Golden Era. You can look forward to reviews of The Padded Door (1932), The Edge of Terror (1932), The Horn (1934) and The Fortescue Candle (1936) in the not so distant future.

A note for the curious: Steve and Kate were the first to review Tread Softly in 2017 and 2018 and they were less hesitant in praising it as a masterpiece.
Geplaatst door TomCat on 8/12/2020