I promised in my previous review to return to the detective story's shining era and initially it was going to be a toss-up between two options, Christopher Bush or Brian Flynn, but there's another name from Dean Street Press' stable of resurrected writers who has been criminally neglected on this blog – namely "kindly Mr. Punshon." There's one of his detective stories that I had set aside for a very specific reason. 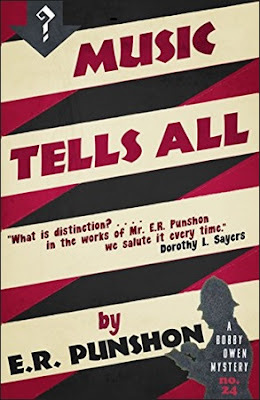 E.R. Punshon's Music Tells All (1948) is the twenty-fourth Bobby Owen mystery and a very rare instance of two series-characters crossing paths. Crossovers always have been one of a guilty pleasure of mine.

Curt Evans wrote in his introduction that Dorothy L. Sayers "affectionately dubbed" Punshon's first series-detectives, Inspector Carter and Sergeant Bell, "that blest pair of sirens." Carter and Bell debuted in The Unexpected Legacy (1929) and appeared together in five novels, published between 1929 and 1932, in which Sergeant Bell did all "the hard work of actually collecting facts and deducing solutions" – while the publicity-seeking Inspector Carter "received all credit and promotions." As if Punshon had reconceptualized the Sherlock Holmes series with "Holmes as a preening fraud and Watson as a wise drudge." I expected DSP would complete their Punshon run with his "earlier, critically-lauded" Carter and Bell series, but the last Bobby Owen novel (Six Were Present, 1956) was reprinted in 2017. But, as of this writing, the Carter and Bell series is still out-of-print.

So I really should have gone with either Suspects – Nine (1939) or So Many Doors (1949), but the lure of a genuine and extremely rare crossover was too great a pull. Even without having encountered Sergeant (now Superintendent) Bell while he was still working alongside Inspector Carter. A decision that I'll no doubt come to regret when my review is followed by the surprise announcement that the Carter and Bell series will be reissued in 2022. Anyway...

Music Tells All opened a new chapter in the series as Bobby and Olive Owen returned from Wychshire, a rural county where Bobby acted in various capacities and eventually became the Acting Chief Constable (It Might Lead Anywhere, 1946), which provided a sometimes dreamy and magical backdrop for nine novels. Such as Ten Star Clues (1941), Diabolic Candelabra (1942) and There's a Reason for Everything (1945). Now they're back in London and the post-war malaise is putting its stamp on British society.

These were the dark days of food-and petrol rationing, clothes coupons, societal upheavals, poaching and crime waves – not to mention a severe housing shortage. So, upon their return to London, the Owens find themselves living in a hotel room without hot water, because "the hotel's stock of coal had run out." Everything was in short supply. Olive couldn't believe her eyes when she notices an ad in the newspaper that a charming cottage to be let near the village of Much Middles. Only twenty miles from London. Bobby is very skeptical and believes the place is either unaffordable, haunted or merely a practical joke, but they receive an invitation to view the cottage. And they end up getting "the cottage on a three-year lease at a rent of a hundred a year." More of a heist than a bargain during those days, but the Owens find they have a strange lot as neighbors. 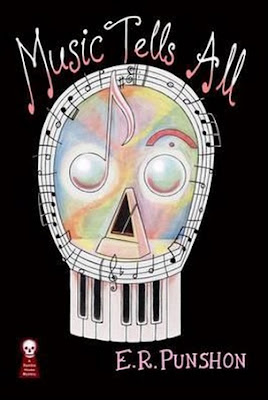 Mr. Fielding is their landlord and a semi-retired city speculator who's a chubby, good-tempered with an almost childlike trustfulness beaming from his candid eyes and exuding general air of a happy, which is "strangely unlike those supposed to mark the professional speculator he was describing himself to be." Bobby briefly glimpsed another personality underneath his friendly exterior. A brief, unguarded moment when Fielding went from "beaming like a happy child upon a friendly world" to "an Ishmael whose hand was against every man as every man's hand was against him." Fielding has a curious, double-edged attraction with the Owens next door neighbor, Miss Bellamy, who has an otherworldly aura about and plays "passionate, possessive strains" on her grand piano. The music "flowing passionately" from Miss Bellamy's cottage has a strange, appealing effect on everyone who hears it and the vicar, Mr. Gayton, believes there's a pagan element to her music. There are also a brother-and-sister, George and Rhoda Rogers, who share a cottage and they're as curious a pair as everyone else in the neighborhood. George Rogers is a self-professed scholar, "engaged on a most interesting inquiry" to prove that the Old School Tie "an unconscious symbolism of the infantile desire to return to the safety and comfort of the maternal womb," as well as being an outspoken pacifistic and conscientious objector during the war, but reportedly got his ass handed to him in a scrap with Fred Biggs – who's Mr. Fielding's battle-scarred chauffeur. Rhoda served in the Middle East as part of the A.T.S. and received a recommendation when opened fire with a tommy gun on two Egyptian spies in the pay of the Nazis, which prevented important secret documents falling into the wrong hands. Well, you can't pick your neighbors.

So, while Olive begins working on the cottage, Bobby returns to Scotland Yard and now holds the temporary, undefined position of "temporary-acting-junior-under-deputy-assistant-commissioner." A result of the war having depleted the ranks of the C.I.D. and a meeting is planned to reorganize the department, but until then, they have to begin to stem the tide of a growing wave of crime with the primary focus on an epidemic of smash and grab raids. This assignment places Bobby smack dab in the middle of a very cheeky and daringly-staged crime.

One of the smash and grab gangs somehow managed to coincide a jewel robbery with a Scotland Yard test from a suitable place from which to send out a test alarm of a smash and grab raid. A motor cyclist put a phone booth and the wireless in Bobby's car out of action with a spanner, which leads to a high speed chase with the mysterious cyclist seemingly inviting Bobby to pursue him. A merry-go-round leading straight to Much Middles where the motor cyclist performed a "vanishing act" near the cottage of one of his new neighbors. And he thought he recognized Fred Biggs in the motor cyclist's mannerisms. But he has "a complete alibi." Why did this smash and grab raid practically lead back to Bobby's own doorstep? Was there a reason behind their incredible luck in getting the cottage during a housing crisis? 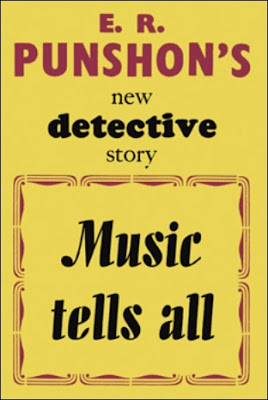 A problem that takes on a whole new complexion with the discovery of murder victim, shot to death, inside a disused, half demolished air raid shelter at the bacl of Fielding's house – a dispatch case is found underneath the body. A dispatch case crammed with jewelry, but not the smash and grab loot. All of it's "dud stuff" barely worth a fiver.

Bobby is placed in a difficult position and is more than a little relief that the murder is the official responsibility of the self-effacing, mildly cynical Superintendent Bell. And, while Bell the general routine of the murder investigation, Bobby probes the people involved to see how, or where, the smash and grab raiders overlap with his next door neighbors or that mysterious, haunting music. A task not made easier with suspects and witnesses who are either missing, lying or unwilling to cooperate with a second murder complicating the case even further. This second murder provides the story with its best idea and a great answer to that "perennial difficulty in murder," which concerns how to dispose or hide a dead body. Unfortunately, the idea is not used to its full potential here, because Music Tells All is not exactly a conventional, Golden Age detective story.

Punshon was born in 1872 and in his late twenties at the dawn of the twentieth century, when the modern world began to take shape, but remarkably, his detective novels were hardly updated relics from the past. They were very much of their time and sometimes even (far) ahead of their days, but there were also some very clear clues and hints that Punshon belonged to a previous generation. Punshon had an old-fashioned, melodramatic streak, but never the corny, over-the-top kind like can be found in Anthony Wynne's mystery novels – who truly arrived on the scene two or three decades too late. Punshon could be genuinely dark and brooding, unashamedly indulge in the macabre and the imaginative or produced something that was years or decades ahead of its time (see the very modern The Conquerors Inn, 1943). More than once, Punshon gave me the impression the classic ghost-and horror genre lost a great name when he decided to write crime-and detective fiction (see the ending of The Dark Garden, 1941) So you can never be quite sure which direction one of his mysteries is going to take or in what way it's going to end.

Music Tells All is not a detective story in which Punshon pulls out a string of clues and red herrings from his sleeve with a murderer tied to it at the end. Music Tells All is a tragedy of characters posing as an early police procedural (of sorts) with the strains of haunting music and crossover element making everything curiously reminiscent of one of Gladys Mitchell's criminal flight of fancies. Yes, the solution is, for better or worse, somewhat Mitchell-like in nature. So you can file this one under "acquired taste." Sorry, Jim!

Nonetheless, I very much enjoyed my time with Music Tells All and a return to Punshon was long overdue, but readers who are new to him are advised to begin at an earlier point in the series. Such as Bobby Owen's debut as a fresh-faced constable in Information Received (1932), Death Comes to Cambers (1935) or the previously mentioned There's a Reason for Everything. I'll probably return to Bobby and Punshon before the end of the month.