Some Kind of Monkey Business

"Why, the English countryside is one congealed mass of intrigue and petty spite. That is why almost every murder story is placed in a country town or in some remote village, where all the natural passions have free play."
- Miss Boddick (Stanley Casson's Murder by Burial, 1938)

On the back-cover of my Pan Books edition of Death Comes to Cambers (1935), Dorothy L. Sayers asks "what is distinction," which is not easy to define, but, instinctively, it's recognized in those few who achieved it and ascended to the first ranks.

Sayers asserts that we recognize it in the Sherlock Holmes canon, E.C. Bentley's Trent’s Last Case (1913), A.E.W. Mason's At the Villa Rose (1910), G.K. Chesterton's Father Brown stories and "in the works of Mr. E.R. Punshon we salute it every time" – which I tend to agree with after reading three of his detective novels. 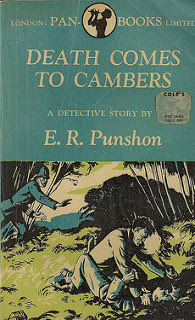 Death Comes to Cambers has Punshon's series-character, Detective-Sergeant Bobby Owen, staying as a guest at Cambers House. Lady Cambers has reasons to believe burglars are sneaking about the house, coveting her expensive collection of jewelry, but Owen soon finds himself engaged in a murder-investigation.

One morning, her ladyship fails to appear for breakfast and her bed hasn’t been slept in, which eventually leads to the discovery of her body on a damp, cold and trampled field just outside of the house – strangled to death! As to be expected, the centerpiece of Lady Cambers' collection, "Cleopatra's Pearl," is missing from her safe and there are signs someone had been staking out the house during the night. But robbery isn't the only possible motive for the murder.

Lady Cambers' husband, Sir Albert, wanted to separate from his wife, one way or another, in order to marry another woman. There's a nephew, Tim Sterling, who became her heir, but resented the way in which she wanted to run his life and bumping off his aunt would've brought freedom – in addition to a considerable lump of money.

A motive of a different nature comes from the local vicar, Mr. Andrews, who's a rabid creationist and objected fiercely to Lady Cambers financing an archeological excavation in Frost Field. Which is where her body was found. The excavations are being carried out by an equal fanatical and arrogant Darwinist, named Eddy Dene, who hoped his theory about the true genesis of man "would make as big a sensation as Darwin's Origin of Species."

Those are only the obvious lines of enquiry, but there are more suspects and motives strewn about the place. It makes for a nice, if somewhat typical, 1920s-style country house/village mystery.

However, John Norris from Pretty Sinister Books remarked in his review of the book that it took a considerable amount of pages to move away from routine police work and "enter the realm of originality," which is a valid complaint.

Bobby Owen and Colonel Lawson, chief constable of the country, do have a spot of routine work to take care of, before Owen can get to the meat of the plot: which consists of a pair of clever ciphers, posted in the agony column, and a genuine original, if somewhat bizarre, alibi-trick. But how much this preliminary groundwork and series of interviews is a reduction in quality really depends on how much you care about relatable or likeable characters, because there aren't many of them in this story and can bog down some readers in its first half – which wasn't a problem for me.

What I did found disappointing about the first half is that the feud between Dene and Andrews wasn't used to greater effect, which would've benefited the overall story if such vignettes had been interspersed with the interview.

The parts that did touch upon this feud were interesting and even had a bit of a Chestertonian flavor, because "the age-old conflict of the priest and the scientist," who are "both right and both wrong," has a paradoxal quality about it when their relationship was described as follow: "the one mistrusting too much reason, and daring to doubt where truth may lead," while the other mistrusted "too much faith, and daring to doubt where love might go" – concluding that both are "so tremendously right" and at the same time "so presumptuously wrong."

I wish there had been more of that, as well as more on the archaeological excavations, but Death Comes to Cambers is a very well written and (eventually) cleverly plotted mystery novel, which demonstrates why Punshon was so highly regarded during his lifetime.

If you want to take a crack at this book yourself, there's a new edition from Dean Street Press with an introduction penned by our very own Curt Evans.
Geplaatst door TomCat on 10/27/2015